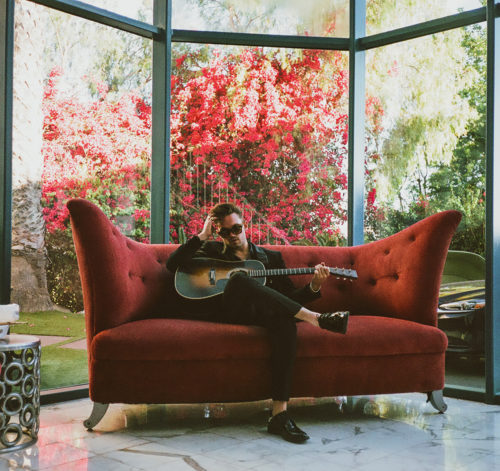 “Ontario based, Slaight Music singer-songwriter Sam Drysdale released his new EP Testarossa on January 28th via Cadence Recordings/Ingrooves and all streaming platforms. The inspiration for Testarossa comes from the Italian word for “redhead” aptly named after the chic 12-cylinder, mid-engine sports car manufactured by Enzo Ferrari between 1984-1996. It represents the next step in the speedy evolution of a talent that is gearing up to be at the forefront of pop music. His sophomore effort includes the earworm-ish first single “Dream About a Girl,” a mid-tempo ballad where Drysdale uses his arresting tenor to weave a netherworld between reverie and reality, and the light-hearted single “Shitty Famous,” referencing Sam’s time living in L.A. Romance is the ongoing theme throughout the EP also, including the title and focus track, “Testarossa,” an upbeat song inspired by the 90’s supercar aesthetic. Born in Kitchener-Waterloo, ON, and raised in Guelph, ON, Sam was influenced by his musical family who introduced him to a wide range of artists from Bruce Springsteen to Pink Floyd. He moved to Los Angeles at 17 to attend the Musicians Institute, and later moved to Nashville at the age of 21, where he collaborated with producer-songwriters Davor Jordanovski and Paul Brown on a six-track Indie EP entitled The Fight. Two months into that release, one of the tracks, “Dear Jane”, was anonymously submitted to Slaight Music’s annual It’s Your Shot online competition. Sam won the competition and was welcomed as the newest member of the Slaight Music family. Sam relocated to Toronto and continued to develop his artistry, releasing his second EP, Vicelove produced by Thomas “Tawgs” Salter (Lights, Walk Off the Earth, Scott Helman) in 2019. That collection included “Like a Man” and “Wasted.” Sleek, stylish, and sporting the sheen of sophistication, pop provocateur Sam Drysdale puts the pedal to the metal on this new EP.”

I was a pretty late bloomer. Both of my parents play music in some capacity and they really wanted to get me into it at a young age but it just didn’t interest me. The first time I ever really sat down with Comfortably Numb (Pink Floyd) when I was 15 was probably the eureka moment.

I have essentially zero formal training. Training in hard skills like music theory/music production are incredibly useful and I’ve only recently begun to appreciate how important they are. For me, the training was listening, and watching my idols. When you really love what someone is doing musically, and you fancy yourself a musician, you pay such close attention to them that you’re bound to learn something!

Jimi Hendrix, Johnny Cash, John Mayer, Bruce Springsteen, Sam Cooke, Amy Winehouse, The Weeknd, Lana Del Rey, Jessie Reyez. This list is always changing, but everyone I’ve just mentioned has been a rock when it comes to how they carry themselves in their career. They seem to be single-minded in their approach and motivated only by the music they create. That’s incredibly inspiring.

I make pop music…but it’s bourbon soaked. My goal is always to get something made that doesn’t sound contrived. I love pop sounds but for me, they work best when paired with well thought out lyrics and a fresh perspective on a simple feeling.

The last song on my new Ep Testarossa, is called “Snowfall In July”. Currently it’s my favourite song that I’ve released. I’d recommend pairing it with recently made-legal flowers.

I hope to provide an all-around compelling experience. Not just in the music but in the way things look, flow, and feel. I’m lucky to play with some of the best musicians in Toronto and they always make me look far better than I am. Big shoutouts to Chris MacFarlane, Evan Porter, and Kairon Haynes. Come out to a show sometime – and say hi afterwards. Fans are family to us.

Spotify! Apple Music! YouTube! Amazon Music! Everywhere. I really take pride in some of the visuals we’ve created for this recent release so definitely stop by the YouTube channel if you get a second. Thanks for having me.