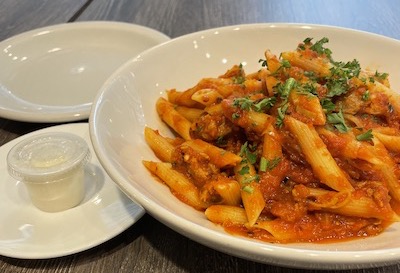 In the slowly arriving East Toronto neighbourhood of Corktown, the opening of a new restaurant is somehow simultaneously common and thrilling. New establishments open on the PanAm-developed blocks between the distillery and the don river all the time- a pricey 24hr convenience store is the newest acquisition; before that, a furniture company inexplicably opened offices in a large storefront at the base of a condo- but real restaurants remain confusingly sparse. A couple of underwhelming take-out places, a middling brewpub, some over-priced Thai and Middle-Eastern cuisine- that’s the whole lot south of King (and there’s not much up that way either). So when a slew of signs went up on a large corner space advertising an impending Italian eatery, the many occupants of the many condo buildings that dominate the area were psyched to say the least.

In late summer 2021, Vivo Pizza + Pasta finally opened on the corner of Front & Rolling Mills Rd. It was a chain and Italian is rarely my first choice, but nevertheless I was quick in the door.

I have never been back. It’s a Corktown curse, I guess. The quest for a great neighbourhood restaurant continues.

Vivo is a slick, sparse place that prioritizes style over comfort. The furniture is hard white plastic and metal and the aesthetic vision seems to just be “green accents”. The wait staff is young and cool though not particularly attentive or knowledgeable. The menu is peppered with Italian key words for faux-authenticity but is mostly just split between an uninvitingly limited pasta selection and uninspiring pizza list. Calling a few basic salads and mushy arancini “antipasti” reads like cynical marketing considering how Americanized the dishes feel.

But I’m not a stickler for authenticity if the quality is good, so I dove into the titular pizza + pasta experience with my hopes still somewhat high even after the arancini. Alas, the pizza crust, though correctly Italian in style, was somehow both flimsy and charred, the toppings oily and undercooked. While the signature Vivo pizza with salami, roasted red peppers, and olives, was underwhelming, at least it was enjoyable in the sense that it was pizza. The Patata white pizza with caramelized onions and pancetta, on the other hand, was such a droopy mess that it demanded a fork, or surrender. I chose surrender. The situation brightened slightly when I turned to my penne arrabbiata with sausage and leeks. It was bland and kind of goopy but at least it wasn’t dramatically overcooked. Then I accepted the offer of parmesan… and was provided a little plastic cup of cheap powdered “cheese” from an unrefrigerated bowl on the bar.

Nearly everything on the menu at Vivo is $17 ($12 for a caprese salad, somehow a whopping $19 for fried calamari), which sounds too high even before you realize a comparable dish of pasta will only cost you an extra $2 at the considerably more upmarket Terroni. If Vivo were far less expensive, its simplicities and shortcuts could be, if not forgiven, at least tolerated. I’m all for a slap dash option now and then, especially in a neighbourhood with a lot of overpriced fare. But that’s not who Vivo wants to be, it’s not how they market themselves at all. So what we’ve got in practice is a wannabe nice, authentic place that is ultimately not much better than an East Side Marios (and I would argue actively worse than an Olive Garden or Bertucci’s, which are at least homey and fun). There’s something in the combination of a performatively Italian menu with the cheap powdered parmesan that I can’t get over. It’s one thing to not quite have your moisture control perfected on the tricky potato pizza- that’s an execution issue, that could improve- but cheap powdered parmesan is a declaration of values when it comes to Italian food and tells you everything you need to know about Vivo Pizza + Pasta.