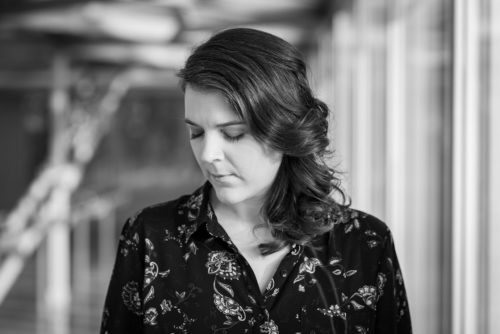 “S.K. Wellington is a Calgary-based singer/songwriter that has been writing and performing music for over a decade. After leading the band The Wellington Folk for 8 years, S.K. took a departure in 2018 and decided to move forward as a solo act. Sitting in the “perfect pocket of folk, pop, indie, and rock”, S.K.’s song offerings are reflective, poignant, poetic, and hopeful”.

I started writing songs when I was just a kid, plunking around on the piano. I think I really only realized how seriously I wanted to take my musical career when I finished university and actually started recording.

Are you trained? How did you develop your skills?
I got my Grade 8 classical piano from the Royal Conservatory of Music. I learned how to chord and play more modern styles through my church involvement when I was a youth. I also played trombone throughout highschool and half of University in jazz bands and concert bands. I am so thankful for the diversity of musical experiences and training I’ve had. Song writing has just been a persistent craft since I was really young. I’ve learned so much from the variety of producers and musicians I’ve had the privilege to work with over the years.

Who are some of your biggest musical influences?
Early on, Tracy Chapman, James Taylor and Chicago were definitely my writing influences. More recently I have been influenced by Tim Baker, David Ramirez and Maggie Rogers. All folks I have followed along their music journeys.

How would you describe your sound?
Depends on the day. A music reviewer once said the sound fits “in the perfect pocket of indie, folk, pop and rock” or something like that and that resonated. Those are the genres I play in for sure.

What’s your favourite tune in your repertoire and why?
I played in a band called The Wellington Folk for a long time and we have three studio recordings out; I still play many of the songs I wrote for that band. I honestly think my favourite tune is the song I wrote for them called “In Reverie”.

What can audiences expect from one of your live shows?
I like to bring a lot of authenticity and connection to the audience to my shows. They tend to be really informal, energetic, and I try to make every show feel meaningful for the folks who are there.

Where can we find your music?
Basically anywhere music is found these days. Spotify, Apple Music, YouTube, etc. My other projects are on those platforms as well.