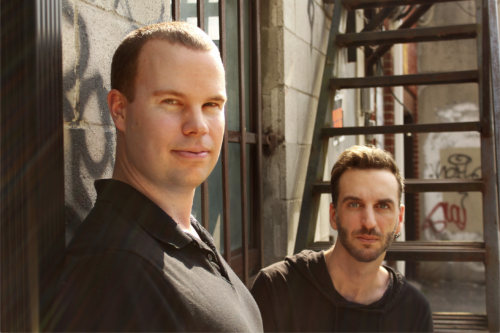 “Taktus is a marimba duo known for their groove-based re-envisioning of classical and contemporary music. Their 2020 album Mirrored Glass earned a spot on the CBC’s “Top 20 Classical Albums of 2020” and was nominated for “Instrumental Recording of the Year at the ECMAs. The band just released “Music in Contrary Motion,” an early Philip Glass piece reimagined for the marimbas. The original piece is inherently frantic, but the band tried to capture a sense of peace and flow with the warm characteristic of the marimbas. The release has been paired with a ‘Black Mirror’ inspired visual that incorporates snapshots from nature”.

When did you know you wanted to be a musician?
Greg: When I used to soundcheck drums for my dad when I was little. Also, I realized I wasn’t good at anything else.

Jonny: I knew I wanted to learn to play the drums when I was young and my older brother was part of a rock band that rehearsed in our basement. The decision to pursue music as a profession came later, when I was in high school, and I had a couple very influential music teachers.

Are you trained? How did you develop your skills?
G: I did my undergrad at Acadia University and my master’s at U of T. During that time I was constantly writing music and forming bands with friends.

J: I did an undergraduate degree in music at Mount Allison University, and then a master’s and a doctorate at the University of Toronto. That’s how I developed my technique and musical knowledge, but being a musician is about so much more than that. I’ve learned the most about musicianship and artistry by collaborating with other great musicians and composers.

How would you describe your sound?
Minimalist, Trance, Ambient, Percussive, Instrumental.

What’s your favourite tune in your repertoire and why?
Music in Contrary Motion by Philip Glass. We chose this piece for our music video because we love how captivating it can be. Conceptually it is quite simple: just five note repeated over and over in different octaves and always moving in contrary motion. But the hypnotic rhythms and relentless drive created by the ever-expanding pattern of the music make it a really engaging piece for us to play.

What can audiences expect from one of your live shows?
To hear something they likely haven’t before: unique marimba arrangements of minimalist and groove-based pattern music paired with electronic processing, MIDI synths, and much more!

Where can we find your music?
Bandcamp
Ravello Records
Centrediscs
Spotify
Youtube