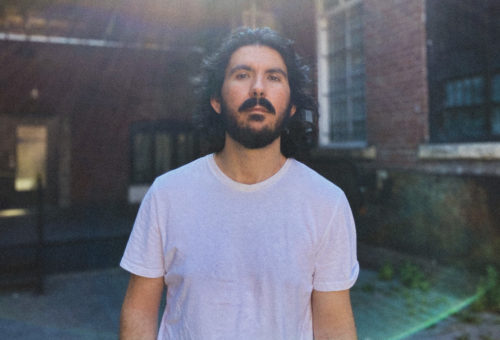 “Alex Southey (he/him) is a singer-songwriter based in Toronto/Tkaronto, Canada. He performs regularly in and around the city. His full length LP entitled …And the Country Stirred received placement on Canadian icon Eric Alper’s Indie 360 Spotify playlist, and two placements on Exclaim! Magazine’s Eh List Spotify Playlist. His latest release My Nights On The Island offers a six song revision of a break up that breaks the mould of what one would traditionally ascribe to a ‘singer/songwriter’s record of lost love.’ The EP feels like a sonic-cinematic journey; a short film of songs carefully crafted with orchestral flourishes and soundscapes that Southey drew from memory in his teenage years – sounds that intentionally weave the songs together and act as essential supporting cast to the leads of voice and guitar and even threaten to create sequels of their own”.

When did you know you wanted to be a musician?
Thanks for the question! I’d say it’s come and gone throughout my life. From the time I got super into music (11-13), until the end of high school, and then again after university, it kept coming up as a real want. When I eventually moved home from BC to Toronto, I figured it was now or never (at 24-25). Here we are. I’m trying to work as hard as I can to make up for lost time.

Are you trained? How did you develop your skills?
I had maybe one or two private lessons with a guitar teacher when I was in that early stage, and later in high school my friends and I took “guitar”. Credit to its teachers, but by that point we were made unofficial class helpers where my friends and I helped teach other kids. All this to say, I wasn’t trained, but spending hours playing along to Led Zeppelin and Radiohead instead of drinking and going to high school parties served as training.

Who are some of your biggest musical influences?
Ironically, not Led Zeppelin, but definitely Radiohead. Other folks such as Aimee Mann, Fleet Foxes, Wilco, etc. are huge influences. Feist, as well, and City and Colour, both coming from the Canadian folk scene.

How would you describe your sound?
It’s an amalgamation, probably, of a bunch of the instincts I gained from listening to all the above artists. I think I also developed my sound based on what I felt like I wanted to see in music. That’s where it all comes from. It’s a mix of a compulsion and not seeing what I want to see yet. All in all, it’s experimental folk. The experimental umbrella allows me to really do what I want in terms of accompanying arrangement. Sometimes it’ll be fiddle and lap steel. Other times it might be electric guitar. Usually, there is a string element on there. I find it suggests the greatest amount of drama and emotion, and I like that element in my music.

What’s your favourite tune in your repertoire and why?
Right now, my favourite tune is probably a song I wrote on my last album called “Little Country Mouse”. It’s become a favourite amongst some of the people coming to see me more often. A lot of my music is soft and emotional. This is emotional but it contains a lot of anger, as well, and it’s story-based. There’s a thread you can follow throughout the whole thing, unlike in some of my other songs where the lyrics are maybe a little more metaphorical or imagistic.

What can audiences expect from one of your live shows?
My live shows are entirely acoustic. At the moment, I don’t have a band, so what audiences will hear will be stripped down. I think it’s unlikely that between now and whenever COVID ends I have a band. After that, I will begin seeking a backing band in earnest because eventually I’d like my live sound to expand what’s on the record, or play-with. Right now, it’s very sparse.

Where can we find your music?
Anywhere you stream music! Spotify, Apple Music, Youtube, Amazon Music, etc.! Subscribe to my social channels as well, as I’m always updating the info, and keeping audiences in the know!