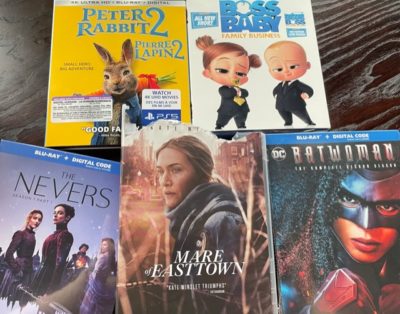 Welcome back to our on DVD series featuring new releases from Warner Brothers, Universal, & Sony Home Entertainment (review copies have been provided, all opinions are our own).

New TV: A lot of the TV we’re highlighting this season are ambitious dramas led by badass ladies on a mission.

Though technically the latest blu-ray/dvd release from the CW’s super-verse is Batwoman: The Complete Second Season, Batwoman was basically rebooted in its second season after the premature departure of series star Ruby Rose. Jacivia Leslie takes over the suit now though the real star to watch continues to be Rachel Skarsten who delivers a tour de force every week. At $44.98 (all prices in Canadian dollars), this is the most expensive title on this list by far and as a general rule you shouldn’t be spending nearly $50 on outdated technology ever but the CW is still making 18-episode seasons so the content at least sort of backs up the price in quantity at least. I’ll also recommend Superman & Lois The Complete First Season, which drops on October 19th for $30 for the dvd; it’s a solid first season for a late entry into the super-verse. Similarly, the first season of the new Kung Fu is a refreshing title in this realm and is another new series steal priced at $30. (Note: The Flash Complete Seventh Season is also available October 12th for $44.98. It’s actually my favourite property in the CW superverse but you know the deal with The Flash already and don’t need to be told whether or not to buy the home release. Same with Legends of Tomorrow The Complete Sixth Season, which is cute but it’s either your thing or not).

Over in the world of prestige TV, Emmy-annihilating HBO hit Mare of Easttown came to dvd September 14 for a pretty reasonable $29.98 . The limited series is only seven episodes but it’s seven episodes of prestige movie star TV plus four featurettes. (Fun off-topic story: my dog literally ate this screener. The discs were fine, but she had a good munch on the case while I was out of town. She’s lucky she’s cute). Snowpiercer‘s second season went uneaten though so I was able to check out the ambitious follow-up to the uneven first outing from this apocalyptic Netflix adaptation. Further away from the shadow of the movie, season two embarks on a rare “what happens after the climax?” narrative that I think we need more of. Plus the set is only $25.

The Nevers: Season 1 Part 1 comes out October 5th on Blu-ray and while it’s priced identically to Mare of Easttown and I actually personally like this show better, I’m a bit annoyed that Warner Bros is pushing the home entertainment release at full price when they only released half a season this year. Though production values on The Nevers are very high and there are quite a few extra features (special care is, of course, taken to minimize the show’s cancelled creator), it’s not worth $5 an episode. A big box set version of this show once it’s completed with real, in-depth behind-the-scenes is worth waiting for.

The colder months saw the release of a couple more family friendly options, though in opposite ways. The favourite show of cool middleschoolers/philosophical man children Rick & Morty released a beautiful steel case set for their fifth season with some truly excellent special features that take you into the process of creating the iconic cartoon. On the other end of the spectrum, the treacly new Waltons adaptations dropped on dvd and it’s perfectly fine if you’re into that sort of thing.

Children’s Movies: full disclosure, I’m not a fan of either of the franchises we’re highlighting this month. Neither Boss Baby: Family Business nor Peter Rabbit 2 delivers the kind of non-cynical, non-condescending fun I’m looking for in a kids movie. Boss Baby especially just fills me with rage (I’d like to say the rage is about capitalism but it’s mostly about Alec Baldwin). Peter Rabbit is better (and it’s got great human casting with personal favourites Rose Byrne, Domhnall Gleeson, David Oyelowo and Margot Robbie all in the mix) but I just don’t think the world needed a whiz-bang CGI adaptation of Beatrix Potter’s notably gentle tales and we really need to be done with James Corden now please.