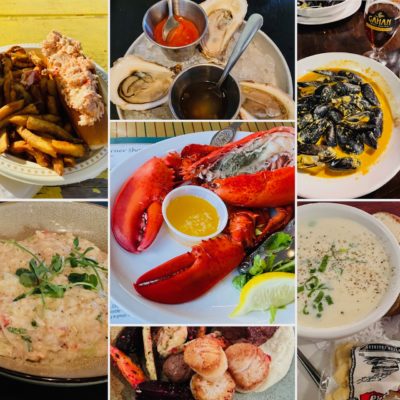 A Seafood Tour of Charlottetown

I live in Toronto, a great city where I’m very sad to report it’s outlandishly difficult to find a good bowl of seafood chowder. I went to school in Boston, so it’s possible I’m spoiled, but the fact remains that Toronto really ought to step up their game in this particular department. Seafood in general is a tough one for Toronto with our lack of ocean proximity driving the quality down and the prices for the good stuff sky high. It was with this tragic reality in mind that I embarked on my recent trip to Prince Edward Island with the goal in mind of eating exclusively seafood. I didn’t quite make the “exclusively” part happen but I got pretty close.

I started my weekend with the idea of sampling every lobster roll I could find. Charlottetown is a small city but they know what the people like so the number of lobster rolls on offer quickly overwhelmed me and I ended up only having two. The first was at the Chip Shack, a charming little stand floating on Peake’s Wharf that TripAdvisor absolutely insists you try at least once. I tried it twice. Knowing that it was a planned stop on my scheduled food tour, I stopped by to try the lobster roll before doing literally anything else on the island (literally I took a Covid test and a nap, then I had this lobster roll). $20 for a roll and fries seems to be about standard in Charlottetown (you’ll pay nearly 40 in TO) and the heaping mound of superb double cooked fries served by the delightfully sassy proprietor of the Chip Shack made this a particularly good deal. Though the fries were a real winner (PEI’s potato game is, of course, on point; more on this later), I have to admit that my first real east coast lobster roll left something to be desired. Served with no embellishment on a simple buttered bun, I think Chip Shack’s got the concept exactly right but their execution is iffy. The cut in the bun isn’t deep enough to hold much or prevent what is there from falling out and the filling is much too fine with no big chunks of lobster meat to sink your teeth into. It’s in the name, come to the Chip Shack for the chips.

The second lobster roll I had was on Experience PEI’s Taste the Town Food Tour, which I highly recommend (you can read more about it HERE). It was at the aptly named Lobster on the Wharf where they serve lobster on the wharf. This roll went the opposite direction, giving me the chunky lobster mix I was after but too much lettuce and not enough butter made this one a lot less fun. The oysters (and the view) were actually the bigger hit here.

Taste the Town also brought us to The Gallery Cafe where we had a nice but unremarkable magic bar and coffee with iffy cream and back to the Chip Shack for another side of those excellent fries. The true highlight was Gahan House where we were each served a “half order” of mussels and a full glass of locally brewed beer masquerading as a “sample size”. This full meal was not only generous considering the $69 price tag for the whole 3.5hr tour but it was the best food I had in Charlottetown. We were given the choice of about six different beers (I chose a malty ale called Island Red which was pretty good in my non-beer-drinker opinion) and two types of mussels. Other members of the tour seemed pleased with the gin & cream sauce but I wouldn’t have traded my coconut curry for anything. I’m not usually a big fan of mussels but the rich sauce clung to them perfectly and was worth eating with a spoon. It broke my heart to leave the leftovers behind in the absence of bread to sop it all up.

Though I abandoned my quest to try every lobster roll in the city, I came pretty close when it came to seafood chowder. It’s very difficult to name a favourite as every bowl I tasted on PEI was head and and shoulders above any other chowder I’ve ever been served (sorry, Boston). Upscale Sims Corner and the humble Water Prince Corner Shop both serve their chowder with fantastic biscuits and no crackers to mess with the perfectly calibrated texture of the soup. Water Prince’s is chunky and flavourful, a small cup included with the $39 lobster dinner (an experience that felt mandatory but, aside from the chowder, was pretty ho hum). Sims’ chowder is spiked with salty bacon to balance delicate fish and whole mussels. I ordered it as an appetizer before an overpriced steak that stood no chance of being remembered in comparison. If I absolutely had to choose a favourite chowder, I’d likely give it to Pilot House by a hair. Served with oyster crackers and small slices of pillowy bread with impactful lemon/honey butter, Pilot House’s chowder features large chunks of PEI potato and plenty of fresh seafood. It was complex and creamy but not heavy or overpowering, a real winner. I followed up that chowder with a surf & turf of under-seared scallops and smoked brisket that was overshadowed by the side dishes: crisp roast carrots & beans, tender beets, and brilliant smashed new potatoes that contrasted bright apple parsnip puree. Though I came to PEI for the seafood, I’d be remiss not to mention that every single potato dish I tried was out of this world.

Like mussels, oysters are not usually my idea of a good time (I maintain that they taste like opening your mouth underwater, which I guess is what people like?) but my When in Rome attitude necessitated I try at least a couple. I wish I could remember the specific types I was served at Claddagh Oyster House (the lovely waitress, perhaps sensing I wasn’t exactly an oyster expert, offered to put together a selection then spoke very quickly when telling me which was which). Suffice to say, I was impressed with how far PEI was able to pull me towards foods I don’t like at home, though I can’t quite say I’m a true convert. I followed up those oysters with lobster risotto because I like to reward adventure with comfort and risotto is one of my very favourite things. This one was too salty but it was still lobster risotto so complaining seems stupid.

I can’t vouch for the dessert menu at any restaurant in town because I skipped the sweet stuff every night in favour of stopping by Cows Creamery on my walk home. The iconic ice cream shop is a must-taste for PEI visitors and the ultra-Canadian flavours like Nanaimo Bar filled me with glee. I was excited to try the buzzy Truckin’ Roll Ice Cream on Saturday night but was heartbroken to find a note taped to their truck saying it was too hot outside to serve.

The rest of my Charlottetown culinary adventure was defined by Founders’ Food Hall, the starting point for many tours and the central hub of most activity in downtown Charlottetown. I found myself there quite a bit and quickly developed a problematic love for Doughnuts by Design, specifically their Mars and maple flavours. Receiver Coffee also has two locations near/in Founders and they took a lot of my money as their top notch iced lattes quickly became my saviour on an uncannily hot weekend.

If you’re planning a trip to Charlottetown and want the best food advice I can give you, here it is: take the Taste the Town Food Tour if you’re looking for a great way to get on your feet and see the city while you eat. Or just skip right to Gahan House for the coconut curry mussels. Make sure you stop by the Chip Shack for some fries and, if you find a truly great lobster roll, let me know about it @MyEntWorld. Most of all, eat all the chowder and potatoes, you can’t go wrong.