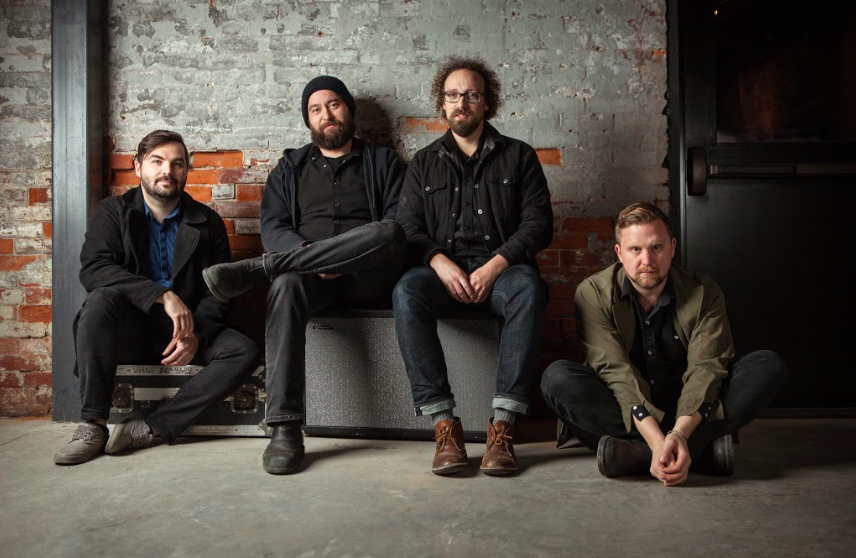 “Kill Chicago have a careful knack for weaving heartfelt messages through boisterous rock’n’roll. Natural storytellers with a political core, this New Brunswick-based quartet has made a name for itself through electrifying live shows and an honesty that reflects their blue collar history. Their new album, The Fix (releases November 8th, 2019) amplifies their dissent with relatable working class anthems, breaking the fever dream of societal expectations. Digging deeper into their storytelling roots, The Fix sees Kill Chicago take aim at contemporary issues – education, economy and the politicization of the modern era – while relating the personal subject of mental shifts that accompany parenthood. The release of The Fix follows some much deserved accolades, with their previous album, The Grey, being awarded Music NB’s Album of The Year (2016), and performing on the ECMA’s Rising Star stage (2018) as well as a slew of regional festival slots. When not performing, Greg Webber (guitar/vox) teaches music at Fredericton High, developing the next generation of artists; Drummer Zach Atkinson is owner and promoter at the legendary venue The Capital, and both Matt Bowie (bass) and Dillon Anthony (guitar/keyboards) are seasoned veterans of the east coast music scene. Together, they’re politically-charged and community-minded, thick-skinned but with a sentimental core.”

When did you know you wanted to be a musician?
When I was in high school I distinctly remember having a moment at a camp party sitting by a fire. I was playing acoustic guitar with some other people and I had the thought of cutting out the middle man. I saw a lot of people’s parents doing what they loved on the weekend, and I thought this was wasting a lot of time. They were working jobs so they could afford their passion. I just wanted to skip that step. My mother was a teacher and wasn’t long to put the pieces together that playing and teaching music would be a really fun way to live.

Are you trained? How did you develop your skills?
I don’t think I have any skill most days. But I have had skill at moments for sure. I did a Bachelor of Music at McGill University in Classical Guitar and Instrumental technique (basically Band Directing) Though I am a trained musician it’s impossible to keep up the skill level that I had when I was playing for 6 hours a day. The one downfall to teaching full time is my job is to watch other people practice. Thankfully when I began playing guitar, (trombone was my first instrument and I played in school band until grade 12) I also began writing songs on day one. I didn’t wait to get technically proficient before I began writing; and I think this allowed me to always trust my ears and not my fingers.

Who are some of your biggest musical influences?
I’m a huge fan of The Clash, Elvis Costello and The Talking Heads. Not only do I line up with their music, but their political stance as well. I connect with the idea that playing music can maybe transmit an important message. It’s funny, I have a lot of music that I used to love but as I get older the lyrics really don’t hold up. It’s hard as a father of a little girl to really get behind most rock lyrics, so I find it’s easy to cite those three bands because they were talking more equally about the world.

How would you describe your sound?
Exactly like a mix of those last three bands but rural.

What’s your favourite tune in your repertoire and why?
I actually love “Made Up”, which is not a single. So many of the tracks on this record are the result of a great deal of shaping and trial and error; but “Made Up” fell out of me as if it had always been sitting there. I think it took 5 minutes to write a 2:16 minute song. The song also captures how our band can turn on a dime and I love how short the song is…no fluff.

What can audiences expect from one of your live shows?
The best part of playing in Kill Chicago is that we’ve been friends for so friggin’ long that we’re  genuinely happy to be together on stage. It can go the other way at times, and that history can allow us to fight dirty, but usually once we hit the stage we’re in High School friend mode. We try our best to lead the room in energy. I remember Kenny from Moneen telling me “they will only give half of what you give.” We like sing alongs and crowd involvement. I think it’s cool when a performer can just stand there and be enough, but I’ve never felt comfortable ignoring the audience or getting into my own music.

Where can we find your music?
We are on every platform and we have Vinyl and CD’s for sale on Bandcamp. Here are the links:
iTunes
Spotify