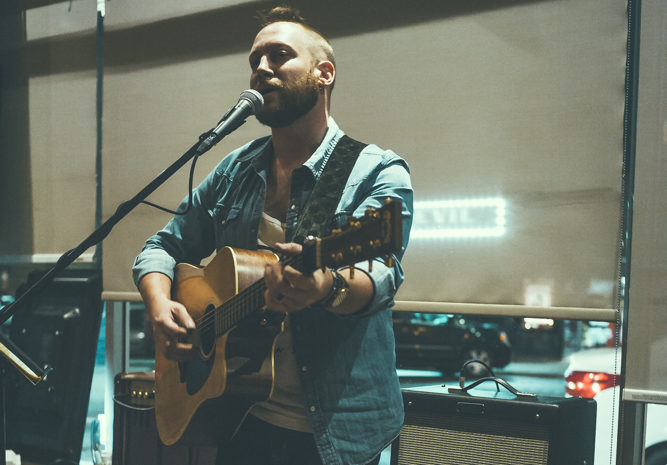 “B.Knox didn’t just have a hidden talent; he was a hidden talent, until now. A school teacher, who wrote songs for himself, only in 2019 did he consider a career switch to music. His first single Deep Dark Love gained international attention with airplay on SiriusXM, CBC Radio, placement on top streaming playlists and future in-store airplay in stores like Starbucks (worldwide).  He returned this summer with his new single ‘Corners’, a reflection on life and the choices we make. The B-side, ‘Stars and Burnt Bridges’ continues on the thematic and poetic themes of love, loss, and life. With his debut album Heartbreak & Landscape, a rootsy, imagistic, alt-country masterpiece set for release later this year— a new Canadian storyteller has emerged”.

When did you know you wanted to be a musician?
That’s a tough question. I suppose I have always dreamed and fantasized about it from the time I was a child. However, I took the more practical route first and got university degrees, but I was always a little bit restless. I finally decided to give up teaching and my other business endeavours and commit to music in just the last year of my life, really.

Are you trained? How did you develop your skills?
I took music courses all through High School and into University, but to say I’m classically trained in any area would be false. I took piano lessons as a child. I played tenor sax throughout high school. In University I took classical vocals and some history and theory in music. Later I took some musicology courses. On guitar I am self-taught, and in terms of songwriting, it has always been something I do alone. In terms of developing my skill set, I played guitar by picking up a Mel Bay chord book, and then played along by ear to the songs I liked. Eventually, I discovered tabs and online videos, but that didn’t come alone until later. I’m naturally left-handed, but I forced myself to learn right-handed, which is great because it is easier to find guitars to play, but it eliminated any natural ability I might have had. With songwriting, I studied English Lit. in University, so I read a lot and was exposed to a lot of styles. I was always writing and found that process natural, even as a child and student.

Who are some of your biggest musical influences?
It is pretty varied, but the major staples in songwriting are Bob Dylan, John Prine, Gord Downie, and newer folks like Dan Mangan, David Ramirez, Harrison Whitford, and Kathleen Edwards. Musically and melodically, I’m drawn to bands like Wilco, Blue Rodeo, Bry Webb, and Altameda.

How would you describe your sound?
I would say that my sound is “Americana”, if you can put a label on it. There are definitely heavy nods to traditional elements of folk, roots, and blues music.

What’s your favourite tune in your repertoire and why?
It changes all the time, but my first single, “Deep Dark Love”, is both musically and lyrically relatable and connective, which is something I always strive for when I’m writing music. On the upcoming album there is a song called “Hurricane Breeze” which I think is the song that most articulately captures my “sound”. It is cinematic and dark, but also just a little larger than life, sonically.

What can audiences expect from one of your live shows?
My live shows are centred around lyrics. I want to create connection and empathy and compassion in a crowd. We can all have an individual feeling about a song or its meaning, but we share it connectively in a live space, and I love that – like a multi-faceted prism of thought and emotion. I play both acoustic and electric during my shows, but it is almost always solo, with the odd exception here and there.

Where can we find your music?
My Music is just about everywhere: Spotify, Apple, Deezer, Amazon, Soundcloud…you name it. The first single is available on vinyl, which will be available from my website, once it is up and running properly. You can also hear “Deep Dark Love” on SiriusXM NorthAmericana, channel 359.