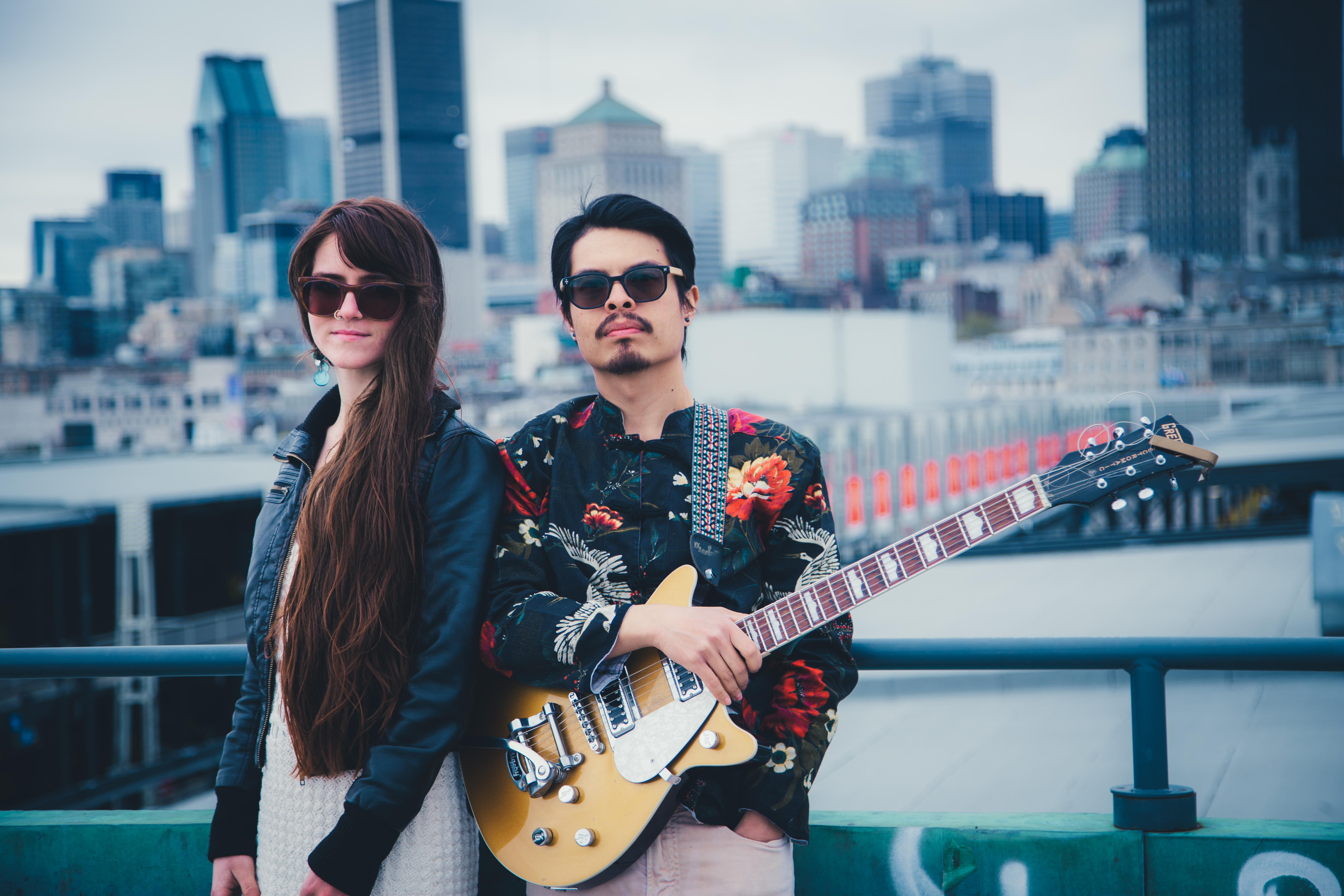 “Jitensha is an indie music duo based in Montréal. The project consists of Canadian musician David Martinez and US-born performer Erin Rose Hubbard. These two charismatic musicians create upbeat, insightful, songs with a highly emotional concept, combining catchy melodies and indie aesthetics with understated song writing skills. The pair focuses on personal themes such as self-discovery, determination and empathy. Jitensha is the Japanese word for bicycle, which serves as a metaphor for the power of human energy. The direction you choose, and the energy you put in, determines where you end up!”

When did you know you wanted to be a musician?
Erin – I honestly don’t remember. I was very young. My parents made music professionally up until around the time I was born and there were various instruments all around the house. I am an only child and I would play around with everything and sing endlessly. I got a mini, red, electric squire guitar and would pretend to be Tom Petty or Mark Knopfler. Musically, I’ve taken a lot of turns in my life but it’s always been inescapable.

David – I was in my second year at Laurentian University in Sudbury, Ontario, and I was in a double degree program taking on a BA in music and Bachelor of Education.  It was actually the summer before going into second year that I started thinking about dropping out and trying to pursue a career as a solo singer songwriter, but I wasn’t completely sure, so I said I’d give myself another year at Laurentian to figure it out.  But halfway through the year I had already been resolved, I wasn’t coming back next year.

Are you trained? How did you develop your skills?
Erin – My parents taught me some guitar very young. I would bang around on the piano. Around age 9 I started to play the cello. I did that all through high-school, eventually being in the Colorado state youth orchestra. I have this education to thank for teaching me harmony and rhythm. After that I taught myself various other instruments – now I’m quite happy playing the drums. Thank goodness for Youtube.

David – I’m classically trained in piano and guitar but that feels like ages ago.  Most of my work that I do now on the electric guitar is self taught, I can’t say I’ve had a formal teacher on the electric guitar. A big turn in my development as a performer happened when Rose and I got hired to work on a cruise ship as the lounge duo.  We had to learn so many songs and playing everyday really kicked my butt.

Who are some of your biggest musical influences?
Older influences – The Beach Boys, The Beatles, Sam Cooke, Hall & Oats,

How would you describe your sound?
Peppy, harmonious male and female vocals, unabashed electric guitar, and simple, dancing drums coming together in an amiable effulgence.

What’s your favourite tune in your repertoire and why?
Our favourite tune at the moment from our repertoire is “Sea Of Numbers,” which is on our 2nd album Periscope. It’s a song about acceptance. We started writing “Sea of Numbers” after watching a documentary on string theory. We were inspired by the scientists and mathematicians, who searched endlessly for the answers of the universe with equations. We thought “wow, maybe the universe could just come down to numbers – maybe we’re just numbers too.”

So we set off writing music and lyrics, thinking about how it felt to be one in 7 billion. We realized, there’s a sort of freedom in accepting that you’ll never know anything for sure. I think a lot of people are resonating with this idea.

What can audiences expect from one of your live shows?
They can expect fun, upbeat, euphonic tunes they can move their feet to as well as some more ambient, and poignant. At the end of our shows, an audience can expect feel high-spirited, energized and also a bit introspective.

Where can we find your music?
Streaming: Spotify, Apple Music, Soundcloud