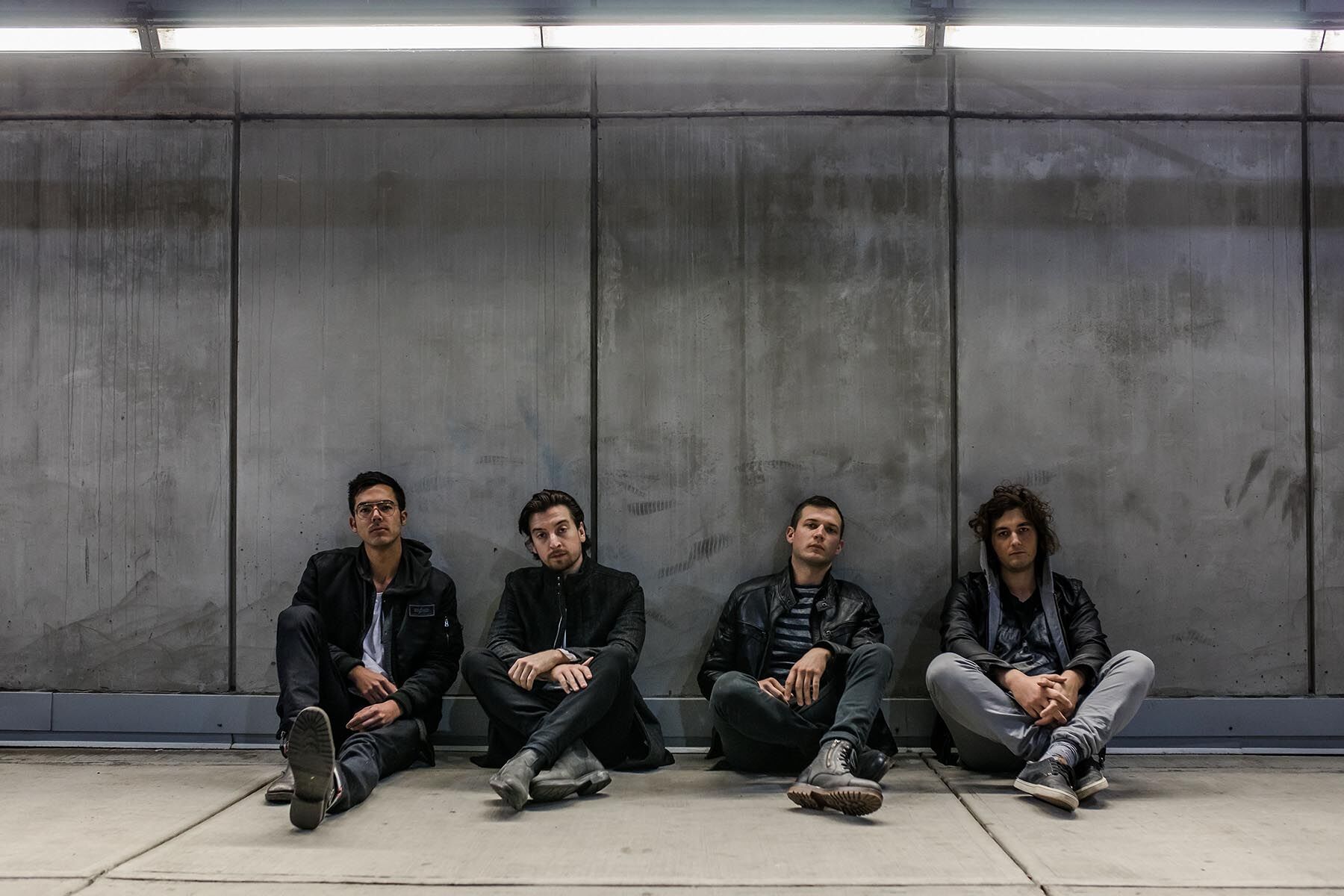 “Influenced by the organic sound and artistic freedoms of the alt-rock genre, CIVILIANA brings an unfiltered sound laced with raw emotion and primal physicality to their music and shows. CIVILIANA originated in Kelowna, British Columbia where aspiring drummer and vocalist Calen Trentini met future bassist Spencer Daley in a high school band class. They formed a duo before adding their friend Adam Wilson – a guitarist – into the mix until the trio went their separate ways after high school. After re-connecting as adults in Vancouver, CIVILIANA was born and the group recorded their first EP Out the Window in 2016 with former high school classmate Daniel Ponich producing. Daniel subsequently joined the band, providing guitar, key, and percussion elements that proved to be the group’s missing link. 2019 has ushered in the band’s new era with the release of three new singles from the award-winning producing team of Ryan Worsley and Matt Di Pomponio”.

We caught up with lead vocalist and drummer Calen Trentini to learn more about the band.

When did you know you wanted to be a musician?
Becoming a musician always felt very intentional for me and not something I stumbled upon. I remember being as young as 8 years old and obsessing over the Blink 182 albums, often times I would set up buckets and hit them with sticks as I pretended to be Travis Barker. It all came into fruition when I joined a music class in seventh grade and chose the drums as my focus. I haven’t looked back since!

Are you trained? How did you develop your skills?
I have been playing drums for about 15 years. In the beginning I took drum lessons which helped immensely, but playing in bands throughout high school and later on is really what accelerated my growth. There is a massive difference between playing to pre-recorded tracks with headphones on by yourself versus learning the complexities and nuances that come from playing alongside another musician.

Who are some of your biggest musical influences?
During my teen years, John Bonham became my influence for drums and I would diligently try – keyword being “try” – to learn what made him so special. He always played the right thing at the right time and had such a unique feel for the drums.

After Led Zeppelin, I gravitated toward modern rock and newer bands. I already felt like making music was something I wanted to do for the rest of my life, so hearing what the bands of today were up to felt very important. The bands that subsequently dominated my iPod were Death from Above 1979, Arctic Monkeys, Kasabian, Cage the Elephant they really contributed to the sound of CIVILIANA today.

How did the band come together?
Our bass player Spencer Daley and I were in the same music class in seventh grade. He chose to play the bass guitar and we quickly decided the next step was to make some music together.

Bass guitar and drums are an interesting and not often seen combo but we had seen one of our favourite bands called Death From Above do it, so we gave it a shot. Spencer found a way to really distort his bass to make it sound closer to a guitar and I figured out how to drum and sing.

This duo worked out for a couple years but we really wanted to find a guitar player to fill out our sound. We were introduced to a guitarist at a neighbouring high school named Adam Wilson and we instantly saw a fit. Adam had the ability to write full, creative and unique songs while Spencer and I provided the backbones through our rhythm and bass.

We played together as a group throughout high school and for a couple years after. Things slowed down as life and work got in the way but in 2015 we re-grouped, this time as adults, and formed CIVILIANA.

We recorded our first EP in 2016 with a high school friend Dan Ponich and afterwards, we ended up inviting Dan to be the fourth member of the band and add additional keys, guitar and percussion to our sound.

How would you describe your sound?
We combine the traditional and pure forms of alt-rock with an emotionally-charged electronic soundscape.

What’s your favourite tune in your repertoire and why?
Right now, my favourite song to play is also our newest single called “Void.” It shows off vocals from both Adam and I, harkens back to the bass/drums roots we were formed on, and features an explosion of sound and energy in the back half of the song which is a rush to play live.

What can audiences expect from one of your live shows?
Audiences can expect a high-energy performance. We put the drums at the front of the stage so they’re right up in the audience’s face. We also show off a dynamic side of our sound where we bring out more melodic and electronic rock-based music, while staying true to our alt-rock band roots.

Where can we find your music?
You can be the first to see and hear what’s next by following us on our socials @CIVILIANAMusic on Instagram, Facebook, and Twitter or visiting our website at civilianamusic.com!

You can also keep up with us on Spotify HERE.