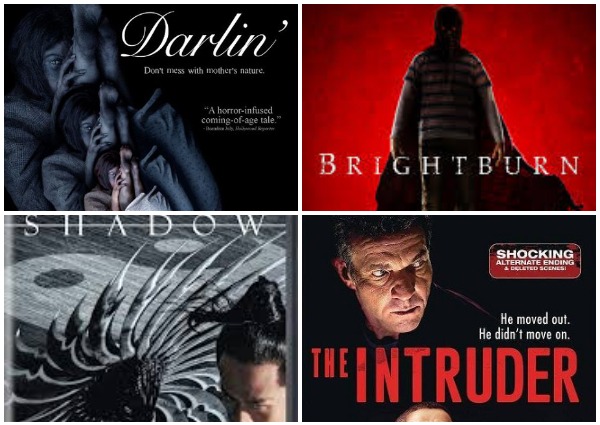 We don’t have enough titles to do our usual seasonal round-up but we thought as the summer comes to an end it’d be a good time for a small sampling of the latest movies available on home release to improve those physical media libraries you should all be building because relying on streaming services is honestly folly and you’ll regret it when you look around one day and your favourite titles are inaccessible. Ok, end of rant. Here are a few things you can add to your shelf this month:

Darlin’
Dark Sky Films
Available on DVD or Blu-ray, Sept 3
A sequel to 2011’s The Woman, this brutal horror flick amplifies the voice of star Pollyanna McIntosh in her writing/directing debut. It tells a dark cautionary coming-of-age story in a horrific religious setting that reflects some of our world’s most insidious and inescapable brutalities.
Special Features: Audio Commentary, Behind the Scenes, Deleted Scene, Trailer

Brightburn
Sony Pictures Home Entertainment
Available on 4K or Blu-ray/DVD/Digital Combo, Aug 20
This unique horror/sci-fi hybrid sports an excellent cast (Meredith Hagner for superstardom!) and a screenplay by James Gunn’s brother (Brian Gunn) and cousin (Mark Gunn) so naturally a producing credit from the man himself. The film is an interesting oddity but the special features are a real must-have for anyone interested in this team.
Special Features: Audio Commentary, Creating a New Supervillain, Hero Horror- a Radical New Genre, Quick Burns Vignette Social Series

Shadow
Well Go USA Entertainment
Available on DVD, Digital, or Blu-ray Combo, Aug 13
A new epic from major Chinese director Zhang Yimou, Shadow is a visual feast that you absolutely have to watch on Blu-ray if you missed it in theatres. The mesmerizing fight scenes and gorgeous compositions are unmissable.
Special Features: English Language, Making Of, Behind the Scenes, Trailers