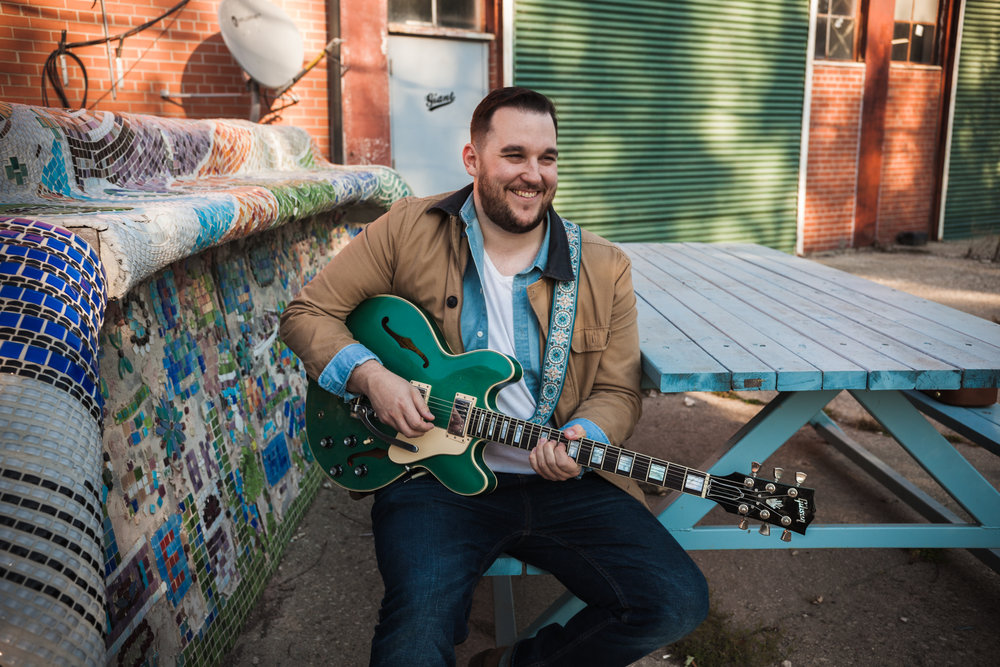 “Mike Riley is a songwriter living in West Toronto fond of big dogs and bigger guitars. He hasn’t let being born with a club foot in a small, shitty one store town or a divorce stop him from pursuing his passion for music. Early on, Riley picked up the guitar when all his friends were skateboarding. Music was his way into the crowd and like most teenage boys, girls were the motivator. If they couldn’t watch him kick flip at least he could learn their favourite song. Though he didn’t know it at the time, Riley was a natural songwriter and soon dropped the Dashboard Confessional covers and started writing and recording entire records in his high school bedroom. After high school, a few DIY tours and some mild Myspace fame – Riley moved to London (ON) for College. He packed up his little recording studio and set up shop above a Starbucks in the downtown core. Hundreds of songs were recorded in that apartment. After Graduating, Riley fell in love and settled down. He thought it was time to try and make it as a professional – got a job with the bank and considered starting a family. But the musical itch never left. Things went south with his marriage and Riley found solace in the one thing he always had, music. He picked up his guitar and wrote his way through the divorce – reinforcing his prolific nature and honest, almost therapeutic style of writing. Settling into a new phase of his life, Riley’s appetite for music has expanded into more folk, alt-country and renegade pop sensibilities. With painfully relatable lyrics and hooks catchier than ever, his music always focuses on telling a story.”

When did you know you wanted to be a musician?
I was born with a foot disability. I’m not in a wheelchair but my mobility is limited and I could never run or play sports. When I was 15 all of my friends got into skateboarding and I couldn’t follow. For my 16th birthday my dad bought me a guitar and an amp and suddenly I could learn to play punk songs and be part of the scene. I’ve never looked back since then.

Are you trained? How did you develop your skills?
I’m self taught, I used to buy guitar magazines and then call the music store to annoy them with questions about what it all meant. I’m usually working on developing something – there are a lot of really valuable online lessons these days and I’ve been catching up on formal theory that I missed in my younger days.

Who are some of your biggest musical influences?
The Killers are probably my favourite band – Brandon Flowers is an amazing singer and I love the stories he tells. Taylor Swift is one of my favourite songwriters and such an icon it’s hard not to be in awe. John Mayer is my favourite guitar player. Ruston Kelly made my favourite record last year and Kasey Musgraves is probably my favourite vocalist. I grew up on emo (Dashboard Confessional, Taking Back Sunday etc) and mainly listen to country these days.

How would you describe your sound?
Melancholy but hopefully not depressing. Catchy, personal and moody. It’s folk music with hints of country, roots and pop.

What’s your favourite tune in your repertoire and why?
“Drug Dealer” right now – it’s about growing up in the small town I’m from and dealing with the isolation that can bring.

What can audiences expect from one of your live shows?
I talk a lot, I like to tell stories and dig into what’s being the songs. I’ve got some really talented friends who play with me and I have a lot of fun with changing the presentation of the songs from one show to the next.

Where can we find your music?
Instagram @mikerileymusic, Spotify/Apple Music/YouTube at Mike Riley and mikerileymusic.ca