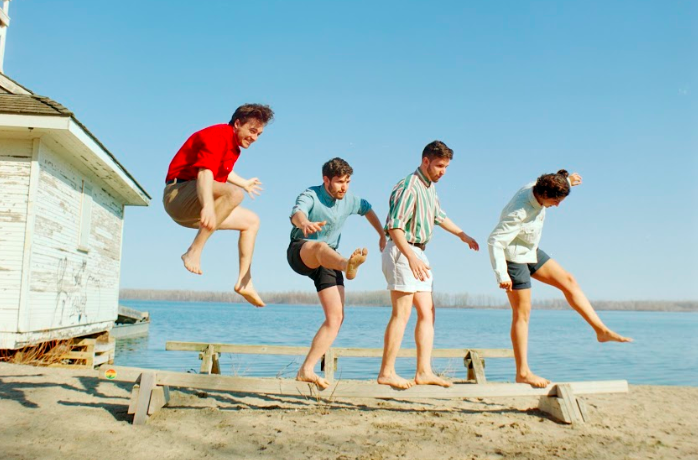 “Basset is a young and rising all-acoustic group, consisting of vocalist Yasmine Shelton, songwriter/musician Sam Clark, and twin brothers Aaron and Noah Philipp-Muller. While they draw on folk traditions from both sides of the pond with their heavy use of fiddle, mandolin and cello, their original tunes also take inspiration from old blues music (hear Shelton’s powerful vocals), 50s and 60s rock, and their shared classical background. Their inventive style has earned comparisons to The Punch Brothers, Belle and Sebastian, and Of Monsters and Men. They released their debut EP on June 28th 2019.”

When did you know you wanted to be a musician?
Music has always been a passion for us, so in a sense we’ve been musicians for as long as we can remember – for instance Sam picked up the violin at only five years old and just can’t remember or imagine a life without it.  We played together all through university, but it’s only been a year since we got out and really turned our main focus from academia to music.

We had never considered music a realistic career until we started meeting people who were out there doing it.  I think we always assumed that being a musician meant throwing everything you had into one project, and most people can’t make a living doing that, so we figured that would be a very difficult life.  What we’ve found is that musicians often make a living working on all kinds of projects, and all kinds of side jobs.  It certainly isn’t easy, but that realization – that this could be a feasible life even if you didn’t “make it” with a single project – that really opened the door for us to take the leap from academia into careers in music.

Are you trained? How did you develop your skills?
We were all originally trained on multiple instruments as classical musicians, with much of our musical experience coming in orchestras and choirs.  While this gave us a strong background in musical theory and technique, it took a lot of work to learn how to apply all that as a folk band.  Folk music works very differently from classical music, partly because the way you learn it is a lot less formal.  There certainly aren’t a whole lot of folk universities out there, and that can be confusing for someone who is used to a very structured education.

To develop these skills, we just had to go out and start playing the music!  We played and studied with folk musicians in all different styles from bluegrass to klezmer, incorporating new ideas into our music as we went.  Even now, we follow bands who make similar music to see how they use their instruments, and we treat each new song as an evolution in the style we’ve found ourselves playing.  For instance, our recent single “Waterloo” incorporates a simple version of an old time bowing technique that Sam picked up in a fiddle lesson not long ago.

Who are some of your biggest musical influences?
We look up to bands who take elements of traditional folk music and mix them to invent their own styles.  This includes groups like the Punch Brothers, I’m With Her, and Kittel and Co.  In terms of songwriting, Sam takes cues from the traditions set by writers like Bob Dylan and Leonard Cohen, especially more recent writers like Anaïs Mitchell and Josh Ritter, while Aaron’s writing is influenced by groups like Belle and Sebastien and The Kinks.  And of course, it would be hard to miss the soulful influence of Nina Simone in Yasmine’s powerful lead vocals.

How did the band come together?
When we met, all of us were Arts and Sciences students at the University of Toronto.  Aaron and Sam met as first year roommates and quickly got to be good friends, jamming and arguing about philosophy late into the night.  We frequented open mics around the university, and got our chance when we were overheard rehearsing on campus, along with Aaron’s twin brother Noah on the cello, and another friend on vocals.  We were offered a gig: two 45-minute sets of background music for a school event, with two months to prepare.

It might not seem like much, but this was a tall order for a bunch of classical musicians just getting into the band rhythm.  In need of a permanent lead vocalist, we turned to Yasmine, who Sam had seen sing a bewitching a capella rendition of Nina Simone’s “Feeling Good” at an open mic night.  He was thrilled when she agreed to join the group, we set to work.  After two months, two very shaky sets, and a whole lot of feedback, the band had begun to take shape.

How would you describe your sound?
We have a very raw acoustic sound, sometimes witty and poignant, and other times dark and driving.  Part of what sets it apart is our unusual and sparse instrumentation, which heavily features the fiddle, mandolin and cello to support Yasmine’s powerful lead vocals.  It seems to us like acoustic folk music is always changing, broadening its scope to incorporate more and more different styles, in some wildly inventive ways.  We are trying to create our own signature style that can find a place in all that.

What’s your favourite tune in your repertoire and why?
“Waterloo” is our favourite tune because it makes use of all our main strengths, including Yas’ powerful voice, our creative string arrangements, and our four part harmonies.  It is also one of the songs that challenged us the most, both in rehearsals and in studio, so a huge amount of work has gone into making it what it is now. Also, it’s not often a folk band gets to feel like a bunch of rockstars.  This song does that.

What can audiences expect from one of your live shows?
We tend to gather around a single microphone for our live shows, trying to make every stage feel as intimate as the living rooms where we rehearse.  We are a very close group, so our onstage presence is just an off-the-cuff extension of our usual quirky but approachable energy, and our performance clearly shows our love for each other and the music we play.  Our show is full of improvisation and often involves collaborations with whoever else is playing that night, making each show unique and unexpected.

Where can we find your music?
Spotify, Apple Music, SoundCloud.