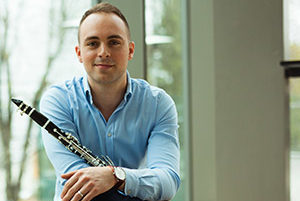 The Musician Spotlight Series shines a light on up-and-coming musicians creating heartfelt and original work across genres, giving them an opportunity to talk about their music, their collaborators, and why they do what they do.

For tickets to upcoming symphony performances featuring Miles, check out the TSO’s website.

When did you know you wanted to be a musician?
I was interest in music from an early age, however it wasn’t really until grade 10 when I had my first opportunity to play in an orchestra. That first experience, being surrounded by the sound and energy being produced from all of the musicians working together, it was incredible. From the very first notes… that was it for me, I was hooked. Those memories still remain with me and provide me with a fantastic source of inspiration.

What attracted you to your instrument? Do you play any others?
This question always makes me laugh because it gets asked a lot and my answer is not the tear-jerker story that people always want. When I was in grade seven, I was late to band class… it just happened to be the first day of school. In my defence it was my first year in a brand-new school and I had no clue where I was going. Once I finally found the band room, all of the saxophones that the school owned had already been taken by other students and the only options that were left were the clarinet and the bass clarinet. Not having any idea of what either of these instruments were, I compared the size of the cases – glanced over at the awkward looking, large case of the bass clarinet and chose the clarinet with confidence. My driveway was a mile long hike, uphill, (one way – ha!) from where the school bus dropped me off so, to me, this was a no brainer. And the rest, as they say, is history. I eventually learned to play the saxophone and I am actually proficient on the flute and piccolo as well. Ironically today, I’m the bass clarinetist of the Toronto Symphony Orchestra – how’s that for poetic justice!

Where did you train? Did you have a specific teacher or mentor who made a big impact on your music career?
Each clarinet teacher, from high school through graduate school, has had a tremendous impact on my career. However I have to credit my high school band director Mr Wilson as the one who had the biggest impact on my life as a musician. I have a bachelors of music degree from the Peabody Conservatory – Johns Hopkins University in Baltimore, US and a masters of music degree from The Mannes School of Music in NYC.

Tell us your TSO origin story- how did you get the gig? What was your first rehearsal like?
My first season with the TSO (2016-17) was actually a temporary position. At the end of the ’15-’16 season, two members of the TSO clarinet section suddenly left the orchestra to further their careers elsewhere. Since there wasn’t enough time between seasons to hold formal auditions, Peter Oundjian, the music director at the time, and the principal clarinet Joaquin Valdepeñas, called me while I was in Miami with the New World Symphony Orchestra. They asked if I would be interested in filling in for BOTH of the clarinet positions. It was later that season that a formal audition was scheduled for bass clarinet and I was fortunate enough to win.

What’s your favourite piece to play?
I love playing anything by Mahler. His music covers virtually every emotion under the sun. There are moments of true gut-wrenching sadness and then at the turn of a single harmony you are tossed into some of them most joyous, celebratory music ever written. It is always a very moving experience to sit within an orchestra and have his music come alive around you.

Who is your favourite fellow musician in the orchestra and why?
This is a really tough question to ask because I am friends with so many of the musicians in the orchestra and I have so much admiration for all of my colleagues. However, I can share this story about my very first rehearsal with the TSO…
My first time playing with the Orchestra I was very nervous because I was playing Eb Clarinet (a smaller clarinet that plays very high) for the first time in a professional setting, and I didn’t know anyone in the orchestra except the conductor and the principal clarinet. To say nerves were a factor would be an understatement because we were playing Shostakovich’s Eighth Symphony and there are a lot of very high Eb clarinet notes that play at the same time with the piccolo, which is very difficult to play in tune together. As soon as I sat down the piccolo player turned around and said “Hi, I’m Camille [Watts]…we’re going to be best friends this week” – what a way to start my time in Toronto! It was good to know that I was amongst some great people.

Do you have anything you’d like to add?
Whether people realize it or not, today, classical music is more exciting than ever before! Sure – we still battle all of the standard stereotypes like you have to take out a second mortgage to purchase a ticket to the symphony , or you have to own your own tux or string of pearls to be let in the doors, or you have to have to have studied at a top music institution to even begin to understand what the heck is happening on stage. The wonderful reality is, the Symphony is for everyone. The power of music is something incredible and one of the most beautiful parts of a concert is that you can have 2,000 people attend a concert and at the end have everyone take away an experience for exactly what they needed at that very moment.

So if you have been before, come back and see what new programs are taking place and if you’ve never been – take a chance, step out on a limb and check us out – because the world that awaits you is something that you can only experience for yourself.