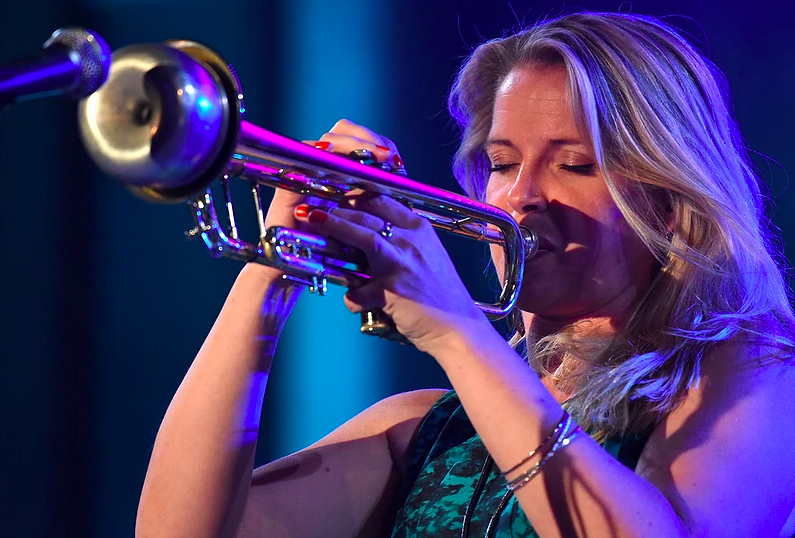 Bria Skonberg is bringing us the musical future by delving into its past.

It’s been a busy year for jazz trumpet player, composer, and singer Bria Skonberg. She got a last minute call earlier this year to play with the members of Sun Ra Arkestra backing up U2 at the legendary Apollo Theater in Harlem. She was approached by New York’s Lincoln Center to put together the Sisterhood of Swing, a tribute to the International Sweethearts of Rhythm, the first all female big band. Add a busy touring schedule and gigging with her band.

Bria’s been described as “the shining hope of hot jazz” by The NY Times, and wows audiences with her hot trumpet and vocals that are often described as smoky. Here 2016 debut album won a JUNO Award and she’s gotten more than 3.5 million plays on Spotify.

It’s been a long time since hot jazz has graced your average radio station – even those devoted to jazz. So, what turns a millennial onto that bouncy, upbeat style of jazz that was popularized by greats like Louis Armstrong nearly a century ago in the 1920s?

Oddly enough, while she now lives in New York City, the North American capital of jazz, Bria credits her childhood back in British Columbia for first exposing her to the music she’s building her career on. “I grew up in Chinchilla,” she says. As a member of the Chinchilla Middle School band, she got to play in local jazz festivals like the Chinchilla Dixieland Jazz Festival. “They were great about involving local schools,” she says. The kids got to play on stage, and then hang around to hear the pros play.

She went on to study music and graduated from the Capilano University in Vancouver with a degree in jazz trumpet performance in 2006. With a steady flow of performance with her own band and others, recordings, and performances in festivals all over the world, Bria now makes New York City her home.

Naturally, Louis Armstrong, another trumpet player, is a hero, and still, even modern jazz has long roots, as she points out. “Even when you consider what people call ‘modern jazz’ is 50 years old now.”

The music is gaining in popularity, and NYC’s growing Hot Jazz Festival is a case in point. As a co-founder, Bria left the admin work to others. “I brought the musicians,” she says. “There was already a growing group of people interested in this style of music.”

After a tour of the West Coast that swung back to the GTA for a show in Markham, and then back to NYC, Bria went straight to a residency at Syracuse University. Music education, and keeping her schedule open for residencies and clinics, is important to her.

Next up is a new recording of original music. “I’m printing the charts – tomorrow we go into rehearsals,” she says. The hew album will be largely original work that she wrote over this past summer. “I took a bit of time off the grid to process what I’ve been going through,” Bria says. The resulting music stayed faithful to her love of traditional jazz, but went back even farther to uncover its roots. “It’s pretty heavily rooted in the blues,” she says, “digging farther into jazz to the blues. It’s about finding light in the darkness.” It was her reaction to the zeitgeist. “I’ve been craving more humanity in these times,” she says.

Jazz emerged from the fertile musical soup that was brewing in the African American scene in New Orleans in the early 20th century, fueled by both blues and ragtime. Contemporary jazz can take many forms, including a strictly esoteric branch of art for art’s sake. Bria’s taking her version of jazz back to a time when it was street music. “There’s a lot of inspiring new ideas, but kind’ve institutionalized. Jazz is immigrant culture.”

Bria’s new album is projected to come out this spring. If you want to help it along, HERE’s The Link.