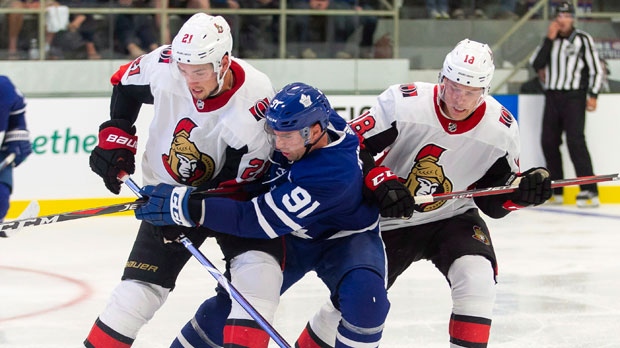 1. I woke up from a nightmare yesterday morning and was convinced that Willy was going to sign in the KHL at 15mil for 1 year. I haven’t been able to shake my anxiety and it’s starting to affect other aspects of my life.

His camp wants 8mil per season on a long-term (7-8 years?) deal. The UFA market is pretty set suggesting that Nylander should get between 6.2 and 6.5 million dollars per season. GM Kyle Dubas has said the he can’t be setting any new market place records.” The camps are clearly at an impasse and I find myself hating Nylander’s agent.

2. The Leafs beat the Sens last week 4-1 at the winner of Kraft Hockeyville’s annual contest, Lucan, Ontario. We got a look at the GTA line of Hyman-Tavares-Marner. Hyman was the same rabid puck-chaser with minimal finish that we’ve come to know and love. JT and Mitch lit up the Sens for 6 points and it was absolutely amazing to watch. Since July 1, I’ve watched every fan-made Tavares highlights video on Youtube and none of it prepared me for how dominant he is in all the little ways: getting to the dirty areas, hard on the puck, getting to the front of the net, and second chance efforts (he recovered a deflected pass and sent it to Marner in the slot for an absolute beauty goal). It was amazing.

Our defense still isn’t great but is it going to be enough? We were outshot 35-30 (outshot 17-10 in the 3rd period). Dermott and Holl had some great offensive looks and made a few solid breakout passes but both had defensive lapses. Ozhiganov was pretty boring to watch which is arguably idyllic for a defensive defenceman. Hainsey looked lost. I assume a lot of the mistakes can be attributed to rust but I really don’t think Hainsey fits in this lineup and I REALLY hope someone takes his place.

Battling backups Sparks and McElhinney both had solid games. I’d like to see Sparks as the backup because there isn’t anything more he can do with the Marlies. There’s a general concessus around the league that he’s not going to be a starter but he’s probably capable of handling 20-25 games this season, which would give Freddy a more manageable schedule than last year.

Of all the fringe players, Emerson Clark was by far the most impactful. He picked up a primary assist on Borgman’s game winning goal and was a pestering presence all night long.

3. In the words of Ottawa Senators owner Eugene Melnyk, the Sens are “in the dumpster” and I could not be more excited to be a total bastard, reinforcing every negative stereotype the rest of Canada has for Toronto Maple Leafs fans. I’ve got my tickets for the game on February 6th and I’m ready to go completely bonkers.

4. With legalized gambling becoming more and more prevalent in the NHL, are coaches going to have to report injuries differently? Will the added income from the betting industry encourage the league to report more than just “upper/lower body”?

5. Boston and Calgary are in China to play a couple exhibition games. Beyond Bettman’s mandate to build the game internationally, it’s a good way to test out the potential for the NHL to rejoin the Olympics.

Regardless, I hate the Bruins. Just so you know.