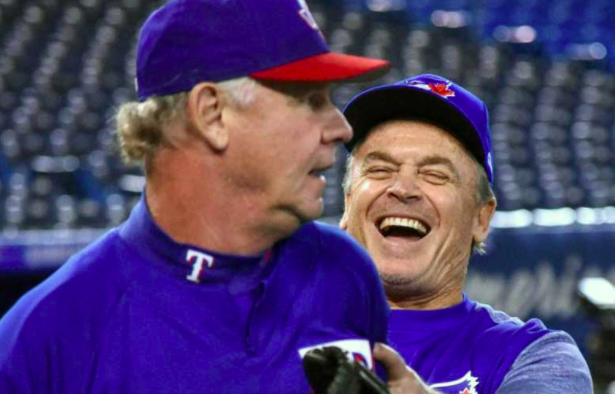 If you had been living in a yurt for the last month and just emerged, cold and stinky, coming over to my place to shower and watch tv, you might have eventually asked me “oh, yeah – how have the Blue Jays been doing so far?” I’d probably make the same face I make when you offer me some of the homemade kale chips you brought with you. Then I’d tell you that, as of right now, Randal Grichuk is ‘hitting’ .106, Devon Travis is at .148 and has been sent to Buffalo, Russell Martin is at .150, Kendrys Morales .170 and Aledmys Diaz is leading that group with a blistering .179 average. That Luke Maile was leading the team in hitting, Yangervis Solarte the leader in home runs, and Josh Donaldson had already missed more than half their games due to injury. That Marco Estrada had a 6.00 ERA and Marcus Stroman was winless with an ERA over 8. That they were 10th in the A.L. in OPS and were only getting a quality start from pitchers in 1 out of every 3 games, what would you think the Blue Jays’ record would be after 27 games? 9-18? 8-19? Hearing that laundry list of horrendous performances had all occurred concurrently in the first month of the season might make you wonder if they had tied the Baltimore Orioles’ historic 21 game losing streak to begin the 1988 season. You would have understandably assumed that things were worse than they were at the start of 2017, when the Jays found themselves 6-17 on April 28 and had ostensibly buried themselves in the hyper-competitive American League East.

Instead, despite that aforementioned statistical horror show, they have somehow managed to be three games over .500 as April comes to a close. A combination of a fairy easy schedule, several timely, bunched-up hits in the first few weeks and some unsustainably strong bullpen work has allowed Toronto to stay in the hunt at 15-12. It would be a fool’s errand to attempt to predict what May will bring. If the hits start to fall more frequently and the starting pitching improves- and it would be almost impossible for them not to – does that mean they will win more games? Or will they improve statistically but run out of good fortune at the same time, losing some games they deserved to win in a direct reversal of what has happened in April? Your guess is as good as mine. The one thing I can say without hesitation is that the 2018 Blue Jays team is a more interesting team to watch than last year’s, slowly morphing into a new identity. Intrigue is good. Intrigue is worth watching.

– In the first game of the Red Sox series, both teams’ starters showed how effectively pitchers can use the high strike as an effective countermeasure in the era of elevated launch angle. The last few years have seen many previously unremarkable MLB hitters (Scooter Gennett, Didi Gregorius and Yonder Alonso come to mind) try to emulate Josh Donaldson, dramatically altering their swing path in an attempt to create more backspin on the ball and do ‘more damage’.   While it did lead to many players hitting career highs in home runs last year, both Rick Porcello and J.A. Happ have realized that throwing pitches high in the strike zone is an effective way to neutralize the new neanderthals. When the nature of your new swing is predicated on keeping your head down and getting under the ball, high fastballs create a lot of swings and misses and harmless popups. Very few players are as gifted athletically as Donaldson and in most cases their newfound aggressiveness can be exploited for quick, harmless outs. More cerebral pitchers (like Happ and Porcello) can expose this new inefficiency with an almost clinical precision. On the other hand there is Marcus Stroman, more emotional than intellectual, who thus far is struggling to adjust. Stroman stubbornly lives only in the lower part of the strike zone. He may be in for some more painful outings like we’ve seen this April before he’s forced to make some changes to his approach.

– What is clear is that J.A. Happ (and not Stroman or Sanchez) is the team’s best starting pitcher right now. He is leading the American League in K/IP and has pitched very well in games where the bullpen really needed some length from him. The only problem with that is that he’s 35 and will be a free agent at the end of the season. Right now he is the most important player for the Blue Jays to attempt to re-sign.

– The Worst At-Bat of the Week Award was given out early and the winner was about as surprising as Gary Oldman winning this year’s Oscar. Tied 3-3 in the ninth inning vs. Boston on Monday night, Kendrys Morales was summoned from the suck house to pinch hit for Steve Pearce vs. RHP Joe Kelly. Morales ‘worked the count’ to 3-1 by not swinging at three consecutive curve balls in the dirt. Then, on the 3-1 pitch Kelly threw him a fourth consecutive curve – but this one was a cookie right in the heart of the strike zone, and yet Morales somehow still only managed a weak dribbler right into the shift. In a late inning, pinch-hitting appearance when your only marketable baseball skill is your hitting, the Blue Jays have a right to expect better from a guy who they’re paying $11 million this year. He can’t even decide if he needs to wear eye glasses or not. I have three letters to describe how the Blue Jays can improve the Kendrys Morales situation : D.F.A.

– Lourdes Gurriel Jr. scored the tying run in the fifth inning of Game Two vs. Boston in a way that the Blue Jays haven’t scored many of the last few years. He singled, then stole second (!) and then scored on a single to short left field by Pearce. Andrew Benintendi’s throw was strong and accurate but Gurriel simply outran the ball. If the Blue Jays are going to compete with more talented teams like Boston and Houston and New York, game-changing speed like Gurriel’s, which they haven’t had much of lately, could be an important way for them to try to steal games in which they are slightly overmatched.

– There is nothing more Blue Jays than the fact that on Wednesday they lost their first game of the season when scoring at least four runs and is happened on a night when Chris Sale started. Sale, the beanpole Boston starter and perennial Cy Young Award contender, was in trouble in the first inning but Toronto let him wiggle off the hook and it cost them later on. With the bases loaded and one out and Kevin Pillar swung at each of the three pitches he saw, all of which were well out of the strike zone. He managed to make contact with the third (and worst) pitch to muster a sacrifice fly, but it was a pyrrhic victory at best. Buck Martinez heralded the at-bat, somehow extolling Pillar’s ‘determination’, but I disagree vehemently. I thought it was a terrible at bat. Sale had already walked one batter and hit another with a pitch and was clearly struggling with his control. Instead of forcing Sale to come into the strike zone or extending his struggles with control, Pillar went up hacking like an extra with a machete in a movie about American troops in the Viet Nam war. I know everyone in Toronto seems to love Pillar because he made a few diving catches (and in spite of his homophobic slurs and generally shitty hitting), but I don’t believe there is anything he does better on either side of the ball than Anthony Alford would be capable of. I hope he enjoys his final season in Toronto. He is the least important player for the Blue Jays to attempt to re-sign.

– If things are going to improve for Marco Estrada, he is going to have to stop throwing only his fastball and change up. He has to mix it up more. He threw just five curve balls during the entire game on Thursday night and it came back to bite him. If everything he throws is straight, eventually guys are going to guess right and time him up, especially in the third time through the batting order. He has to be able to throw a ball that goes from a strike to a ball, changing planes as it travels. If that possibility is not in a hitters’ mind, his lack of fastball movement and pace will continue to burn him. If there are only two options for hitters to guess at, eventually they are going to guess correctly. Estrada’s margin for error is not big – he surrenders more fly balls than any other Jays starter – and if just one or two of those fly balls end up over the outfield fence (as they have been lately), he’s not a Major League pitcher anymore.

– The will be a challenging week for the local nine as they are scheduled to play 8 games in 7 days (a double header in Cleveland on Thursday to make up for the rain/snowouts a few weeks back on what would have been a day off). That likely means at least one Joe Biagini start (sigh). Perhaps he’ll stay with the team after that as the long reliever they so desperately need.

– I spent Saturday night at my kid’s local talent show and missed the game. It is debatable which event would have been more torturous to sit through . (Obviously, she was the best part of the whole affair…) Sunday afternoon I was stuck in traffic for three hours, thinking I’d be home in time to watch the game, but instead heard most of it on my car radio. I only saw the final few innings, so I my already limited powers of observation were severely hampered by my rather foul mood. One thing I did notice is how awful Texas’ lineup is right now (someone named Isiah Kiner-Falefa was their #3 hitter Sunday!!) and yet the Blue Jays managed to still lose 2 of 3 at home. That will probably haunt them down the road. How’s that for some insightful analysis?