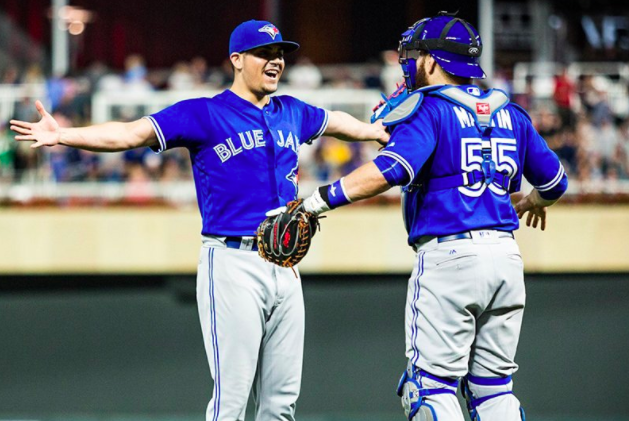 Last week it felt like every game the Jays were supposed to play was snowed out or rained out, so there wasn’t much to see or write about. So you get a double dose of know-it-all this week!!

They got fat on some bad teams, which is important to do when you face the Yankees and Red Sox 19 times every season and the imbalanced schedule allows other teams to beat up on the weaklings a lot more frequently. Against good teams (Cleveland and New York) the Blue Jays were 2-3, which probably gives us a good idea of where they are. They got away with a few mistakes against Baltimore and Texas, but played (wasted?) their best baseball so far this season in the Kansas City series, making two of those three games laughably non-competitive. Against the Royals, the Blue Jays looked more dynamic than they have in years, hitting balls the other way and against the shift and looking (dare we say it?) speedy on the basepaths. The additions of a few younger players have made this team more versatile and exciting. The Yankees series provided a sobering reminder, though, and perhaps the pressure of the matchup made young players press. Jays hitters were overswinging in key situations all weekend, with predictably frustrating results (7 for 41 with runners in scoring position). Despite managing to avoid their nemesis, Yankees pitcher Masahiro Tanaka in these four games, this weekend still marked a reversion to a team that only scores runs on home runs. The 2018 Blue Jays aren’t talented enough to win that way, especially with their two best hitters not producing.

The thing is, as younger talents like TeOscar Hernandez and Lourdes Gurriel Jr. arrive to the big leagues this team has to become a meritocracy. It is a ‘problem’ that deeper rosters encounter. With more talent, speed and versatility on his 25 man roster this year, John Gibbons has to be given the authority to play the players that are earning their playing time and his lineup decisions cannot be based on who is earning the most money. The Blue Jays now have a fairly deep roster, but it is not the most talented roster in their division and it is vital that it be maximized daily. If they believe they can compete this season, they need to play their optimal lineup, regardless of salary or experience or who they were traded for. Morales, Tulowitzki, Grichuk and Travis should have to earn their way into playing regularly (and right now none of them are doing so). Gibbons has more options in 2018 and he has to use them. This team cannot afford to hope that veterans who have struggled for an extended period will suddenly ‘figure it out’. Perhaps the threat of the bench or unemployment will motivate them. The Blue Jays genuinely have a roster that can make those things happen now.

A VIEW FROM THE CHEAP SEATS

– The Jays caught a break in the first game vs. the Orioles when J.A. Happ induced Adam Jones to hit a one-hopper to him with the bases loaded, but bounced his throw home. Russell Martin made a nice play to catch it but then threw the ball into Jones’ back as he ran towards first. Jones was called out retroactively for violating of one of the dumbest rules in the game. The base runner is supposed to run in the painted box beside the bag, meaning that it becomes next to impossible to touch the base with his left foot as he reaches it. The Orioles lost a run on the play and a chance to play for a big inning when all Jones was doing was running towards his target. Either the grass should be cut precisely so that it guides the base runner, or another bag should be placed directly beside first base in foul territory – one that only a baserunner can touch. That would avoid both collisions and confusions. (And, while we’re at it, can anyone explain why the bases have to be made of domed, hard plastic? I would have thought that after Bryce Harper wrecked his knee landing on a wet first base bag that MLB would finally have realized its folly and fixed it. Making the bags softer and easier for a flexed knee or foot to land on just seems like common sense and can’t be that difficult. I’ve seen a lot of footage from 50 years ago and it didn’t seem to be troubling any players back then.)

-Buck Showalter’s contract as Orioles manager is up after this season and I’m starting to think he wants a job with the Blue Jays next year. It appears he’s trying to win friends by using his bullpen as poorly as he can vs. Toronto in late situations with the game on the line. Bringing someone named Nestor Cortes into a 2-1 game in the ninth inning to face Curtis Granderson (who walked) and then leaving the rookie lefty in to face Josh Donaldson (who launched a grand slam) reminded me of watching nature films where a pack of hyenas surround a newborn zebra calf. (are young zebras called calfs?)

-Speaking of hard footage to watch, it is diplomatic and kind to say that Randall Grichuk has been a lost cause at the plate. His feeble, fumbling, four-pitch strikeout with the bases loaded and one out in the eighth inning of a one-run game on Friday was the single worst at-bat of any Jays player this season. They have a right to expect better than that in key situations. There is at least some cold comfort in knowing that he is a defensive asset in right field even when he’s struggling at the plate. It ain’t much, but its something. On the other hand, Devon Travis is officially a below average defensive second baseman and when he isn’t hitting, he hurts the team on both sides of the ball. In Aaron Sanchez’ start vs. the Yankees this weekend there were three or four times where Travis had the chance to make a big play and he whiffed on all of them. They weren’t errors per se, (two bloop hits he couldn’t get to, a double play not turned, etc.) but those plays not being made cost Sanchez runs and Toronto a close divisional game. The ‘nice kid making a comeback’ story is one Toronto seems to love, but with his slash line sitting at a putrid .140/.218/.160 and a decidedly mediocre defensive skill set, right now he is not a viable option on either side of the ball. Gurriel Jr (or the recently demoted Gift Ngeope) are better options at second base – at least for right now.

-The Blue Jays set an MLB record in 2017 by hitting just 5 tripes all season. They already have hit 3 in 2018. That’s kind of all you need to know about the lineup’s current makeup and why it’s better.

-If Kendrys Morales, who doesn’t play defence and is likely the slowest runner in MLB, wants to stay in the lineup, hitting the ball the other way against the shift like he did vs. the Yankees this weekend is what he’s going to have to do. If he continues to stubbornly hit the ball directly into defensive shifts, he is utterly without use and should be DFA’d. When he bats left-handed, second basemen can play in short right field because his lack of speed allows them to still throw him out at first. It is almost impossible for him to hit the ball into an open space. Hopefully seeing the other possibilities around him in the clubhouse now will force him to continue to adapt and improve his approach.

-Even without Josh Donaldson in the lineup, this team is drawing more walks and seeing way more pitches already this season. The additions of Curtis Granderson and Yangervis Solarte, along with better plate discipline from TeOscar Hernandez have made the lineup a much tougher gauntlet to run for lesser pitching staffs, and it allowed the Jays to see more pitches, wear out starting pitchers sooner and get into the soft bullpen underbellies of Chicago, Texas and K.C. early in each series. Nothing crushes an opposing pitching staff quicker than having to go deep into the bullpen in the early games of a three or four game series.

-Despite his diverse arsenal of pitches, hitters have figured Marcus Stroman out so far this season. While he deftly uses five different pitches and hesitation moves to help himself, especially vs. left-handers, Stroman does not possess a true put-away pitch, doesn’t have elite fastball velocity and doesn’t have a change up to put in hitters’ heads like Marco Estrada. His pitches vary and move well, but there isn’t a lot of range in speed and hitters know now that everything he throws is going to be down in the zone. If he can’t change their eye line by at least keeping them honest in the upper half of the strike zone, he’s going to have a very difficult time continuing to fool them. Hitting is a lot easier when you can just key in on one very small area and know everything that’s coming is coming there.

-On a similar theme, Blue Jays pitchers are going to have to pitch inside more if they’re going to handle the lineups of the Yankees and Red Sox successfully. Far too many times this weekend, Aaron Judge and Giancarlo Stanton were diving fearlessly over the outside part of the plate, able to stay on outside pitches and squeak them over the short right field porch. The only way to combat this is to pitch inside and make those behemoths mindful of it. Opposing hitters all look way too comfortable. I’m not talking about hitting anyone intentionally – just a pitch up and in every once in a while to keep them honest and move their feet. The American League’s best teams are too powerful to let them just stand in there and fearlessly take their best hacks like they’re at batting practice.