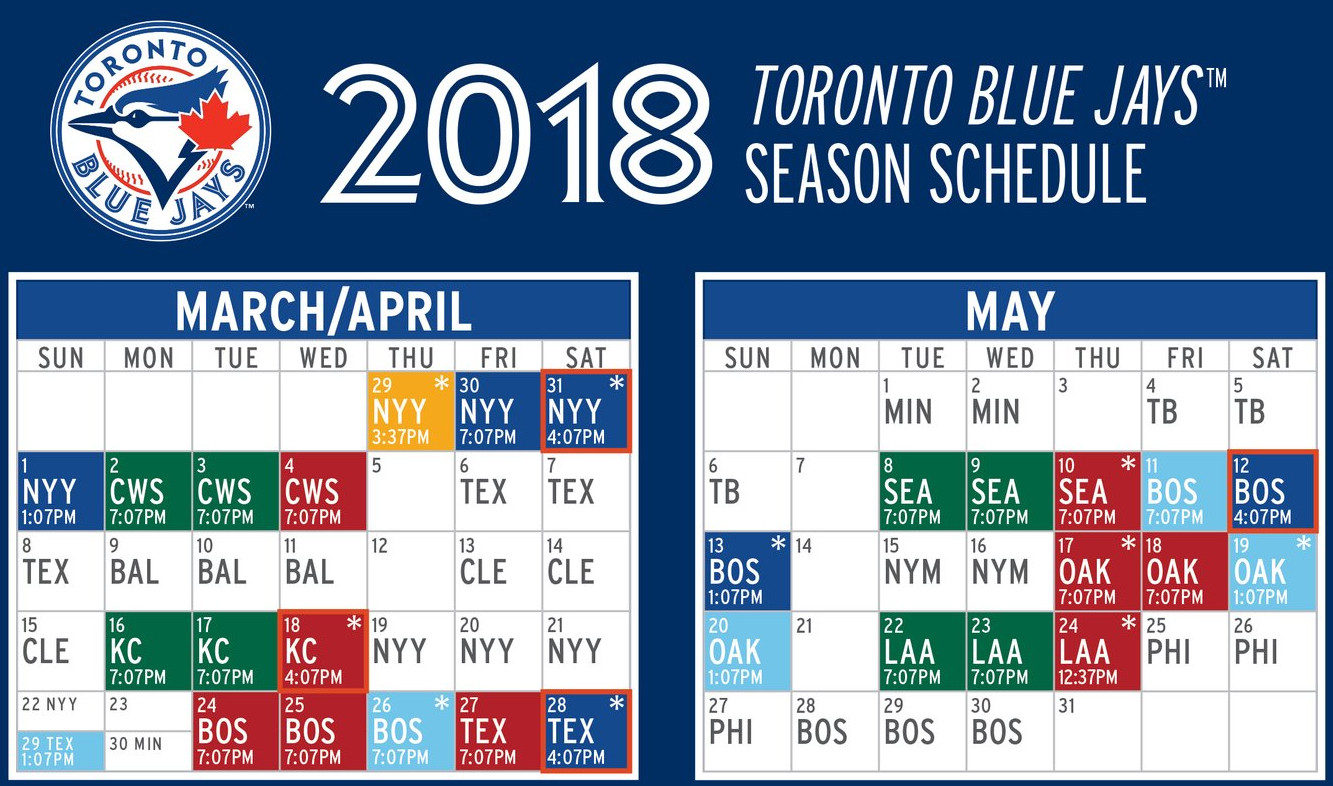 Since we won’t have Jerry Howarth around to say it anymore, allow me: Greetings, baseball fans and welcome to another season of Blue Jays baseball.

Even though Toronto’s home nine will undoubtedly be relegated to the back pages of Toronto’s sports section for the first few months this season as the Maple Leafs (one round, at least) and Raptors (dare we say four rounds??) wade their way through their respective leagues’ interminable playoﬀ seasons, the start of a fresh 162 game season is still worth noting. The Jays will likely only enter local sports fans’ consciousness once the other two squads have finished their playoﬀ marathon. Let’s hope that, come June, the Blue Jays are still in contention. The betting here says there’s about a 50/50 chance.

Last year, I attempted the herculean (sorry…wrong word…idiotic) feat of writing about every game the Blue Jays played. I suspected it would be challenging. I certainly didn’t think it would become the drudgery it eventually became to cover such a lifeless, slow, injury-plagued, dead-on-arrival team every single day. So, like many enterprises I’ve begun in my life, I quit halfway through. It was soul sucking, and it was making me dread watching baseball. In order to mitigate the chances of a repeat of last year’s fizzle-out (and because I’ve got a few gigs this year that will likely interrupt regularly scheduled baseball viewing), the corporate bigwigs over at the My Entertainment World compound have suggested writing less frequently. I’ve convinced myself that the suggestion was made to avoid burnout. It may well have been made because they don’t want to hear from me nearly as much. That is also about a 50/50 proposition.

Sooooo, while I’m all scrubbed up and full of Springtime optimism, and have at least temporarily forgotten last season’s disappointments, I thought I’d do a little season preview.

It is notable that I can find almost no American baseball writers or broadcasters who are predicting Toronto to be a playoﬀ team. It’s not hard to rationalize why. The Red Sox and Yankees have loaded up (again), with both AL East behemoths making major lineup additions in the oﬀseason while returning almost everyone from last year’s playoﬀ teams. The Jays did not land a marquee free agent and do not have any highly touted prospects joining their 76-win team from last year, so they’re not a very sexy postseason pick. Does this mean that everyone should just stay home, wait for the inevitable Josh Donaldson trade and just wait for the 2018-19 hockey season to start three weeks after the 2018 Stanley Cup finals? Not necessarily….

There are certainly things to be concerned about coming into this season, but after last year’s generally arduous campaign, let’s at least start the season thinking positively. I’m sure after a few weeks of watching, I’ll be able to come up with about 10 things I don’t like. So, for now…

1) GOOD HEALTH
It is not unreasonable to say that the Blue Jays were the A.L. team most ravaged by injury in 2017. In fact, it was true in terms of games lost to the Disabled List. To wit: Josh Donaldson, a top five position player in the league, missed 50 games and wasn’t right for another 50 that he did appear in. Aaron Sanchez, who won the 2016 AL ERA title, threw just 36 innings due to blister issues that lingered all year long. Devon Travis, a potential leadoﬀ hitter, appeared in just 50 games due to persistent knee discomfort, leading to another surgery. Closer Roberto Osuna battled anxiety (and inconsistency), Russell Martin hurt his knee falling in the sauna. Marco Estrada made 33 starts but apparently only slept the night before about 15 of them. Anthony Alford, the team’s best outfield prospect, was called up to help mitigate the injury damage, and promptly broke a bone in his hand in his fourth MLB game and missed the rest of the season. Steve Pearce, masher of left-handed pitching, missed a month just as he started putting a terrible April behind him. None of last year’s maladies appear to be issues going forward.

2) BAD HEALTH
Yes, in one case, bad health is a good thing. The only injury from last season that has lingered belongs to Troy Tulowitzki. This is not a negative development. Much respect to a great career highlighted by a legendary performance in the 2007 stretch run with Colorado, but the Toronto Blue Jays in 2018 and beyond are better when he’s not on the field. Even before he hurt his ankle and missed the final two months, Tulowitzki was the only MLB shortstop who was a liability on the basepaths, a lumbering presence who did not hit nearly enough to justify his lack of speed. His defence, once elite, had slipped into the dreaded “steady/unspectacular” territory. Again, this was before he tore up his ankle. I’ve done some research and apparently feet are pretty important for things like baserunning and quick-twitch, lateral defensive movements. Who knew? If he was slow last year (and he was), we might well be able to time his movements with a sun dial after this injury. We all appreciate that he will rehabilitate himself as earnestly as he can and try to work himself back to the big league team, and no one will confuse Aledmys Diaz with Ernie Banks, but the harsh truth is that no team can win with a slow-footed, below-average hitter (77 OPS+ last year.) and barely average fielder at shortstop. The position is just too important. At least to start this season, the Blue Jays don’t have to confront the reality of still owing him $54 million over the next three years and that is a plus.

3) THE FLOOR (AND THE CEILING)
Jose Bautista was an all-time great Blue Jay, but newly- acquired Randall Grichuk almost can’t help but be better in right field this year than Bautista was during his swan song season of 2017. Defensively, running the bases and at the plate, he is almost certain to be at least a modest upgrade, just as a Curtis Granderson/Steve Pearce platoon should be better than a Steve Pearce/Ezequiel Carrera/Chris Coghlan platoon (yuck). Similarly, Yangervis Solarte occupying just one roster spot and appearing in 90-110 games is a vast improvement over Ryan Goins and Darwin Barney taking up two roster spots and playing in over 125 games each. Yes, (It’s starting to become clearer why I stopped doing this in mid July last year, isn’t it?) Jaime Garcia is a more reliable fifth starter than last year’s highly flammable Joe Biagini/Francisco Liriano tag team, who combined for 31 starts, most of them terrible. Sexy or not, those moves do appear to have raised this team’s floor from what it was last year. Being purely speculative, we could suppose these modest upgrades to have had a 3- to-5 win collective improvement over 2017, which upgrades last year’s injury-ravaged team to around a .500 record. Combine that with better health from J.D., Travis, Osuna and Martin with some genuine, real-life prospects marinating in AAA, and you can see a winning record if you squint hard enough. That likely isn’t a team that can reach the playoﬀs in the 2018 American League East, though.

The ceiling for the 2018 Blue Jays will be raised or lowered by one young man’s (hopefully) blister-free finger. If Aaron Sanchez makes 30 to 33 healthy starts in 2018, replacing those made by such luminaries as Tom Koehler, Nick Tepesch, Mat Latos, Casey Lawrence, Mike Bolsinger, Chris Rowley, Cesar Valdez and Brett Anderson last year, the Blue Jays will be playing meaningful games in September. It’s somehow both hyperbolic and reductive to write that, but I can’t see any way around it. Even more than Josh Donaldson, Aaron Sanchez’s health is the single most important factor in determining which direction the Blue Jays head in for 2018. If he can’t take the ball on his regular turn, I expect there to be some veteran players whose contracts are expiring (Donaldson, Happ, Estrada) to be traded and somewhat of a reshaping of the major league roster to begin. Sanchez’s healthy right hand is the weapon that gives Toronto a puncher’s chance for 2018.