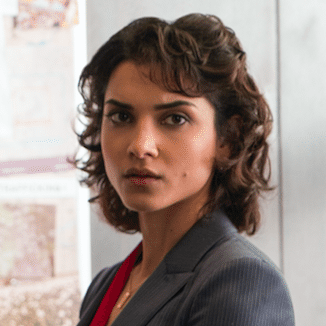 Netflix’s The Punisher has an amazing ensemble, but possibly the most intriguing castmember is Amber Rose Revah. First of all, she’s done everything from an LGBT cult film, I Can’t Think Straight, to House of Saddam to Indian Summers and more, more, more. Second, her style refuses to be nailed down. She’s played Mary Magdalene in the docu-series The Bible, all grit and robes, but she wears Mulberry London runway looks at premieres, and does photo-shoots in every color and style imaginable. She’s nominated this year for Outstanding Actress in a Drama for her role as Dinah Madani in The Punisher, where she breaks the mold of the gritty anti-hero drama as a blowtorch of idealism, moral character and passion. I love her for her withering stares in interrogation scenes, her processing of grief and trauma, and the layered family/work relationships Dinah’s character has to work through.

What made you want to start acting? Was there a specific performance or role that inspired you, that got you started?
In Eastern Europe, many of the arts were being oppressed during the war, so when my grandparents escaped Poland and settled in London they were so appreciative of the freedom of expression that the UK allowed.  My grandmother took me to lots of theatre as a kid. I was the only 7 year old watching Chekhov and Ibsen! I fell in love with the power of storytelling and its ability to cross cultures and unite people.

You attended Brunel University, whose alumni include people like Archie Panjabi, Sophie McShera, and Jo Brand. What stood out to you about Brunel when you were applying to it?
My mother sold our family home when I was 17 so I needed a place to live. I applied to University so I could get a student loan, which would cover my rent while I pursued a career in acting. Being at Brunel meant I could stay near London to take additional classes to learn my craft, as well as to audition for roles and also study my degree at the same time. I was also a member of the drama society where we would rehearse in the evenings and put on plays and musicals each term.

You’ve done so many roles, in so many different shows and movies – British, Indian, and American. Each has presented you in different styles, not just in terms of your clothing but in your characterizations. Do you have a character that you’ve played you feel you strongly identify with, whether in style or in dress? What defines your personal style, your personal mode of expression?
With each of the roles that I play, it’s a collaborative effort with the designer to create the character’s style. We discuss their background, personality, sensibilities etc. We take a lot of time during fittings to develop and create something unique for the character.

My personal style? I love timeless and demure chic: Gucci, Dior and Chanel, any day of the week! But I’m pretty sporty, so you’ll more likely catch me in trainers and a hoodie .

Let’s talk about The Punisher and your character Dinah Madani. So much of what the show deals with are intensely psychological issues, PTSD, therapy, etc. Have you ever worked with material like this? How do you create a bridge to this trauma and pain in your acting?
With each character I play, there is a process of creating and understanding why they act the way they do. For Dinah in The Punisher, I focused on 3 main areas: Firstly, research into the job of a Homeland officer. I was able to meet with 3 actual officers who gave me a superb insight into the job, and their understanding of the PTSD many officers will face. Secondly, her background as a second generation Iranian American. And, finally, breaking down step by step her desires and reactions through the journey she takes through the series.

Dinah is one of the best female characters Marvel has had to date. She’s confident, beyond capable, and gives the audience one of the most unique lenses into the world of The Punisher. What’s your favorite part about the way Dinah sees the world?
Thank you!! Steve Lightfoot (our Showrunner ) has created a truly great character. It makes my job of bringing her to life far easier. I think he sets a precedent with showing a capable female who is a real multi-faceted personality of her own. I love her independence and drive. I hope women who watch the show are inspired by her attitude.

Iranian-American actress Shohreh Aghdashloo plays the role of Dinah’s mother. What was it like working with her on set and off?
Shohreh and I worked together playing mother and daughter 10 years ago on HBO /BBC series House of Saddam, and she is playing my mum again now. She is a lot of fun. A beautiful energy and extremely talented actress who I’m always learning from.

We live in a world where representation is becoming increasingly important. There is a demand to see more people of varied backgrounds, ethnicities, body types and genders on screen and on stage. What does it mean to you to play a character like Dinah Madani in a Marvel series on Netflix?
Things certainly need to change with representation on screen. We need to start reflecting the world, not just a small portion of it. But I feel things are taking a big change now, and with writers like ours on Punisher I have hope that it’s coming soon rather than later.

What are you working on now/next?
We have hit the ground running with Punisher season 2 which has some really exciting things in store… no spoilers! In between the busy schedule, I’m working on producing a 4-part drama written by the fantastic Tony Basgallop.

Do you have anything you’d like to add?
Just a big thank you for this nomination, such a pleasure to be amongst such talents!