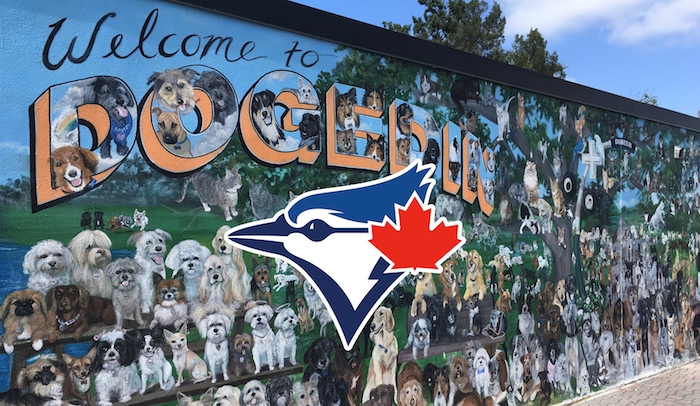 This year I decided to do something I’ve always wanted to do- I’m at Blue Jays Spring Training in Dunedin, Florida. Right now, I’m here at this very minute.

I’m here on my own and things have already gone very wrong, but I’m here, I actually did it, and tomorrow I’ll get to see the Jays play the Yankees from the second row of section 203 on the first base line. The next day, I’ll watch the Phillies from 107, row three, just to the left of home plate.

Raised by a baseball nerd father who’s the kind of alpha male who would get angry that I just called him a nerd but is too fanatical about statistics and rule minutiae to be called anything else, I’ve been around baseball my entire life. I remember driving three hours with my big brother’s little league team to watch Robbie Alomar play in the Blue Jays heyday. But girls didn’t play baseball in my dumb little town, they played soccer. I didn’t have the stamina for soccer, so now I’m an “arts person”. And arts people, specifically arts women, get skeptical looks when we talk about sports.

But I still love baseball. Or, perhaps more accurately, I love baseball again. When my family finally moved to Toronto in 2002 and games were something we could do without making a whole weekend of it, I had the privilege of rooting for a broken underdog team led by legendary slugger Carlos Delgado and a stoic 6’6 hunk named Roy, then only 25 years old but already an all-star pitcher. *pause for a few minutes of uninterrupted weeping*

It sounds passive aggressive, but it really was a privilege to come into my own as a baseball fan with a team that could generously be called imperfect. We finished two games above .500 that year and it would be another 13 summers before we saw the post-season. But my entire baseball philosophy is rooted in learning to love a losing team (well, a third or fourth place team; I’ll admit that fifth still gets me down). I love my team and their Bad News Bears-ish ability to load the bases with nobody out and leave three men stranded to end the inning without a run (a phenomenon Blue Jays fans have come to know as “Tuesday”). They don’t always win, so it means more when they do.

I’m not one of those people who loves the high-stakes atmosphere of the post-season and the energy of a packed stadium; my introvert self is happiest up in the nearly empty 500 section of a September game, watching baseball surrounded exclusively by people who love to watch baseball, whether we’re in a pennant race or not. Give me a game free of the fair weather crowds in their brand new Bautista jerseys looking to fill the time until hockey season starts. Give me the bottom of the ninth, the last game of the year, we’re down 3-1 with two men on and two men out and it doesn’t mean a thing because the Sox and the Rays already snatched both wild card spots, but Donaldson’s up and the sun’s beaming down and the crack of the bat sounds just as pretty as it did on October 14 2015, at least to me.

I was at that game- the 2015 ALDS Game 5, otherwise known as the “bat flip game”. My best friend bought outrageously expensive tickets on StubHub, way up in the corner by the jumbotron. Though I do love the lifetime supply of “I was there” bragging rights, and the post-game celebration on the field was pure joy to witness, the experience was altogether not my favourite. What didn’t come through on the telecast of that game was the tension in the stadium, the palpable mass anger that followed the top of the seventh, the ferocity with which beer cans rained onto the field, thrown by our own team’s supposed fans who seemed largely unconcerned that those were our guys on the field (not to say that human decency and basic sportsmanship would support throwing beer cans at the opposing team, I just think it should be pointed out Those Were Our Guys You Were Aiming At!). My best friend lives and breathes baseball, he hates to miss a second of play, but there were multiple points during that game when we almost left, literally afraid a riot might break out.

That’s the kind of baseball fan I am- pretty calm, self-preservational, unlikely to get worked up over a game that’s statistically more significant than another. I’m drawn to baseball because the ridiculous number of games each season makes space for a certain amount of level-headedness. Success in the MLB involves a lot of failure (even the greats only hit .300 in a good year) and no matter how big you win on Tuesday, you still have to go out there on Wednesday and start again. It’s an attitude pretty consistently reflected in my favourite players. I like the journeymen, the unflashy good sports who take extra batting practice and always run out the ball even if they know they’ll be called out. I loved Johnny Mac and Ryan Goins, because I’m a sucker for versatile team players with no claim to stardom for themselves, and I love good defence (totally unrelated note: this is also why my favourite member of a band is almost always the bassist).

My all-time favourite player is Aaron Hill, a pick that “baseball people” always laugh at but I unrelentingly stand by. His call-up in 2005 directly coincided with the moment I really fell hard for baseball; it may have been causal. He’s steadfast and surefooted and never shows off, even when he hit 36 home runs and made the all-star team after spending almost an entire season on the DL with a major concussion. If he’s on the field, he’s in ready position; I just find that endearing.

Of course now I’ve probably lost a few folks. Some of you read the word “endearing” and went straight to a place of “she likes him ’cause he’s cute” or “that doesn’t make him a good ballplayer”. First of all, no one gave you the authority to determine the criteria for “good ballplayers” so you leave Aaron Hill alone. Secondly, Aaron Hill is not actually all that cute. And thirdly, but by far most importantly, Stop Saying That Shit To Female Fans! It’s not just sports, it happens all the time (upon hearing that Draco is my favourite Harry Potter character, my aunt once exclaimed “but he’s not that cute!” as if anyone would ever like Draco Malfoy because he’s cute; apologies to Tom Felton) but the consistent discrediting of female fandom irritates me to no end. It’s true that I don’t have the same criteria for picking a favourite as my dad or my best friend or even my brother (I don’t actually know who my brother’s favourite player is but let the record show that he’s far more likely than I am to pick a favourite based on the stylishness of his haircut). I prefer the narrative intrigue and philosophical themes that play into baseball over the statistics and history that most fans go on about.

That came up a bit when I started to tell people I was planning to come to Spring Training this year. Immediately I started to hear a lot of “you’re going to get a close-up look at Donaldson” or, from the more annoying know-it-alls, “you know the stars are only going to play an inning or two”. Yeah, got it, thanks. I’m not easily starstruck and, living in Toronto, I get to see the A-list guys play all the time. I don’t consider them more important or more interesting because they put up crazy numbers. I want to see the start-ups, the hungry guys, the overlooked minor leaguers with something to prove, the kids who just got drafted and won’t make it to the show for years, if ever. I would have liked, out of sheer curiosity, to see Russell Wilson play with the Yankees but the the NFL star claims he’s just here to work out and won’t be risking injury by playing any actual games (but, seriously, how interesting would it be to see a superstar play a game at which he’s not a superstar!).

I wanted to come to Spring Training for tons of reasons. I’ve always wanted to come to Spring Training. And I’m here this year because I finally just decided to come. I got tired of waiting for the right time or the right person to come with or some sort of unattainable approval that I was a “big enough fan” to come to Spring Training. I’m an arts person- small town soccer and an elementary school that refused to let me on the basketball team even though I was a foot taller than the other girls saw to that- and I’ll never know as much about baseball as I do about Shakespeare. But that doesn’t mean I can’t also be a baseball person. I’m here. And I’m so excited to be here, even though my carefully chosen B&B lost my reservation and left me stranded on their porch at midnight and I had to be saved by a wonderful uber driver named Ainsworth and now I’m stuck at a dreadful motel called the Knights Inn that is straight out of The Florida Project (Florida in general, of course, being the absolute worst place). So far it’s gone terribly, and maybe tomorrow I’ll go to the game and feel totally out of place with all the intense sports fans who live and die by playoff hopes and can list every 40-man roster dating back decades and think Aaron Hill is a silly choice for a favourite player. But I think it’ll be great, because the only reason to not come to Spring Training is not wanting to come to Spring Training. So I came to Spring Training. I’ll let you know how it goes.

Stay tuned for Parts I & II of my Spring Training Diaries