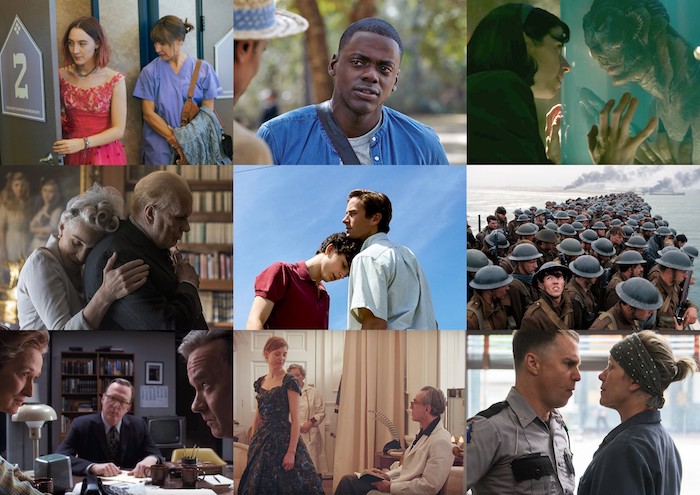 Oscar Watch: The State of the 2018 Best Picture Race

We’re less than a month away from the 90th Academy Awards ceremony and, somewhat surprisingly, the race is just about anybody’s game. Well, not anybody. There are a select number of proper contenders and a few films that need to practice their “It was an honor just to be nominated!” reactions. But unlike in years past, a true frontrunner is yet to emerge. Below I break down the current state of the Best Picture race.

Call Me By Your Name

Director: Luca Guadagnino
Starring: Timothee Chalamet, Armie Hammer, Michael Stuhlbarg, Esther Garrel, Amira Casar
Oscar Nominations: 4
Domestic Box Office Gross: $12,940,908
Coming out of Sundance last January with glowing reviews and an almost unanimous roar championing Michael Stuhlbarg as the Best Supporting Actor to beat in 2018, Call Me By Your Name seemed to be the heir apparent to Moonlight. While it has picked up a select number of critics awards and is likely to take home Best Adapted Screenplay, a Best Picture win for the same-sex romance seems like a long shot. More likely is a surprise win for Timothee Chalamet, who would dethrone Adrien Brody as the youngest Best Actor winner in Academy history.
Chance of Winning: 5%

Director: Joe Wright
Starring: Gary Oldman, Kristin Scott Thomas, Ben Mendelsohn, Lily James, Ronald Pickup
Oscar Nominations: 6
Domestic Box Office Gross: $48,845,157
The Academy can’t resist a historical drama, and this year we have two Best Picture nominees centered on the British experience during World War II. Darkest Hour is almost sure to win Gary Oldman the Best Actor trophy, but that may be all the film takes home. Being shut out of the Producers and Directors Guild nominations all together doesn’t bode well for momentum, no matter how loudly Oldman projects his bombastic voice to the rafters.
Chance of Winning: 4%

Director: Christopher Nolan
Starring: Fionn Whitehead, Mark Rylance, Tom Hardy, Cillian Murphy, Kenneth Branagh
Oscar Nominations: 8
Domestic Box Office Gross: $188,045,546
When Dunkirk opened back in July, many pundits hailed the World War II epic as an early award season frontrunner. And they weren’t wrong. The Academy gave Nolan his first Best Director nomination, and it’s not hard to imagine the film winning in some of (if not all) the technical categories. A Best Picture win, however, may be slightly out of reach. Only twice in the last 18 years has a film claimed a Best Picture win without a single acting nomination. Those films were Slumdog Millionaire and The Lord of the Rings: Return of the King, which were both considered unchallenged frontrunners going into Oscar night. Dunkirk, while certainly celebrated, isn’t working with that kind of energy.
Chance of Winning: 10%

Director: Jordan Peele
Starring: Daniel Kaluuya, Allison Williams, Catherine Keener, Bradley Whitford, LilRey Howery
Oscar Nominations: 4
Domestic Box Office Gross: $175,985,850
Upon its debut last February, Get Out quickly became both a box office smash (grossing more than $254 million worldwide on a $4.5 million budget) and a critical darling. While strong box office is hardly ever a solid bellwether for a Best Picture win, it’s hard not to see the parallels with 1992 Best Picture winner The Silence of the Lambs. February release. Box office hit. Critically lauded horror masterpiece. Not to mention that, in our current political climate, a movie that centers on the black experience in America is about as topical as you get. If you like putting your money on something unexpected but plausible, Get Out is the dark horse to bet on.
Chance of Winning: 15%

Director: Greta Gerwig
Starring: Saoirse Ronan, Laurie Metcalf, Tracy Letts, Lucas Hedges, Timothee Chalamet
Oscar Nominations: 5
Domestic Box Office Gross: $43,733,193
One of the indie breakouts of the year and the only 2018 Best Picture nominee directed by a woman, Lady Bird has enjoyed a somewhat serene trajectory throughout awards season. Taking home the Golden Globes for Best Motion Picture- Musical or Comedy and Best Performance by an Actress in a Motion Picture- Musical or Comedy only helped to increase its visibility. Lady Bird also had a strong showing at the Screen Actors, Producers, and Directors Guild Awards. But it didn’t manage to take home a single trophy at any of those ceremonies, which doesn’t bode well for its chances at the Oscars.
Chance of Winning: 10%

Director: Paul Thomas Anderson
Starring: Daniel Day-Lewis, Vicky Krieps, Lesley Manville
Oscar Nominations: 6
Domestic Box Office Gross: $14,174,109
A latecomer to the Oscar race with a limited release right at the end of 2017, Phantom Thread swooped in rather suddenly and stole a few Oscar nominations away from some early frontrunners. Given Paul Thomas Anderson and Daniel Day-Lewis’s Academy track record, this is hardly a surprise. But as we see with many late December releases, the momentum doesn’t seem to have amped up enough, and Oscar gold may be off the table for the historical fashion drama/romance. Given that Day-Lewis isn’t considered a lock to win for his reported final performance is a red flag, so look for Phantom Thread to be shut out of the above-the-fold categories.
Chances of Winning: 5%

Director: Steven Spielberg
Starring: Meryl Streep, Tom Hanks, Sarah Paulson, Bob Odenkirk, Carrie Coon
Oscar Nominations: 2
Domestic Box Office Gross: $67,184,510
Rushed into production at the beginning of 2017, this timely drama that explores threats to the freedom of the press comes in second, right behind Get Out, in a race for timeliness. Reviews were solid, with many critics saying the film was the best work given by Streep, Hanks, and Spielberg in years. Unfortunately, these factors didn’t translate into numerous nominations. With just nods for Streep and the film itself, The Post should just be happy to have gotten invited to the ceremony.
Chances of Winning: 2%

The Shape of Water

Director: Guillermo del Toro
Starring: Sally Hawkins, Doug Jones, Richard Jenkins, Octavia Spencer, Michael Shannon
Oscar Nominations: 13
Domestic Box Office Gross: $44,580,050
Of the nine nominees for Best Picture this year, The Shape of Water seems to be the one that played its cards right. With a healthy domestic gross (on a $20 million budget), a return to form for a lauded director, and the most nominations of any film this year, this is my bet for the 2018 Best Picture winner. Despite residing in a genre that isn’t always awarded by the Academy, the film has now won both the Directors and Producers Guild Awards. Sure, it’s the movie where Sally Hawkins has sex with a fish, but you can’t deny that The Shape of Water is a true testament to the power of cinema.
Chances of Winning: 30%

Director: Martin McDonagh
Starring: Frances McDormand, Woody Harrelson, Sam Rockwell, Abbie Cornish, Lucas Hedges
Oscar Nominations: 7
Domestic Box Office Gross: $41,814,051
Every year there’s an award frontrunner that starts out strong and fizzles out by Oscar night. Call it the La La Land Effect. This year, that movie is Three Billboards Outside Ebbing, Missouri. It took home the People’s Choice Award at the Toronto Film Festival back in September; a feat also achieved by eventual Best Picture winners Chariots of Fire, American Beauty, Slumdog Millionaire, The King’s Speech, and 12 Years a Slave. But don’t expect the film to join those ranks as it has faced its share of backlash focused on how director/writer Martin McDonagh’s screenplay tackles race in Midwestern America. Also not boding well for the film is McDonagh being shut out of the Best Director category. The last Best Picture winner not to receive a nomination for Best Director was Argo and, before that, Driving Miss Daisy in 1990. Three Billboards Outside Ebbing, Missouri is almost certainly going to clean up in half of the acting categories, and a Best Picture win wouldn’t be a complete shock. But the odds are piling up against it.
Chances of Winning: 19%