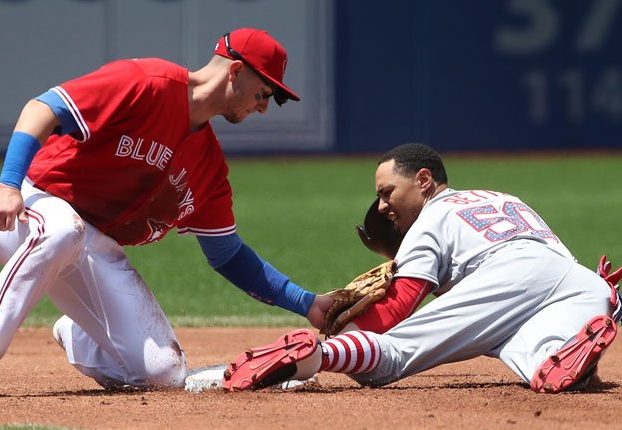 Artificial Turf Blues Game 81: The End of the Biagini Era

Well, I believe we’ve reached the end of the Joe Biagini era as far as his being a member of the Blue Jays’ starting rotation goes. Aaron Sanchez will rejoin the team next week, provided that he doesn’t prefer playing for Buffalo (who could blame him?) which will likely push Biagini back to the bullpen or even all the way to Buffalo, where he could become a part of the Bisons’ rotation, with next season in mind. I’m not sure he’s cut out for starting, though. Lacking a true strikeout pitch and nibbling too much is a bad combination – one that leads to high pitch counts and unnecessarily extended innings and taxed bullpens. As a reliever he seems to take a more direct approach, thinking less and going directly after guys with a lot of success for the inning or two he’s in for. He COULDA used a lot more of the direct approach today. Despite getting ahead of most hitters, he couldn’t finish many of them off because he was trying to trick Boston hitters and they wouldn’t chase. Biagini doesn’t seem to trust his stuff enough as a starter and good hitters don’t get tricked often. The Red Sox waited patiently for the trickery to cease, forced him come back into the strike zone and then punished him.

This whole series has felt like these teams were using two different sets of equipment and rules – as though the Red Sox were using a sleek, wireless hi-speed internet signal and the Blue Jays keep waiting for that annoying dial-up internet sound to let them know their AOL signal had finally started kicking in. Boston’s fourth inning was a perfect distillation of that dichotomy – Tzu-Wei Lin (who?) and Deven Marrero (double who?) led off the inning with perfectly placed bunt singles. A clearly rattled Biagini then fell behind Mookie Betts 2-0 before pouring a fastball right down the middle that Betts walloped for a three run home run, ostensibly ending the game right there. For years I have lamented the Blue Jays’ lesser hitters’ inability to bunt or hit the other way effectively, choosing instead to swing as hard and as recklessly as though they were as gifted as Josh Donaldson. Tonight the two Boston players who WOULDA been on the bench most nights executed all the little things well, extending innings and allowing their big stars to feast on poor Glenn Sparkman and Joe Biagini, who were using butter knives in a gun fight.

On the other hand, the third inning perfectly brought to light how bad the Blue Jays’ offensive approach is. Trailing by just one run at the time (seems impossible to remember, but it was real, I swear), Darwin Barney reached second base to lead off the inning after Boston left fielder Andrew Benintendi dropped a ball he SHOULDA caught. When an opposing team allows your #9 hitter to get to scoring position to start an inning, it should be a door that is waiting to be kicked in. Your first, second and third hitters will all now have an opportunity to drive in the game-tying run, the opposing pitcher will have to spend the entire inning throwing from the stretch and the opportunities are ripe for a big inning. You know the final score, so you know Toronto did nothing to take advantage. Jose Bautista walked, Russell Martin hit a lazy fly ball to right field that wasn’t even deep enough to advance a runner and Josh Donaldson saw one pitch before grounding into an inning-ending double play. You couldn’t script a more perfect example of the inept futility of the 2017 Blue Jays season if you had tried.

All we keep hearing about is how opposing teams are keeping Kendrys Morales off-kilter by continuing to throw him breaking pitches to get him out – that he’s a dead red fastball hitter whose struggles will end when he gets himself into better fastball counts. Well today he worked the count a little bit, got himself into fastball counts against Red Sox starter Drew Pomeranz and missed every one of them, despite them being thrown straight down the barrel between 91 and 93 MPH. Ross Atkins and Mark Shapiro can rightly blame Alex Anthopolous for the Tulowitzki and Martin contracts and the lack of upper tier prospects, but giving three years and pretty big money to such a one-dimensional player whose single dimension is on a steep decline is on them.

Jose Bautista has played pretty well in right field this season. His arm looks pretty good and while there have been a few hits that a younger player might have caught that he couldn’t get to, generally he has done good work out there. I don’t have any particular comment beyond that, I just thought it might be nice to read a sentence today that is not entirely full of despair or disdain.

Today’s drubbing marks the official halfway point of the MLB season and the unofficial end of the Blue Jays’ season and I need a break. I’m dried out. I don’t have any more insight to lend right now – there are only so many different ways to attempt to articulate that a team’s offensive philosophy is not working without starting to feel like a macaw with OCD – so I’m going to take a little break after today. My last few entries have felt terse and somewhat by rote. The weather is starting to improve (I think…) and this go-nowhere team is making me resent spending so much time inside staring at a television. I think we all need to take a break, get some sunshine. I’ll have a look in after the All-Star Game and see if there’s more to say then. Until then, thanks for reading this little experiment of mine. I hope to return rejuvenated, even though right now that doesn’t seem conceivable. I hope to see you then.