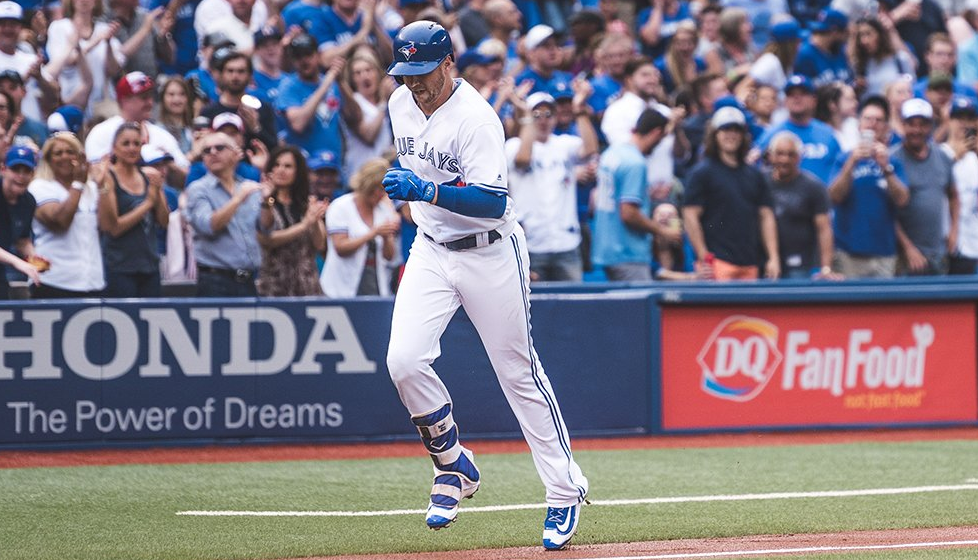 Artificial Turf Blues Game 79: The One That Got Away

Before discussing the depressing inevitability of tonight’s game’s outcome, we’ll focus on the pleasant improbability of late round draft picks who went on to become MLB stars. The top two draft pick steals in Toronto Blue Jays history:

2. DAVE STIEB – 5th round, 1978 (106th overall) – The best pitcher in Blue Jays history was selected as an outfielder. Kinda seems about perfect for this team, doesn’t it? After playing as an outfielder throughout his college career at Southern Illinois University, Stieb showed enough promise on the mound in a brief showcase to convince Blue Jays scouts that that was where his future was. His limited promise as an outfielder probably is the reason he fell to the fifth round, but much credit should be given to scouts Bobby Mattick and Al LaMacchia for having the foresight to see his potential. They turned out to be more than right and Stieb turned out better than they could have possibly hoped for, teaching himself to throw the best slider of his era and a very effective ‘dead fish’ curveball to serve as another weapon later in his career. He was a fiery competitor, the Jays’ first ace and the face of the team in the early 80’s, at one point becoming one of the game’s highest paid players. Draft steals don’t come much better than that.

1. JEFF KENT -20th round, 1989 (523rd overall) I don’t have the data handy, but I suspect that after Mike Piazza, Jeff Kent might be the latest-drafted player with genuine Hall of Fame credentials in MLB history. Though he only played 65 games for the Blue Jays – he was traded with Ryan Thompson to the Mets in August 1992 in exchange for David Cone as the Jays made a run toward that year’s World Series – he went on to hit more home runs than any second baseman in MLB history after that (366). He was named the National League MVP in 2000 and was a 5 time All-Star. Though generally loathed by his teammates – not many guys that productive are allowed to go to free agency three different times, and fellow players even took Barry Bonds’ side when the two nearly came to blows in the Giants’ dugout. Barry Bonds!! Even if he had been the nicest guy on earth, a 21 year old who played college baseball at the University of California but still wasn’t selected until the 20th round of his senior year is not exactly a hot prospect. It’s possible the Jays saw something other teams did not, but more likely that he figured some things out, Jose Bautista-style, in his late 20’s when he started playing alongside Bonds in San Fran. Whatever he figured out worked. Even though the acquisition of David Cone was a key factor in the Jays’ first World Series win and Robbie Alomar was a pretty capable second baseman at the time, Jeff Kent will always be The One Who Got Away.

It’s pretty apparent now that the Blue Jays are the easiest team to pitch to in the Major Leagues. Today the Red Sox decided to test how many times they could throw high fastballs to get swinging third strikes and the Blue Jays’ collective answer was ‘way too many’. Got a runner in scoring position vs. a Jays hitter? Just throw first pitch fastballs, get ahead in the count and then watch them get themselves out by chasing terrible pitches out of the strike zone.

You just knew this game was going to end how it did, right? You knew the Jays weren’t going to score any more runs. You knew Marco Estrada wasn’t going to get away with 7 walks. You know the more athletic, more patient, more savvy Red Sox were going to find a way to make this game theirs. The creeping sense of doom you feel every time they go to extra innings is because, if nothing else, this team’s exhausting futility is nothing if not predictable. Once again, no runs scored without a home run in an 11 inning game. 2 for 7 with runners in scoring position and one of those hits was an infield single which didn’t score a run. They exhausted their bullpen before a quick turnaround before a day game tomorrow. They allowed the Red Sox 14 (!) walks tonight – the most allowed by any team in a Major League game this year. You know that relative optimism you managed to maintain through the end of May? This week will likely put an end to it. Tomorrow it’s Joe Biagini vs. Chris Sale.

COULDA, WOULDA, SHOULDA
(after each loss, three things that might have made the difference)

As a fake writer, I’m so pleased to have Ezequiel Carrera back playing left field, because almost every time he plays out there, a calamity worth writing about occurs. In much the same way that late night talk show hosts have loved Donald Trump and George W. Bush’s presidencies, because there is/was never any shortage of material, Carrera makes the job of an obscure blogger so much easier. Tonight, he started off the sixth inning by losing Jackie Bradley’s lazy fly ball in the…sky, letting it fall for a leadoff double. I have watched the Blue Jays play at that park for over 25 years. I have never seen a left fielder do that. If he COULDA made that play, like every other MLB outfielder has done there since the Rogers Centre was christened, the Jays certainly don’t allow two runs in the inning and likely would not have allowed any. Instead of a tie game after 9 innings, the Jays might have ended regulation with a lead.

In the third inning, the Jays had a 3-0 lead and had loaded the bases with two outs for Troy Tulowitzki. I don’t even need to tell you what happened then, do I? He grounded out to the pitcher on a week ground ball (couldn’t help myself) after taking a first pitch fastball right down the middle for strike one and chasing a terrible pitch for strike two. To a certain degree, batting with runners in scoring position is luck, but for Toronto it isn’t. Instead of being aggressive and going after pitchers who are in bad situations, the Blue Jays’ passivity is what kills them. The scouting report for other teams is clear – with RISP, Toronto hitters will watch a first pitch fastball go by for strike one and then they’ll start chasing the breaking stuff. It’s an absurdly ineffective approach but it is precisely what takes place. If Tulowitzki and the rest of the Jays WOULDA figured that out six weeks ago and done something about it, they wouldn’t be nearly as horrendous as they look now. #FireBrookJacoby

Before the season started, when discussing which Blue Jays player was most likely to be traded if the team weren’t in the race at the All-Star Break, Marco Estrada was the first name that came to my mind. A playoff-proven veteran pitcher in the final year of a reasonable contract, he SHOULDA been among the most attractive guys available for contending teams looking to strengthen their rotation. Safe to say, he is no longer a guy anyone will be looking to take off of the Jays’ hands next month for the playoff stretch, much less part with any kind of a prospect for. In his last 6 starts, he has averaged just 4.1 innings, issued 18 walks and allowed 28 earned runs. The Jays are now faced with the harsh reality that if they are going to look to trade assets at the deadline, the only guy any team is going to be willing to trade for that they should consider dealing is the newly clean-shaven guy playing third base (I can’t even say it out loud, but it’s the truth). Are you ready to see Josh Donaldson playing for the Red Sox or the Yankees?