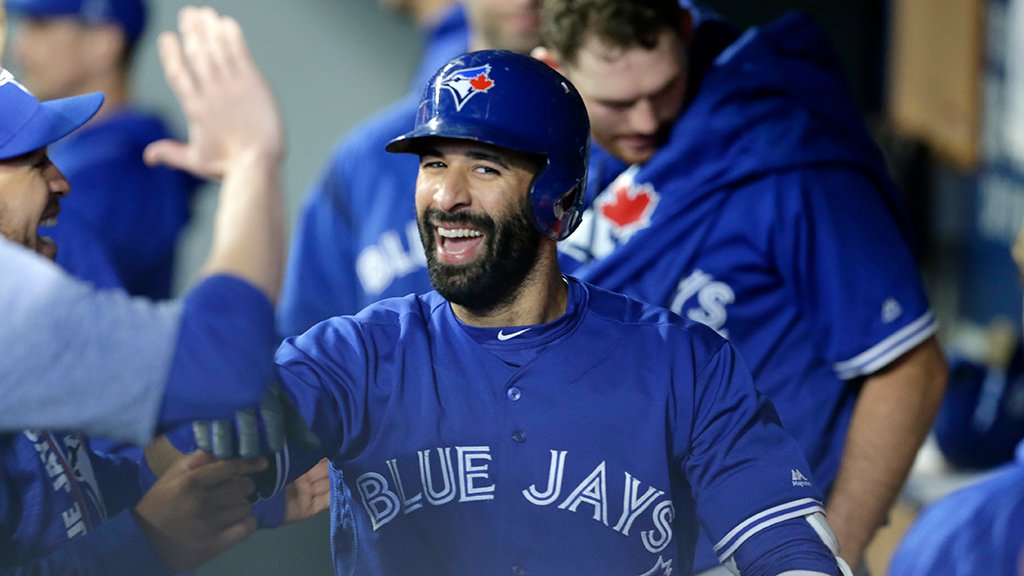 While I realize that many Canadians live and work throughout the United States, summoned south of the 49th parallel by work opportunities or by a relationship or by the chance to live close to an In’n’Out Burger, but I’m still amazed at how many folks show up wearing Blue Jays jerseys, t-shirts and hats in opposing ballparks these days. Throughout this series in Texas, for example, there have been countless crowd shots of families and friends, all sporting Blue Jays gear. It seems to me that there are indisputably more of those fans in the last few seasons than there were ever before (and not just in Seattle). Obviously Toronto’s return to relevance as a baseball team has been a factor, but I also think a reason is that fans aren’t embarrassed to wear Jays gear anymore, either. The black, blue and silver atrocities that the Blue Jays foisted onto players and fans between 2004 and 2011 were easily the worst uniforms in Toronto sports history (yes, even worse than the Raptors’ inaugural dinosaur-themed purple unis – they had a certain naive charm). Combine uniforms that looked like Blue Jays players had collectively lost a bet with a team that was never any good and native Canadians justifiably stayed home when their team came to play in their new hometown. I think the combination of the Blue Jays being competitive again and the fan garb not being humiliating has emboldened ex-pats to venture forth and proudly show their colours in previously unseen numbers, even in a place like Arlington, where the drunk, angry Rangers fan sitting beside them is likely carrying an AK-47. You know, in case there’s a shooting at the game.

I mean, which one of these would you choose?

Literally nothing good ever happens in Arizona – it’s the place that still elects John McCain. Steve Nash, Lute Olson and Dan Majerle have all retired and yet I still almost moved there because of that delicious In’n’Out goodness pictured above.

I’ve gone on ad nauseum this season about how the Blue Jays’ bullpen is going to fall apart if they’re continually asked to pick up the slack for starting pitchers not going deep enough into games, but tonight John Gibbons didn’t help that problem when he pulled the plug too soon on Joe Biagini. Leading 7-3 in the sixth inning Biagini had thrown just 90 pitches when he gave up a two out bloop single to Mike Napoli. If Gibbons doesn’t have confidence in his starting pitcher after giving up a soft single while up 4 runs with 2 outs while still comfortably under 100 pitches thrown, then this team is in real trouble. Biagini wasn’t great tonight but he certainly didn’t appear to be on the verge of collapse and Aaron Loup actually has reverse splits and is more effective vs. right-handed hitters. Giving Joe the hook so Loup could face lefty Nomar Mazara made very little sense to me. It made even less sense when Loup was then immediately taken out of the game after giving up a double to Mazara so that someone else could face righty Delino Deshields. Gibbons overmanaged the bullpen tonight and it almost cost him the game. As a San Antonio native, he should know that Texas is no place to be gun shy.

A BIG MOMENT In the top half of the first inning, the Jays’ new/old leadoff hitter Jose Bautista drew a walk, took second on an error and was advanced to third on a groundout by Dwight Smith Jr. Josh Donaldson was then called out on a very questionable third strike for the second out. It looked like yet another episode of “Stranded – the story of Blue Jays baserunners” was being filmed to start the game. Then, (cue stompin’ country music) our new cleanup hitter Justin Smoak came to the dish and promptly stroked a single to right field to score that run and keep the inning alive. After Smoak’s hit, Rangers starter Tyson Ross simply fell apart, allowing a single, double, double (on an 0-2 count to Ryan Goins) and a home run (to Darwin Barney!!), meaning the Jays scored six runs with two outs. They barely managed to hold on to a 7 run lead tonight, but getting an unconverted touchdown in the first inning that looked perilously close to being another dud was a big key, especially when the first 4 of those runs came without the help of a home run.

A BIG PLAY After Joey Gallo’s inside-the-park home run to start the fifth inning (that guy runs really well for a big dude!), Texas had narrowed the score to 7-3 and then put runners at first and second with just one out. Joe Biagini struck out the dangerous Nomar Mazara on three consecutive pitches for the second out and then induced a ground ball up the middle from Adrian Beltre. By the time Darwin Barney had fielded the ball, the speedy Elvis Andrus had outrun the force play at second base, but the former Gold Glove winner Barney snuffed out any further damage with a heads-up play, throwing Beltre out at first to stem the tide. The future Hall of Famer can still hit and pick the ball at third base, but his 38 year-old legs are beginning to fail him and Barney’s quick thinking took advantage of his lack of speed to get Toronto the third out it desperately needed and suture up what could have been a very bloody inning.

…AND A LITTLE THING With setup man Joe Smith on the Disabled List with shoulder inflammation, Danny Barnes and Ryan Tepera have been temporarily thrust into more prominent bullpen roles. These kind of role adjustments can be tricky, but this season both men have generally risen to every new challenge presented to them and they did so again tonight. Barnes filibustered Texas’ 2,3 and 4 hitters in order in the seventh inning on just 10 pitches and then Tepera got Rougned Odor, Jonathan Lucroy and Mike Napoli in order in the eighth to get Roberto Osuna the ball for a clean ninth inning. After Texas had rallied to score 5 runs in the previous 4 innings, two shutdown late innings from young pitchers not known to work in high leverage situations were immensely valuable, even if they won’t get much pub for it.

What the hell is that design in the outfield grass at Globe Life Park? I haven’t seen a full aerial shot of it, but in right field it looks like a giant Pac Man sketched by a five year-old who’s been sniffing paint thinner.

If Matt Devlin is going to do a few Jays games over the summer to give Buck some time off, (which I’m just fine with, BTW), couldn’t he have Jack Armstrong come along with him? I’d love to hear Armstrong’s candid takes on the Jays while discussing his favourite local breweries. Those two have a comfortable, loose rapport during Raptors broadcasts, clearly enjoying one another’s company even when forced to watch the Orlando Magic five or six times a year. It’s a long season – so why not have some fun and mix things up a bit, Sportsnet? It would be great to have the ‘basketball guys’ do a midseason series together, just to hear some different voices and change things up a bit. Listening to Devlin attempt to massage a similar kind of humour and joie de vivre with/from the human Maple tree known as Pat Tabler is just painful to listen to. It must suck for Devlin, too.