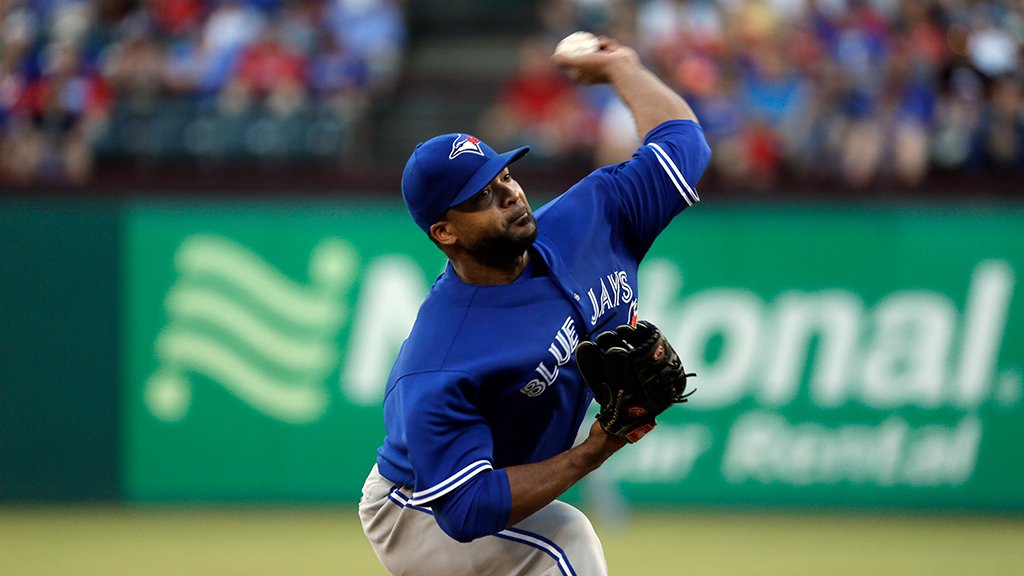 Going to play a four game series in Texas feels less charged than it did last year. Despite the fact that no one other than the players seems to want to forget the Odor/Bautista punch-up, both of these underachieving teams need wins more than they need petty vengeance. While I’m sure things could flare up if a few things ‘went down’ (as we saw last May, in front of the bloodthirsty Texas fans Globe Life Park can start to feel like the Roman Coliseum pretty quickly), it still seems like these teams both just want to play baseball. Suits me just fine.

Marco Estrada has allowed 23 earned runs and 35 hits in his past 4 starts. He handed Texas the lead early tonight, then his team rallied and got him ahead by four runs and he gave the lead back immediately. He had made good pitches in the third to escape trouble and overcome his wildness, but couldn’t pull off the same Houdini act in the fourth. His location was terrible the entire game and the Rangers weren’t really buying anything he was selling. He tried to get them out up in the zone a lot but too many of those pitches got clobbered or were left alone for walks. He hasn’t won or looked right for a month, despite the fact that the pitching matchup favoured him on paper in each game so far in June.

That likely means the Blue Jays have to keep considering themselves in the pennant race because their best potential trade asset if they were sellers at the Trade Deadline has pitched like a late career Josh Towers and isn’t going to end up on anyone’s wish list.

BASKING IN THE GLORY
(after each win, three things that may have been the difference)

A BIG PLAY – With the Rangers having clung to a one run lead for four innings, the Jays were staring down the barrel of a crushing defeat tonight with flame throwing Texas reliever Matt Bush on to preserve it. On the first pitch of the inning, though, Ryan Goins hit a ball into the left centre field gap and hustled his way in to second for a leadoff double. Goins’ aggressiveness and hustle to begin the inning was a major boost for Toronto to come back and score two runs to take the lead late and steal a win. Anytime your #9 hitter starts the ninth inning with an extra-base hit against a team’s closer with a one run lead it is noteworthy.

A BIG MOMENT – It didn’t get much attention at the time, because Marco Estrada and the Blue Jays had just blown a four run lead almost as soon as they got it, but Aaron Loup was the player of the game tonight. After Dominic Leone struggled with his control in the fifth inning to walk the bases loaded with just one out, tonight’s game was beginning to look like a lost cause. But Loup came in and changed the tenor of the evening by striking out Shin-Soo Choo and retiring Elvis Andrus on a ground ball to the mound and needing just five pitches to get them both. He also then easily retired Texas’ next three hitters in the sixth inning and kept the game within reach. If Loup makes even a slight misstep while navigating his highwire act in the fifth, this game has a very different end result that likely doesn’t include a comeback Toronto win.

…AND A LITTLE THING -It is comforting to know that Josh Donaldson is not capable of sucking for two full games. After struggling at the plate in key situations and committing two defensive miscues yesterday, J.D. also didn’t have a very good first 7 innings tonight, either, going hitless in his first four at-bats. Eventually, though, something clicked and he remembered that he is in fact an alien life force sent here to dominate mere mortals. The return to form began in the bottom of the 7th when he made a diving stab to rob Mike Napoli of a hit, easily one of his best plays of the year. Then in the 9th inning he got his first hit of the game to drive in Goins for the tying run. He then stole second base easily and scored the game’s winning run on Kendrys Morales’ gapper to left. It was a long, hard 16 innings for folks to watch you be anything less that perfect, Josh. Good to have you back.

During the game, the cameras focused on a few women in the crowd enjoying tonight’s game in Arlington, each of them wearing St. Louis Cardinals t-shirts. I’ve never understood this phenomenon. Y’know – the guy who wears a bright purple and orange Steve Nash-era Phoenix Suns jersey to a Raptors-Pacers game or the dude who rocks his autographed, game worn Larry Robinson Habs sweater at the ACC when the Leafs are playing the Coyotes. It’s a very strange phenomenon. What is the message these fans are attempting to send by doing this? “I like this sport so much I don’t care who plays”? “Dress for the job you want, not the job you have”? “I don’t know which city I’m currently in”? This isn’t about just grabbing a ballcap on your way out the door and it happens to be that of an uninvolved team. I’m talking about leaving your home to go to the game after having looked in the mirror and made the concrete decision to appear as though you really have no idea what’s happening or who’s involved. Then again, I guess it worked for this guy for a while:

This week’s best reader comment comes from an avid Jays fan named Jack, who had some pretty bold opinions about my summary of Game 61 (Tough Love). I haven’t changed anything within the post because I wanted to preserve the spirit in which it was written and to give Jack the credit he deserves for being so insightful about my writing. He demonstrates such wisdom here it’s almost as though he can see directly inside me, piercing through my smart ass facade like so much gossamer and exposing me for the frightened, lonely child that I really am. That we all are.

“Nicely like mommy stated, once we love each other and love the world that Jesus died for, that?s a kind of worship. After we take into consideration God and take heed to the sermon or to the Sunday Faculty, that?s a approach of worshipping because wwe are studying how great God is and He likes that. Or after we sit round and tell each other what the greatest things about God are. You understand how much youu want hearing people say how smart or cute you boys are? Properly God likes whern we talk collectively about how nice he is.? Daddy answered. ”

Just let that sink in for a few moments…pretty staggering stuff, huh?

In a development as surprising as finding out that water is wet, Francisco Liriano was neither great nor reliable tonight. He made a couple of bad pitches to good hitters and he paid for it. In fairness, though, he didn’t get much help either. After allowing a solo home run to Carlos Gomez in the first inning (who I think at this point is actually Liriano’s legal owner at this point), he COULDA escaped without further damage but Toronto centre fielder Kevin Pillar badly misread a line drive by Jonathan Lucroy that allowed another two runs to score instead of being the third out. If you had any doubt that God loves the gay community just take a look at Kevin Pillar’s play in the month since he returned from his “incident”. Since that unseemly outburst Pillar has been subpar on defence and an utter atrocity at the plate. By the way, June is Pride Month in Toronto. Coincidence? I think not. That’s karma, friends. Somehow karma narrowly missed getting Karen Handel in Georgia tonight, but it’s coming for her, too.

I’ve watched a lot of baseball games in my life. In fact, I’ve probably spent more of my non-sleeping leisure time watching baseball than doing any other thing in my life. In that time, I have never seen a team win a game without scoring at least one run. They managed one late, but Toronto probably WOULDA upped their chances tonight if they had managed to muster more than 2 hits in 6 1/3 innings vs. Texas starter Nick Martinez, who probably wouldn’t even be in the majors if Cole Hamels weren’t hurt and has a career ERA of around four and a half. Losing is one thing, but losing games where your team should have a distinct advantage in starting pitching is another. The 2017 Toronto Blue Jays lose far, far too many of those kind of games to be taken seriously as contenders right now.

I never exaggerate but with the bases loaded and one out in the seventh inning, I’d say Rangers reliever Jose Leclerc threw Steve Pearce about 175 consecutive really hittable, hanging sliders. All of which Pearce failed to do anything with before finally being retired, watching a belt high fastball go by for strike three. He SHOULDA been able to turn at least one of those pitches around and make the game somewhat interesting. Granted, Ryan Goins notched a run-scoring single right after that, but he was followed Kevin Pillar with two outs, and we know what that means. In the biggest at-bat of the game Pillar flailed like Clubber Lang at the end of Rocky III, chasing three consecutive non-strikes to end a once-promising inning with utter frustration. With the bases loaded and Josh Donaldson on deck, any half-assed MLB hitter has to know that all of the pressure is on the young pitcher in that situation and force him to make good pitches. I think we’ve seen enough of Kevin Pillar to know that as a hitter, he does not have even half an ass. When he’s playing above average defence in centre field, it’s semi-tolerable. When he’s not (and he’s not been above average this year by any measure), he looks like the oldest member of the New Hampshire Fisher Cats.

Troy Tulowitzki’s at-bats tonight: (1) ground out to shortstop in the 2nd inning, (2) flyout to shortstop in the 5th, (3) walk, (4) grounded out to shortstop in the 8th. He now has an on-base percentage under .300 and a slugging percentage under .340. Rangers shortstop Elvis Andrus literally made more plays on balls Tulowitzki ‘hit’ tonight than Tulowitzki made on defence vs. the entire Rangers lineup. You can start the office pool now for what date Tulo gets his outright release from the Blue Jays. My money is on early June 2018, which would be more than 2 1/2 years before his lucrative contract expires, and judging by the way he looks right now, at least one year too late.