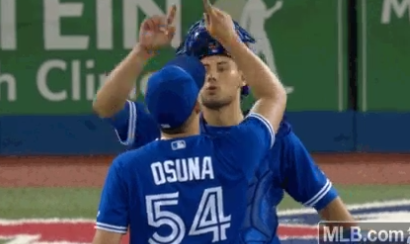 Firstly, our continuing countdown of the finest seasons by starting pitchers in Blue Jays history. Today we’ll look at numbers 12 to 10.

12. RICKY ROMERO (2011) It looked like things were all coming together for the young lefty to embark on a great career in 2011. Roy Halladay had just left town and Romero, the sixth overall pick in 2005 (one pick before the Rockies selected Troy Tulowitzki) showed every sign that he was becoming the young ace every team needs to succeed. As a 25 year-old the previous year he threw over 200 innings for the first time and he arrived at the next year’s Spring Training ready to assume the role of a #1. He threw 225 innings, allowed just 176 hits and struck out 178 batters. The 80 walks he issued tell us that his 2.92 ERA was a bit lucky, but some seasons a guy just has a knack for making big pitches and this was his season. After playing in his first All-Star Game, he was named A.L. Pitcher of the Month in August when he went 5-0 with a 2.05 ERA. The Jays then gladly doled him out a four year, $27 million contract despite being four years from free agency. Proving that God hates teams with terrible uniforms, it all fell apart the next year when his knee began to fail him. In 2012 he endured a 1-13 stretch with a 7.35 ERA before being sent to the minors. Instead of this season being the beginning of a promising breakout, it was the beginning of a precipitous breakdown. He threw just 7.1 innings with an 11.05 ERA in 2013, his final MLB season over at age 28.

11. JIMMY KEY (1985) – Of all the Blue Jays free agent departures, Jimmy Key’s still hurts me as much as anyone’s. A third round pick of the Jays out of Clemson in 1982, the soft-spoken lefty was never as sexy as Juan Guzman or Jack Morris or Todd freaking Stottlemyre in the eyes of team management (he wasn’t even given a start during the 1992 ALCS vs. Oakland), but he was a better pitcher than all of them. Making the first starts of his MLB career after spending the previous season in the bullpen, Key finished 1985 with a 3.00 ERA (141 ERA+) over 212 innings, allowing 188 hits, walking just 50 batters and making his first All-Star Game appearance. He only struck out 85 batters that year, which might explain the lack of love, but outs are the most important currency in baseball and Key used backdoor sliders, pinpoint control and a deadly pickoff move to get a lot of them for a long time. This was just the beginning of a very good MLB career.

10. JUAN GUZMAN (1996) – Yes, I just said Key was better than Guzman but Jimmy’s got another season further down this list and Guzman does not. We tend to remember Guzman (with his hair on the ‘wet look’ Mt. Rushmore) being a major contributor for the Jays’ 1992 and 1993 World Series-winning teams, the reality is that his best season by far for Toronto came a few years later. While always possessing great stuff, Guzman struggled to harness it, explaining why Toronto was able to acquire him from the Dodgers in 1987 while he was still only 20. He led the league in wild pitches twice and in 1993 somehow managed to walk 110 batters and only lose 3 times. In 1996, even though he was pitching for a less than memorable Blue Jays team, he finally sorted himself out. He led the A.L. in ERA (2.93), WHIP (1.124) and ERA+ (171) and walked just 53 batters in 187 innings while striking out 165 and allowing 158 hits. I remember being so excited going into the 1997 season because the Jays would have ERA champ Guzman, defending Cy Young winner Pat Hentgen, Roger Clemens, Woody Williams and Chris Carpenter in their rotation that year. They somehow still managed to finish 8 games under .500. Maybe God had gotten word already that Toronto’s management was considering switching to those ugly uniforms soon.

If the Jays can play .500 baseball on the road as they did on this road trip to Oakland and Seattle, and play .700 at home as they did in the 10 games before they departed, they’re in business. Easier said than done of course, but with the rotation starting to take shape and most of the team on the brink of returning, there is reason for optimism. After losing the first two games of this road trip, coming home .500 seemed about as likely as Mel Gibson winning the Irving G. Thalberg Award at this year’s Academy Awards.

The Jays’ next 12 games are against Tampa, the White Sox, Texas and K.C. before heading into a brutal stretch where their final four series before the All-Star Break are against Baltimore, Boston, the Yankees and Houston. It would be ideal for them to get some momentum and finally get above .500 before running that gauntlet. Ideal doesn’t seem to be how they do things, though, does it?

A BIG PLAY – Seattle starting pitcher James Paxton, a B.C. native who was a first round pick of the Blue Jays in 2009 but refused to sign, has been ablaze so far this season for the Mariners. He entered tonight’s game with a 1.69 ERA over 48 innings and had allowed just one home run this entire season. I’ll give you three guesses which Jays player looked at those statistics and then spit all over them in the first inning. Having worked the count to 2-0 with Kevin Pillar on second and none out, rather than gearing up to try to pull the ball 500 feet, Josh Donaldson stayed with an outside fastball and drove it out over the right field wall to give Toronto a 2-0 lead before Paxton had even retired a batter. To quote Schwarzenegger in Predator, “if it bleeds, we can kill it”. It was an important, authoritative blow landed early in the game and it allowed J.A. Happ to pitch aggressively and with a lead, a nice bonus for a guy who’s still finding his way back.

A BIG MOMENT – After getting out to the 2-0 lead, the Jays had bases loaded and one out in the second inning with their #3 and #4 hitters due up. Jose Bautista then struck out and Kendrys Morales grounded out harmlessly, leaving a sinking feeling that the Jays were going to finish the game with just the two runs and let Paxton dominate for the next seven innings (I even tweeted that exact idea, proving that I am, in fact, the King of Public Cold Takes. If I had just kept that idea to myself, it would have happened. Because I put it on social media, it became incorrect almost immediately). Yes, that’s right, despite yet again failing with runners in scoring position again in the 2nd, Toronto managed not one but (count ’em) two run-scoring singles in the 4th (one by Donaldson, one by Morales), doubling their lead and forcing Paxton out of the game after that inning after throwing just under 100 pitches. Add-on runs are important on the road and rare for this team, so doubling their early lead before things had a chance to get tight was a nice psychological edge.

…AND A LITTLE THING – Happ started to look more like his old self today, spotting his fastball all over the zone effectively enough to strike out 8 Seattle hitters in 6 innings while allowing just 6 hits and one walk. The difference maker for him was that he retired the first Seattle batter in every inning he pitched. As a result, every Mariners inning felt like a long shot and never had a chance to amount to much.

Troy Tulowitzki is 10-for-52 with 4 walks, 3 extra-base hits and 9 strikeouts since returning to the lineup from injury and has already committed 5 errors in 29 games this season. He is already the only shortstop in the Major Leagues who is a base running liability. He is also owed 54 million dollars over three years after this season. In the theatre world, when someone asks you about an actor or director, if the first thing out of your mouth in response is “he/she is really nice”, then they are probably a sucky actor or director. I’m afraid we’ve arrived at the time in Tulowitzki’s career where the Jays are paying a pantload of money to a guy where “he’s really good in the clubhouse” will be the first thing out of your mouth when you’re asked about him as a player.

Speaking of contracts (and obligations), is Ezequiel Carrera contractually obligated to commit a terrible defensive play every single game? Steve Pearce is going to look like the second coming of Barry Bonds in left field when he gets back.

Today the Mariners batted mop-haired Muppet Show rejects Ben Gamel and Taylor Motter back-to-back in the lineup. I kept waiting for it to turn out to be some kind of ruse plot point in Ocean’s Fourteen, with a ‘Legends of the Fall’ era-looking Brad Pitt batting over and over again from either side of the box in order to confuse the crooked MLB commissioner, who is played by Warren Beatty.