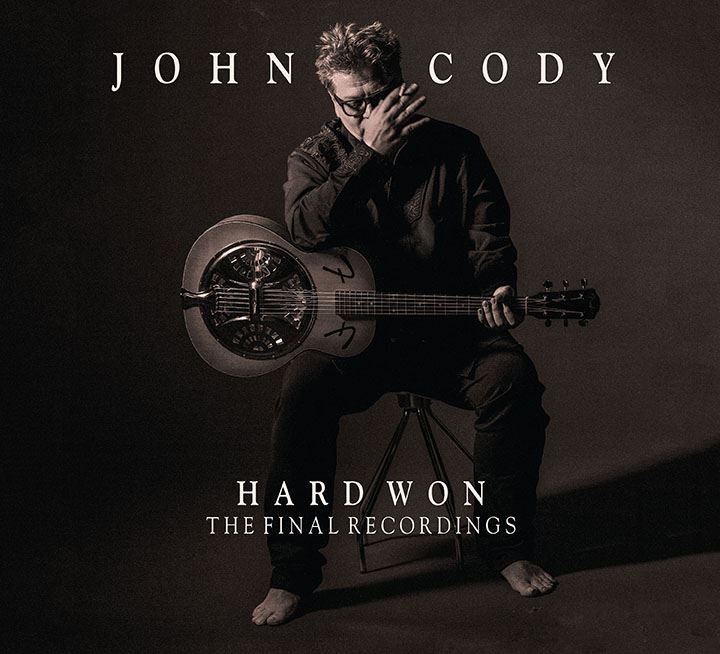 Montreal-based singer-songwriter John Cody released his fourth and final album, Hard Won: The Final Recordings on May 26, 2017. To tell the truth, no truth to tell… he laments on “The Devil’s Radio”. When did life become a public address? In a way, this album is John’s form of public address, but with plenty of truth to tell.

Cody’s lyrics are thoughtful and observant, telling stories that touch on love and loss, and fame, and the album boasts an impressive list of guest contributors, including the likes of JUNO Award-nominee Damnhait Doyle, multiple GRAMMY Award-winner Jennifer Warnes, The Landreth Brothers’ Joey Landreth, acclaimed actress Sharon Stone and JUNO Award-winner Tom Cochrane. John is one of those artists whose work writing for and with artists like Keith Urban, Christopher Ward (“Black Velvet”), John Capek (“Rhythm of My Heart”), and co-authoring GRAMMY-winner Bonnie Raitt’s Fundamental and Holly Cole’s Dark, Dear Heart, is more famous than his solo work. But, when it comes to his own music, John has always considered himself a singer first.

That’s why the news he got about a year ago in May 2016 was so devastating. Or potentially, at least. Cody was diagnosed with cancer of the larynx, and was informed that the larynx would have to be removed. With a little support from his friends, including Slaight Music, and some successful crowdfunding, he was able to finish his last album of 13 original songs and three covers before the surgery last summer. Perhaps surprisingly, it’s an upbeat collection of tracks ranging from pop rock to jazzy tunes, with honest, insightful lyrics.

In your music, I hear different styles from melodic 1970s pop-rock to contemporary jazz – I’m wondering what you listen to, and what your influences are/were?

Boy, that is a LONG list. Joni Mitchell asked me that question once over dinner and my response was: Miles Davis, Nat King Cole, Ray Charles, Stevie Wonder, Prince, Bob Dylan, Leonard Cohen, and you! She said: Good shit, kid! I could add a great many names to that list but, in a nutshell, that’s still the best answer! Those are the key players for sure.

It’s a thoughtful and essentially upbeat album – was that a difficult focus to keep under the circumstances?

The interesting thing is that, despite ill health, I found it essential to revel in my circumstance. In fact, it allowed me to some degree, to gather the best of the many people I’ve worked with over what I refer to as the arc of my career. Which is what you want in the studio. Emotional honesty and high spirits on the part of all the players as well as myself. I was NOT feeling sorry for myself. Sure, it was hard at times and painful because of the physical limitations but, I had a gas making this music with some of my dearest friends and some new ones too. You dig? Ha ha Oh boy. The focus was the songs. It was relatively effortless to keep it although there were SOME musical passages that I forgot and had to relearn for example. A difficult thing to do on the fly when the clock is ticking and time is money I might add.

Lyrically, the album is observant and philosophical – were you thinking of particular messages you wanted to send with this release, or were these songs that you already had in progress at the time you were recording?

The songs kind of tell me what to say in some fashion. A better way of putting it is to say that they guide me through the events of my life and help me decide what to reveal. I realize that’s a metaphysical way of approaching it but it works for me. The song is king. It’s what the song wants and not the other way around. I live in deference and service to my muse and it has served my work well, I think. Some of these songs were works in progress so the opportunity to finish them for this album was fortuitous. I’m a prolific composer so there’s never a shortage of material and in that way I am blessed but this record was a way of saying goodbye. I was saying goodbye to my singing voice and to the folks out there that enjoyed that voice and also felt that they needed it from time to time. It was also a way of saying hello to new friends who had never heard it with the optimism that they might go back and check out some of my previous recorded work as well. I chose these songs in relation to their importance to me also. I knew this was going to be my last album so it seemed very prescient to me to follow a kind of journey in my compositions that would shed a light on a life in total. An adult one I suppose.

You’ve included the cover of “Little Red Corvette,” which I understand was your last live performance. Other than – of course – the occasion of Prince passing on, was there a reason you chose that particular song?

In many ways it’s a terrible performance but that is what my voice was reduced to at that time. I seriously considered leaving it off the album but in the spirit of what was being offered in this collection I thought it was important to leave it on for posterity’s sake. To me it was significant to show it for what it was and not ‘fix’ it. That’s what a sick voice sounds like and I felt that people could handle it. I knew a lot of people that were there at the Unison benefit that night wouldn’t know me very well so, I chose that song because I thought people would recognize it and might like singing it along with me and they did. Losing Prince, especially in the way that we did, was a huge moment for all of us. In the whole world this horrible news rippled through everything that was going on. Singing one of his songs was a way to unite in our grief and heal. At least even the attempt was worth it. This was a night to acknowledge the hardships of many artists that fall on very difficult times as a result of not being paid properly among a great many other things, some of which have to change at a legislative level with regard to copyright laws, illegal downloading, etc. And many of us, like myself, end up very ill with no recourse or resources available. Prince was a good example of someone that was in tremendous pain as a direct result of the damage done to his body through years of performing. His demise was because of trying to cope with that pain. Something I can relate to deeply.

Will you stay active in the industry writing and/or playing music?