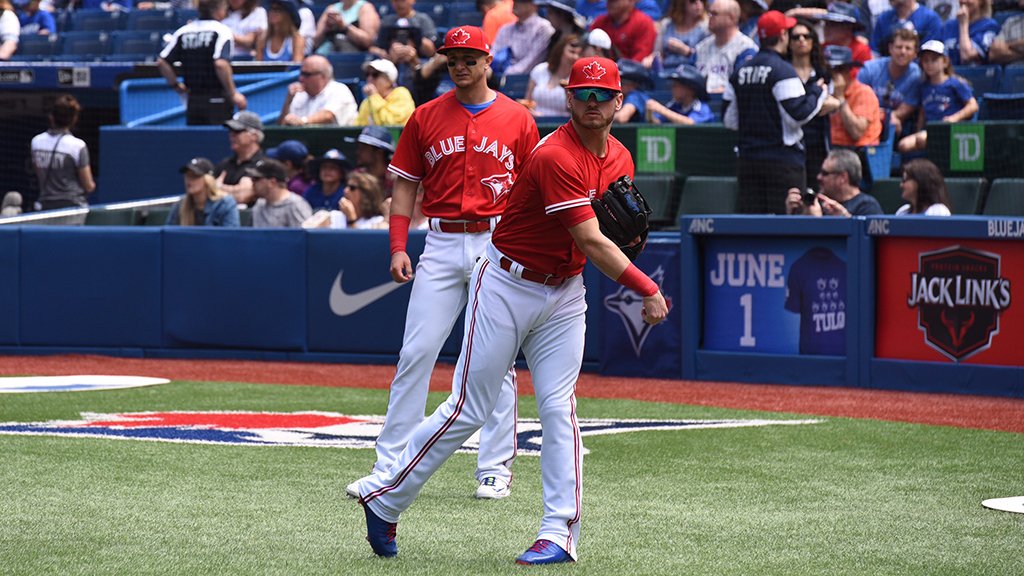 The 50th game of the season is often used as an arbitrary yard marker for teams, a spot on the schedule marked by both by the fans and by their General Managers as a time to evaluate where their team is currently sitting and what to begin to prepare for for the rest of the season. It usually occurs around the American Memorial Day holiday weekend and 50 is a nice, round number that represents nearly 1/3 of a full season.

At this point it is very difficult to tell where the Blue Jays are and where they are headed – even the 50 game subsection of the season can be divided into two very disparate halves. It would have been difficult for their first 25 games to have gone worse – injuries and general ineffectiveness buried Toronto at the bottom of the A.L. East with an 8-17 record. The next 25 games they started to get healthier, both physically and psychologically, almost evening things out and it is undeniable that there feels like some momentum is mounting. They are only 7.5 games out of first place, but they have four above .500 teams to pass on the way.

As they say in baseball, though, momentum is only as strong as your next starting pitcher. Today the Jays got a pretty solid performance from starting pitcher Joe Biagini but it wasn’t enough because Andrew Cashner outduelled him, making one or two less mistakes to win his first road start in 19 attempts. Just between us, a team looking to make up 7.5 games in the standings can’t come back to the clubhouse after games muttering “we just couldn’t touch Andrew Cashner today” very often. They’re still in it, but the margin for error(s) is small.

(after each loss, three things that might have made a difference)

Joe Biagini has pitched pretty well since joining the Blue Jays’ starting rotation and has been a bit unlucky,winning just one of his five starts thus far. To change that, he is going to have to start helping himself in some key, little ways. For example, in the third inning today he probably should have let third baseman Josh Donaldson field a slow roller from Elvis Andrus. Biagini tried to field it himself, but his momentum coming off the mound was taking him away from first base, making the play impossible with Andrus’ above average speed down the line. I’m not sure J.D. COULDA made the play, but he was the only shot they had. Andrus later advanced and scored the game’s tying run, which made Biagini’s overzealous miscue hurt even more in a tight game.

Ralph Waldo Emerson said (rightly, I think) that consistency is the hobgoblin of a little mind. I think we can agree that Joe Biagini has a pretty expansive and open mind, but he’s still being far too consistent in his delivery with runners on base. Texas’ first run WOULDA been kept off the board if Biagini had done a better job of varying his times before delivering a pitch to the plate as Andrus stood at first base. The Rangers’ career stolen base leader needed only a few pitches to note the general predictability of Biagini’s timing once he came set. As a result, he got way too good of a jump and Russell Martin was unable to catch him stealing second despite a strong throw. As Biagini gains more experience as a starter, he’ll master the little things like that make a big difference, especially in a tight game like today. Opposing teams will have more chances to note his tendencies watching him over 6 or 7 innings instead of just one, so he’s going to have to work a little harder to keep things interesting.

It’s revisionist history, (well after all, the column is called Coulda, Woulda , Shoulda) but I felt Jose Bautista SHOULDA tried for second base after hitting a ball off the base of the right field corner wall with one out in the sixth inning. The ball was not hit that hard and, though Nomar Mazara has a strong arm and got a nice bounce off the wall, it still would have required a perfect play to throw Bautista out, but he held up anyway. If Bautista reaches second base on that play, Kendrys Morales is able to come to the plate with one out, the tying run in scoring position and the Rangers unable to use a defensive shift on him because they have to keep Jose from stealing third. It also would have kept the (understatement alert!!) slow-footed Morales safe from the possibility of grounding into a double play, which is exactly what happened – and it only happened because Texas was able to have their shortstop play right up the middle in – you guessed it – a defensive shift.

After spending two months on the Disabled List with a concussion, outfielder Dalton Pompey begins his return to active duty today in Dunedin. He looked like a different player this spring – more confident and dangerous. It will be interesting to see whether a major league roster spot awaits him once he clears all the health protocols. His switch-hitting, speed and defence would all be welcome additions from where I’m sitting.

The Rangers’ back-breaking third run tonight scored on what was scored a Wild Pitch breaking pitch from Dominic Leone that Russell Martin tried to catch with a backhanded stab, rather than block. The ball didn’t even bounce before getting past him. In a tight game with runners on second and third, I think Martin will probably tell you that he should have gone to greater lengths to keep that pitch from reaching the backstop.

In Mazara, Rougned Odor and Joey Gallo, the Rangers have three really good-looking young left-handed power hitters who are all under 24 years old. None of them has quite put it all together yet, but there is a lot to like going forward. The problem, as it always is with Texas (they’re the only A.L. team never to win a Cy Young Award) is starting pitching. Ace Yu Darvish will become a 31 year-old free agent after this season with a lot of innings on his arm and they are already burdened with the diminishing returns of the ‘back-loaded’ part of Cole Hamels’ contract. Today’s hero Cashner is injury-prone, already 30 and on a one year deal and there doesn’t seem to be a lot of impactful pitching on the horizon. Until the Rangers begin to draft and develop better starters (Darvish, Hamels and Cashner all grew up in other organizations), they will likely lose a lot of games 8-7 and remain one of the three A.L. teams never to win a World Series.