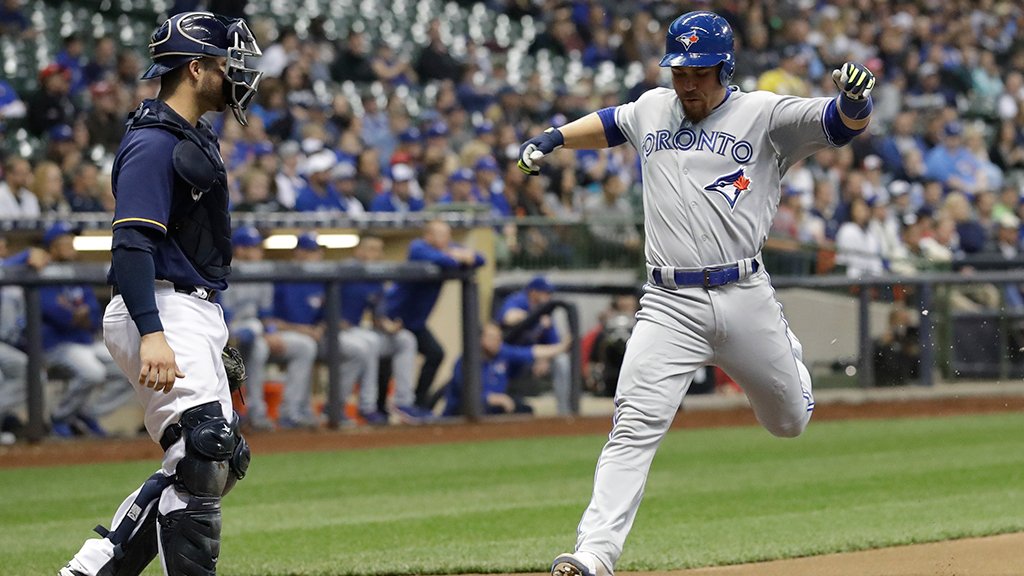 Last week I had the pleasure of seeing a game at Pittsburgh’s PNC Park. It is beautiful architecturally and perfectly located, surrounded by bars and restaurants as well as a beautiful river walk. It feels like it was created with fans in mind. It is exactly the kind of situation and feel that Toronto’s ballpark somewhat lacks. The Rogers Centre area doesn’t have much of a neighbourhood feel, even though approximately one bajillion people live in that area now. One of the most notable features of PNC Park is the construction of giant statues at the four corners of the stadium exterior in commemoration of four of the greatest players in Pittsburgh Pirates history (Honus Wagner, Willie Stargell, Bill Mazeroski and Roberto Clemente, pictured below with yours truly. Amazingly, the statue is actual size – and I’m 6’3″! No wonder he’s in the Hall of Fame).

It is an embarrassing and borderline crass reality that the only statue outside the Toronto Blue Jays’ home ballpark is one of Ted Rogers, who owned the team for eight forgettable seasons from 2000 until he passed away in 2008. If/once the Jays/Rogers brass eventually realizes how craven this fact is, who would be the player(s) you would immortalize forever outside the Rogers Centre if you could pick? I’ll make the case below for and against a few names that might come to mind. Keep in mind, a statue is the rarest of honours, bestowed only upon the greatest of great players in a franchise’s history, so as much as you may have loved Mookie Wilson…

FOR: A Hall of Fame player and key member of two World Series-winning teams in Toronto, has remained a Blue Jays ambassador since his retirement and is still closely tied to the team.

AGAINST: played just five seasons for the Blue Jays and also played for 6 other teams during his career.

FOR: Blue Jays’ career HR leader (336), played 12 of his 16 MLB seasons in Toronto, was a class act and the face of the team for many of those lean years.

AGAINST: 0 playoff games in Toronto, 0 major awards, not in Hall of Fame and not likely to be.

FOR: 15 seasons with Toronto, he is their career WAR leader, threw the only no-hitter in their history and is likely their best pitcher ever.

AGAINST: no awards, no HOF, generally under-appreciated (and disliked) during his playing days, it would be tough to get a groundswell of reconsideration/statue sentiment going for him this long after the fact. Also, he adjusted his jock on the mound. A lot. Like, before every pitch. So much so that it’s probably what you’d have him doing in his statue and that’s a tough one to explain to the kiddies.

FOR: Cy Young Award winner in Toronto, much beloved by fans, was the face of the franchise in the post-Delgado years. At least 50/50 chance of being a Hall of Famer, likely a 75% chance he’d go into the Hall as a Blue Jay.

AGAINST: No playoff games in Toronto (not his fault, just hurts his statue chances), threw a perfect game in the playoffs for Philadelphia, right now part of the Phillies organization, not Toronto (which has a weird feel to it).

FOR: The most famous home run in Blue Jays history – one of the most famous in MLB history (hey, it got Mazeroski a statue), three Top 10 MVP vote years in Toronto.

AGAINST: just six full seasons in Toronto, zero Hall of Fame chances, the shine of his career has diminished significantly since it ended. He is also probably the worst ex-player-turned-broadcaster in Blue Jays history. Or broadcasting history.

Truthfully, I’m not sure any former Jay has an airtight case for immortalization outside the stadium. Right now, the best choices might be Stieb and Alomar, but that’s just my two cents. It is a nice idea, though. The “Level of Excellence” inside the building sounds like the award you give to the nerd who’s good at math and helps the teacher take attendance. The plaques on said wall don’t really do much for fan interaction, either. The Blue Jays are also still a relatively young team. The Pittsburgh Pirates have existed for 130 years and still only have four statues. Maybe our four statue-worthy players haven’t even been born yet.

A BIG PLAY- With bases loaded and none out in the second inning, Ryan Goins and Joe Biagini were due up for Toronto. Goins was in the midst of a miserable 1-for-26 streak, and Biagini was making his second career MLB plate appearance so Milwaukee starter Jimmy Nelson probably felt like he could escape without much damage. However, Goins’ RBI single to left and Biagini’s RBI ground out got the Blue Jays up 2-0 early in a situation that had “Letdown Potential” written all over it. Ironically, it was the Jays’ subsequent two hitters who were the letdown, with both Kevin Pillar and Ezequiel Carrera failing to capitalize further on what could have been a big inning.

A BIG MOMENT- After Toronto had allowed a 4-0 lead to slip to 4-3 in the fifth inning, the Brewers, who have been playing well and hitting well the last few weeks, seemed to be on the verge of coming back and stealing another game, stealing four bases tonight without being caught. They had just completed a double steal with one out and now had runners at second and third with and their #3 and #4 hitters due up. Danny Barnes was having none of it. The Princeton alum struck out both Ryan Braun and Travis Shaw swinging to end the Milwaukee rally and keep the Jays in front. The rest of the Blue Jays bullpen followed his example, throwing a total of 4 2/3 innings of hitless, scoreless baseball to put this game in the win column.

…AND A LITTLE THING- Full credit to Jose Bautista for playing admirably at third base in his first start at the hot corner since 2013 (I guess Chris Coghlan really doesn’t feel good playing there, because they were both in the lineup tonight and Coghlan was in the outfield (!)). Bautista made every play he could have and even started a pretty double play in the second inning. In addition, he reached base three times, never letting his focus at the plate waver despite the defensive challenges he was facing. In the fifth inning, however, he made a very common mistake while fielding a throw from Russell Martin Jonathan Villar’s steal attempt. Instead of straddling the base to catch the throw, Jose stood in front of the bag, which meant that after he caught the ball, he (a) wasn’t blocking the base and (b) had to then swipe behind himself toward the baserunner, and those two little things allowed Villar to slide into third safely despite a strong throw from Martin. I don’t mention this moment so much as a criticism of Bautista – he stepped in seamlessly for the team in a time of need. I mention it because its a mistake I see a lot of MLB third basemen make and whoever we’ve got playing there, I want to ensure they stay away from those nasty bad habits. Hopefully no one has a chance to get too comfortable there because a certain oddly coiffed player can be rehabilitated soon enough to hold it down the rest of the season…