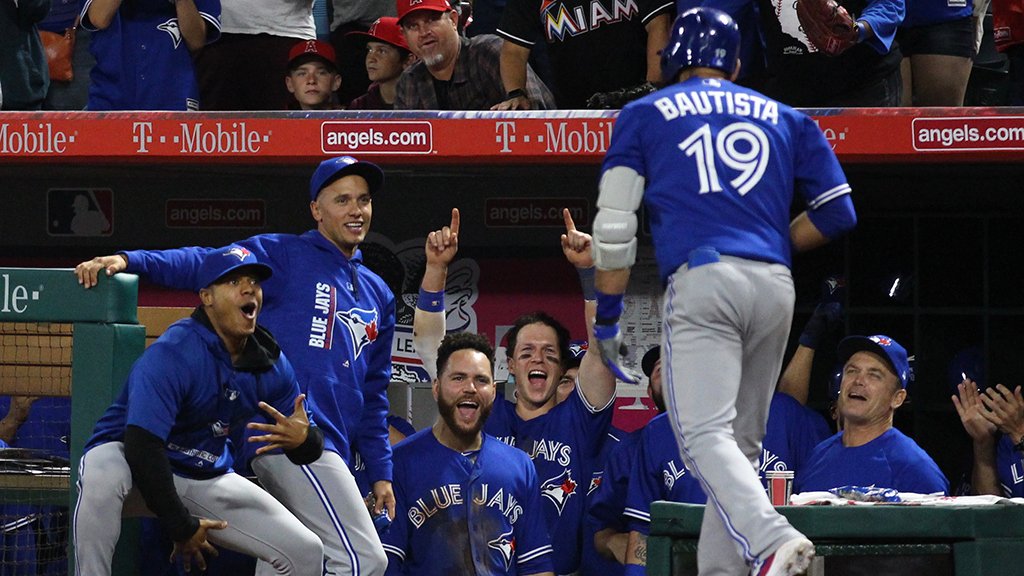 Artificial Turf Blues Game 16: well, somebody had to win

Almost as soon as the Blue Jays left Toronto’s miserable weather yesterday for the sunny shores of Anaheim, I realized that I was going to have to write something about the Angels and Blue Jays. I immediately realized that there isn’t much to write about. They have almost no noteworthy mutual history. The most memorable thing to ever happen between these two teams was likely the January 2011 trade in which Toronto G.M. Alex Anthopolous somehow convinced Angels owner Arte Moreno to take on Vernon Wells’ contract after Carl Crawford had rejected Anaheim’s free agent contract offer and signed with the Red Sox weeks earlier.

I’ve never quite understood why Jays fans practically wanted a statue of A.A. erected in front of Rogers Centre after he swung the Wells deal. Certainly Wells’ expensive contract became onerous when he stopped being an elite player a year or two earlier, but why on earth do fans care how much money Rogers spends or saves? It makes no difference to me if a rich ownership conglomerate is able to be cost efficient. All I care about is if the team is any good and I’m pretty sure that acquiring Frank Francisco and Juan Rivera in exchange for Vernon Wells didn’t do a damn thing to make the Blue Jays better at any point. They just saved their owners money and left town soon afterward. Celebrating that is a bit like Winston Smith cheering because Big Brother found a great discounted rate on telescreens and microphones.

For New York fans, Steinbrenner was a great owner because they always knew that a few unfortunate sunk costs (think Hideki Irabu, Kei Igawa, Alex Rodriguez, et al) would never stop George from spending money on free agents like a drunken longshoreman in a cathouse until the Yankees won the World Series. Here’s an important note about the Yankees – they have won. Many, many times. They are the winningest franchise in baseball by a large measure. In 2011, the Blue Jays thought it was super keen to finish fourth in the division with an 81-81 record without spending too much money.

The second part of that trade that doesn’t reflect so well on Anthopolous is that immediately after sending Wells to the Angels for Mike Napoli, he immediately traded Napoli to the Rangers for reliever Frank Francisco. That hurts. Francisco pitched 50 middling innings during his one season in Toronto before being allowed to walk as a free agent the next winter. Napoli hit 54 home runs and was an 8 WAR player in two seasons for Texas. He also appeared in over 125 of those games as a catcher. Not like the 2011 or 2012 Toronto Blue Jays could have used any of those things, right? The fact that fans remember so fondly a trade where A.A. basically saved Rogers a lot of money to acquire two much shittier players says a lot about how much power and outreach the thought police of the Rogers media empire have. If for some stupid reason they ever did build Anthopolous a statue, the Napoli trade would be the big dollop of seagull poop that kept landing on its forehead. (And I even was nice enough to refrain from mentioning him drafting Chad Jenkins instead of Mike Trout in 2009.)

Tonight’s game did absolutely nothing to create any more memorable moments between these two teams. It was poorly played, started late and took a really long time to play. At one point around the 11th inning I became delirious and began hallucinating, dreaming I had a good game to watch. What I can remember is that Blue Jays call-up starter Mat Latos, on pace to play for all 30 MLB teams before he turns 32, made his Blue Jays debut and did little to help his chances of staying on the team for very long. He walked 3 and struck out just 1 in 5 laborious innings. Angels call-up starter Alex Meyer somehow managed to be worse, walking 4 and striking out 3 before leaving in the fourth inning. After that Yusmeiro Petit and Danny Barnes calmed things down for both teams in relief for a while, throwing 5 scoreless innings between them. Beyond that point, my memory is a bit foggy. A litany of mediocre pitchers threw a lot of drawn out, error-plagued innings to take this game well into the early morning.

Whatever the opposite of a pleasure to watch is, that’s what this game was. At several points I was certain I was literally the only person in this country stupid enough to still be watching it. A great baseball game can last 5 1/2 hours and I’m happy to watch every minute. This was not one of those games. Troy Tulowitzki left the game with his monthly injury and it featured all of the same frustratingly feeble offense that has been tearing at Blue Jays fans’ souls for the last few weeks. However, if you had some caffeine and a strong stomach and hung in there long enough…there may have also been a breakthrough moment. (in Jim Ross’ voice) “Mah God, that’s Jose Bautista’s music!!”

BASKING IN THE GLORY
(after each win, three things that might have made the difference)

A BIG MOMENT-  This one almost made it worth watching a terrible game that seemed to last a full season. In the 13th inning, with two out and nobody on, Kevin Pillar and Ezequiel Carrera both singled and then Jose Bautista launched a 403 foot bomb to centre on a curve ball from former Blue Jays pitcher Jesse Chavez for his first home run of the year. It may prove to be a watershed moment for Toronto. It might just prove that even a broken clock is right twice a day. The next few weeks will determine that. (Tonight’s game was tough on pitchers with sleeve-style arm tattoos like Latos and Chavez. You kids out there take note.)

A BIG PLAY-  In the bottom of the 13th, with the Jays defence having committed two errors and a passed ball (before even getting an out in the inning, FFS!!!) to bring the Angels within a run, Joe Biagini relieved Aaron Loup and then struck out Albert Pujols swinging with the bases loaded and just one out. Pujols in 2017 is not what he once was, but he remains one of the smartest players in the game and one of the most accomplished hitters in MLB history. For Biagini to induce him to strike out chasing a bad pitch when all he needed was a long fly ball to tie the game was very impressive. Weirdo Joe has been the Blue Jays’ most valuable relief pitcher this season. Of course, the pickings are slim. It’s a bit like saying “Scent of A Woman” is the best film of Chris O’Donnell’s career.

A LITTLE THING- It cost him a leg injury, but Tulowitzki advancing to third on a passed ball that squirted just 10 feet away from Angels catcher Martin Maldonado in the eighth inning allowed the Blue Jays to score two runs instead of just one on Justin Smoak’s double. There is no way Russell Martin would have scored from first on Smoak’s ball into the right field corner, but Tulowitzki’s hustle drew the throw and allowed Martin to advance to second base behind him.   It was a smart, aggressive play from a guy who is a slow runner but nonetheless seized the opportunity. This team has to do things like that because it clearly isn’t going to hit enough to win.  Maybe while Tulowitzki is sitting out with an injury for the umpteenth time in his career, someone will ‘accidentally’ leave a yoga DVD in his locker room stall.  You’re injury prone, nearly 33 years old, 6’3″ and 215 pounds, Troy. At some point if you want to keep being able to be healthy while playing shortstop every day in the Major Leagues you’re going to have to start doing things a bit differently.