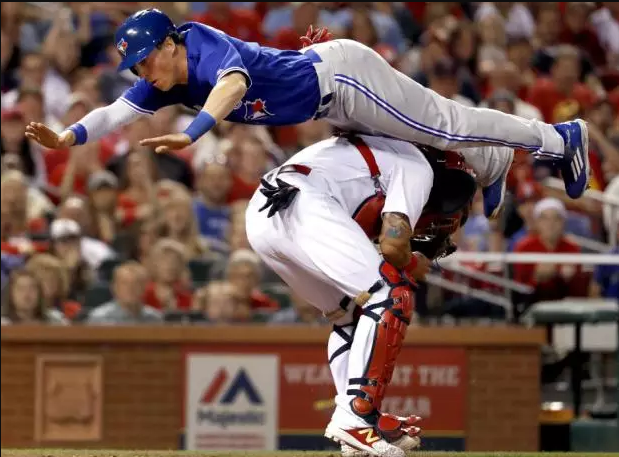 Despite the indisputable fact that interleague games are stupid and no one with any self-respect could possibly find them interesting, Toronto facing St. Louis tonight still had a few intriguing angles to it, though the teams would appear at first blush to share little history. Tonight’s game did have a bit of behind-the-scenes drama to it. At least, it seems like drama to people who spend too much free time thinking about this stuff. Ahem. An-eee-way….

This past offseason, it was no secret that the Blue Jays’ most coveted and aggressively pursued free agent player was outfielder Dexter Fowler. G.M. Ross Atkins and co. rightly determined that Fowler’s speed, switch-hitting, leadoff skills and infectious personality would be a perfect fit for this team. Ultimately he chose to sign a lucrative deal with St. Louis, with Toronto appearing to be close second choice. Fowler has started the season slowly, but even his ‘early struggles’ numbers would have boosted the Blue Jays’ fortunes so far in 2017. So when he led off the first inning with a double down the line, scored the game’s first run and later drove in the tying run vs. Roberto Osuna, it made his decision just a little harder to swallow.

In the 2012 MLB Draft, the Blue Jays selected high school outfielder D.J. Davis with the 17th overall pick, two picks before the Cardinals selected Texas A&M pitcher Michael Wacha, who many had predicted Toronto would select. Since that time Wacha has won 35 MLB games, been an All-Star and was the MVP of the 2013 NLCS. Davis is no longer a prospect, currently batting .214 as a 22 year-old in the Florida State League. Wacha has had health issues the last season or two but few things help a pitcher feel good again quite like having this Jays lineup come to town, am I right? (By the way, the player chosen after Davis and before Wacha? Current Dodgers shortstop, 2016 Rookie of the Year and MVP runner-up Corey Seager. Ouch. That pick might have made the now burdensome Tulowitzki contract/trade unnecessary, wouldn’t it?). Sometime soon, I’ll do a ‘draft could have been’ column that will be really upsetting; something else to depress readers even more during this singularly suck-filled season!!

Here’s something that irks me but really shouldn’t: current Cardinals manager and former catcher Mike Matheny played one forgettable season in Toronto in 1999 at age 28. The next year he signed with St.Louis and went on to win four Gold Glove Awards there after never winning one before in his career. The Blue Jays have never had a catcher win a Gold Glove and truthfully haven’t really threatened for one, either. ( I suppose Charlie O’Brien could have been a candidate if he’d played a little more frequently.)

Noticing a trend here? So far, a lot of the ‘history’ between these two teams seems to favour the team wearing red. Although the Cardinals did sign longtime Jays lefty Brett Cecil to an irresponsible free agent contract this winter and he’s off to his usual awful start to the season, so that evens things out a bit.

BASKING IN THE GLORY
(after each win, three things that helped make the difference)

A BIG MOMENT- Anyone who says they felt good about seeing Marcus Stroman put on a batting helmet in the top of the 11th inning is revising their story after the fact. At that point, the Blue Jays were out of pinch-hitters and so Stroman (who had also been a middle infielder at Duke University) was pinch-hitting for Jason Grilli second in the inning. It felt a little like a form of surrender and that the Jays were eventually going to lose yet another war of attrition, having already used up their better bullpen arms in this game as well. Stroman, however, proved the doubters wrong as he so often does, stroking a two-strike double down the left field line with one out. He then scored the game-winning run two batters later on the Cardinals’ fourth error of the game. The Blue Jays have been due some good fortune and they received it today, fully gift wrapped from the St. Louis fielders. Stroman’s double was the first pinch hit by a pitcher in Toronto Blue Jays history and the Cardinals’ shoddy defence made it count.

A BIG PLAY- In the top of the seventh, Chris Coghlan attempted to score from first on Kevin Pillar’s triple down into the right field corner. After rounding second like Mr. Magoo, he was going to be out at the plate by twelve feet, but at the last moment he leapfrogged over catcher Yadier Molina and completed a 360 degree front roll, tapping the plate as he came down without ever being tagged. That run gave the Jays the first of two late-inning leads they blew in this game (that’s right, sports fans – TWO blown saves before extra innings had even started), but it was easily the most unique play of this young Jays season and one of the best tag-avoiding home plate arrivals I have ever seen.

AND A LITTLE THING- In the fourth inning, Ezequiel Carrera miraculously managed to score the Jays’ first run when he should have been out four different times. #1 – Leading off the inning, he was thrown four consecutive strikes by Wacha and somehow home plate umpire Quinn Wolcott called only half of them properly. He then weakly hit the fifth pitch (also a strike) to first where (#2) first baseman Matt Adams misplayed it. It was scored an infield hit, but Adams was playing his first game at first this season and looked rusty. It was a play that an MLB fielder should have made comfortably. Then, (#3) when Jose Bautista singled to right field, Carrera foolishly took off to third base where he would have been thrown out but Stephen Piscotty’s throw hit him as he was going into his slide and rolled away. (A big, basic base running rule is to never make the first out at third base, kids. Ever.) (#4) Not satisfied to have cheated death three times already, Carrera instinctively got up after the ball bounced away after hitting him and headed home without finding the ball (another base running faux pas). He would have then been thrown out at the plate but the ball just managed to roll away from Wacha and into the dugout, meaning he automatically was awarded home. Reports from the clubhouse said that Carrera left quickly after the game to buy a few tickets for the Missouri Powerball Lottery draw on Friday night.

I wasn’t keen on Jarrod Saltamacchia being given the “green light” with a runner at first, one out and a 3-0 count. He has looked lost at the plate so far, and with Wacha temporarily struggling to find the plate, not having him try to work a walk to put a runner in scoring position in a 2-1 game seemed like misplaced aggressiveness. The fact that he fouled out on a cookie down the middle is besides the point.

How terrible has this season been for the Blue Jays when broadcasting legend Pat Tabler, trying to talk up Darwin Barney’s offensive contributions, excitedly notes that Barney has “already got 4 RBIs this season” – in his team’s 20th game?

Who are these people in t.v. commercials who sit with all four of them jammed onto the same tiny couch to watch a game, all wearing pristine Jays gear, who then all simultaneously leap to their feet at the same time, raising their hands above their heads together in response to a “great play”? I’ve watched a lot of games in a group dynamic with both men and women and I’ve never seen any of those things transpire even once. Anyone who did those things likely wouldn’t be invited back, especially if they brought Budweiser.

The Jays were 1 for 13 with runners in scoring position tonight. It took 4 St. Louis errors and some other dumb plays (third baseman Jedd Gyorko twice allowed a runner to score from third on a ground ball to him) and two extra innings to win this game tonight. That doesn’t feel like a ‘breakout’ game just yet, does it? This team could use a 9-2 laugher and soon.

I don’t understand how or why Michael Wacha was charged with two earned runs tonight when a throwing error (the Carrera base running debacle at third) in the fourth inning was the main reason the Jays were able to scratch across the only runs he ‘allowed’.