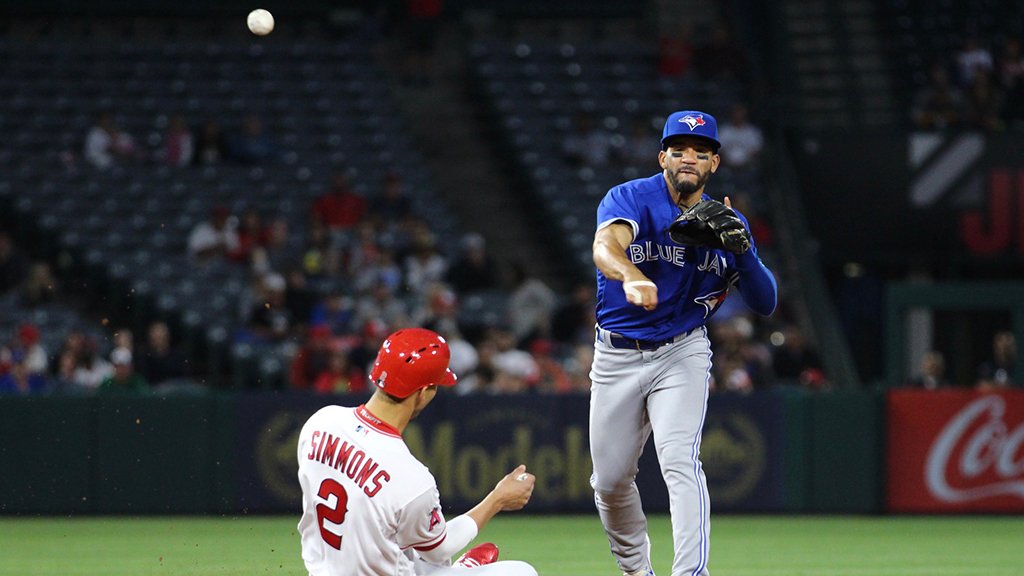 On Friday I wrote about how little rivalry there has been between the Angels and Blue Jays over the years. That got me thinking “how would you rank all the teams in the American League as far as rivalries with the Jays go”? I think one of the big selling points of this blog will be me asking myself questions no one else really cares about and then writing about them for extended periods of time. It’s really a license to print money.

Below is my ranking of the Blue Jays’ American League Rivalries, taking both history and current intensity into account.

14. Houston Astros
The Astros only joined the A.L. in 2013. I literally cannot recall one game they’ve played against each other.

13. Anaheim Angels
After this series the two teams are tied with 205 wins vs. one another each. That is the end of interesting anecdotes about this series. They once did Toronto the favour of trading Devon White for Junior Felix. That was pleasant. I’m just remembering now that Donaldson had some specific sexual instructions for Angels hitting coach Mickey Hatcher last year. After Pujols’ feelings were hurt yesterday, maybe we should bump them up to 12th.

12. Seattle Mariners
Seattle and Toronto both joined the A.L. as expansion teams in 1977. The Blue Jays have won two World Series since then but Mariners fans got to watch Ken Griffey Jr. in his prime for a decade. Seattle almost traded Randy Johnson to Toronto in ’93. That would have made things a little more interesting.

11. Tampa Bay Rays
Playing them more frequently than a lot of other teams doesn’t make those games more interesting. Games in Tampa feel like they’re being played down an abandoned well. Carlos Delgado did hit four home runs in a game against the (Devil) Rays once, though.

10. Minnesota Twins
The only reason this one cracks the Top Ten would be the 1991 ALCS, which Minnesota won in 5 games. In 1987 Twins won the World Series. The Jays were 9-3 vs. the Twinkies that year but blew their chance to face them in the ALCS when they collapsed in the week’s final season and failed to clinch the East.

9. Chicago White Sox
They were the Blue Jays’ opponents in that famous first game in April 1977 at a snowy Exhibition Stadium. They lost the 1993 ALCS to Toronto in 6 games. They are also the team that ripped Jays GM Gord Ash off by trading Mike Sirotka for David Wells in 2001. Hey, maybe they should be higher.

8. Cleveland Indians
Last year’s ALCS was their first postseason meeting. In the 80’s they stunk and when they got good in the mid/late-90’s the Jays were just beginning a 20 year slump. Dave Stieb threw Toronto’s only no-hitter vs. Cleveland in 1990. Len Barker threw the tenth perfect game in MLB history vs. the Jays in May of 1981.

7. New York Yankees
I know, I know. You hate them, but what are the great moments vs. the Yankees? Winfield killing a seagull? Late last year there was some bench-clearing stuff when J.A. Happ and Luis Severino were throwing at guys. Vernon Wells hit a walk-off homer vs. Mariano Rivera once. Ooooh, and I was there when Jays catcher Ken Huckaby separated Derek Jeter’s shoulder on Opening Day of the 2003 season. Those were good times.

6. Boston Red Sox
Same thing here. They’ve never faced them or the Yankees in a playoff game. Roger Clemens signing in Toronto back in ’96 made their games those seasons pretty contentious and fun. Also the biggest comeback in Jays history was on June 4, 1989 when they rallied from a 10-0 deficit at Fenway to beat Boston 13-11. Plus their current manager John Assface was traded there from Toronto after he said being Red Sox manager was his ‘dream job’ while still managing the Blue Jays. Dick. I guess George Bell karate kicking Sox pitcher Bruce Kison back in 1985 was pretty cool.

5. Oakland A’s
The 1989 ALCS vs. Oakland was a humiliation. The 1992 ALCS vs.Oakland was perhaps the turning point in Toronto Blue Jays history, symbolized by Roberto Alomar’s home run vs. Dennis Eckersley in Game 4. Dave Stewart threw a no-hitter vs. Toronto in June 1990 while pitching for the A’s. Some players who played for both teams: Dave Stewart, Shannon Stewart, Jose Canseco, Rickey Henderson, Billy Koch, Tony Phillips, Mike Bordick, Josh Donaldson.

4. Kansas City Royals
The only team to knock the Jays from the playoffs twice. Their comeback from a 3-1 deficit to win the 1985 ALCS is likely the worst playoff moment(s) in Blue Jays history. In the 2015 ALCS the Jays made about 10 little mistakes and the Royals did everything right to beat a more talented Toronto team in 6 games.

3. Baltimore Orioles
Currently the second-testiest Blue Jays rivalry. Adam Jones, Chris Davis and the O’s bullpen clearly dislike a few Toronto players and the feeling seems to be mutual. On September 17, 1987 the Blue Jays set an MLB record by hitting 10 home runs in a 9 inning game vs. Baltimore at Exhibition Stadium. The Jays also narrowly edged Baltimore to win the 1989 AL East. Oh and Jose Bautista injured his arm by throwing the ball too hard trying to get Delmon Young out at first base from right field a few years ago. You don’t do that against opponents you’re indifferent about. Their games always feel about one minute from the benches clearing.

2. Detroit Tigers
Kind of cooled these days but these two teams’ geographic proximity made this rivalry sizzle during the 1980’s when they were both in the AL East. The final week of the 1987 regular season featured some of the most intense, anxious games played in Blue Jays history. Tigers outfielder Larry Herndon will forever be etched in Jays fans’ nightmares for his wall-scraping solo home run on the final game of that season that completed Toronto’s collapse.

1. Texas Rangers
The amazing thing is that 2 1/2 years ago, this rivalry wouldn’t have cracked the top ten. Nolan Ryan throwing his 7th and final no hitter vs. Toronto in 1991 would have been their most memorable moment. However, two contentious, fiery ALDSes in the last two years and a punch thrown last May by a certain cro-magnon second baseman have made every game between these two like a prize fight. Rangers manager Jeff Banister complaining about bat flips and then grandstanding like he’s Bobby “the Brain” Heenan doesn’t help calm things down. The Jays also donated 7 time All-Star Michael Young to Texas in a horrendous 2000 trade for 1 1/2 seasons of the infuriating Esteban Loaiza. That painful trade is probably what prompted Bautista to flip his bat in that glorious moment back in 2015.

Tonight’s game did nothing to make Angels games any less historically noteworthy. I spent most of it trying to find other words for ineptitude. Here are a few good ones I found: cloddishness, artlessness, ungainliness. Pick one or two of them – I guarantee you could find examples of it throughout. John Gibbons was ejected for the second consecutive game, apparently for making eye contact from the dugout with home plate umpire Toby Basner, who was clearly feeling a bit defensive because he was having a terrible night. He gave Angels starter Jesse Chavez a strike zone so big it was like he was Tom Glavine in 1995, getting strikes called on pitches that were either low or away – or sometimes both. Francisco Liriano struggled with command a bit tonight, but Basner’s inconsistency didn’t do him any favours. Then, Basner ludicrously called Devon Travis out for catcher’s interference on his swing followthrough. Travis made no contact with Anaheim catcher Martin Maldonado with his body and his feet never left the batters’ box until after the ball was released. He only called Travis out after Maldonado pleaded for him to do so. Chris Coghlan would have easily been safe at second base on the play either way. It was an auspiciously awful night of officiating behind the plate. When an umpire gets discussed more than anything else in a game, that umpire has done a poor job. Also you probably have a shitty team.  Nonetheless, the Blue Jays still managed to score just one run vs. a pretty pedestrian pitcher over six innings and have two more base runners thrown out stupidly. None of that was the umpire’s fault.

COULDA, SHOULDA, WOULDA
(after each loss, three things that might have made a difference)

It appeared that Liriano COULDA done a much better job of holding Cameron Maybin on first base in the fifth inning. There really isn’t a reasonable excuse for a base runner getting jumps that good off of a left-handed pitcher. In a tie game, Liriano has to know that Maybin might try to steal and he neither threw over to the base nor altered his timing to the plate and Maybin was able to time him perfectly. Even with a high pitch and good throw from Russell Martin, he was safe and later scored the winning run. The more you see him, the more you realize that little things like that which keep Liriano from being a great pitcher.

Its great that Kevin Pillar is becoming a more disciplined hitter. He looks more selective and might soon have his offensive level nearly match his elite glovework. But Gibbons SHOULDA held off on the hit-and-run after he led the game off with a five pitch walk. Chavez was having trouble throwing strikes early, which is a strange situation to hit and run – almost like they decided before the game to do it. It forced Ezequiel Carrera to swing (and miss) at an 0-1 pitch well out of the zone and Pillar is now just 2-for-5 in stolen base attempts this season. Being an effective base stealer requires a success rate of 80%. He and his manager are going have to pick their spots better if they want to make his increased on-base percentage matter much.

If Devon Travis WOULDA made a better throw home on a ground ball hit right to him in the fifth, Maybin doesn’t score the winning run. With the infield in, runners at second and third and one out, Liriano induced Yunel Escobar to hit a ground ball right at Travis, who then rushed his throw unnecessarily and bounced it, forcing Martin to make an awkward catch and allowing Maybin to slide in under him. Even if the throw is just decent, Maybin is out and the game has a different ending. Travis’ defensive shortcomings continue to be a recurring problem for this team. I’m pretty sure the Blue Jays would have somehow figured out how to lose the game anyway by stringing together nineteen consecutive failed bunt attempts, but it would have at least been a different example of incapacity than we’ve seen so far this season.