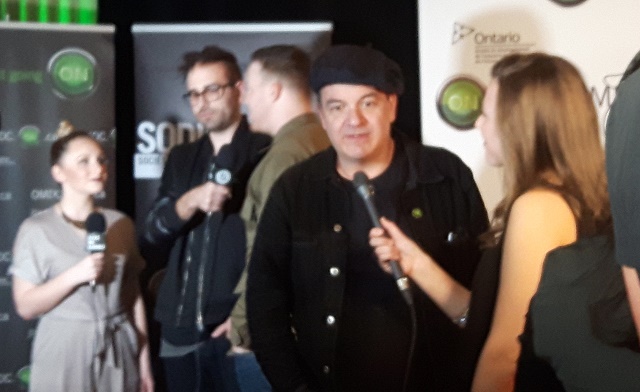 Ontario at the JUNOs

It being the 150th birthday of the province of Ontario, it seemed only right that the OMDC – Ontario Music Development Corporation – put on a splashy reception for JUNO nominees based in the province. The dignitaries came out and speeches were made while the wine flowed and sliders and those mini quiches circulated while a sizeable crowd mingled.

The red carpet was hot with stars, publicists, photographers and media doing on the spot interviews. Sure it was a PR event for Ontario’s music funding agency, but the stellar attendance did highlight the depth of talent in the province.

The OMDC awards grants to music artists and music companies with the goal of supporting the music industry as a whole. Nowadays, musicians make most of their money by touring, yet touring is also prohibitively expensive, and as shows and venues get bigger, so do costs. Max Kerman of the Arkells explains, in a media release, “We’ve typically played in rock and roll clubs. OMF funding let us bring our shows to venues like Massey Hall and First Ontario Centre.”

The important thing is, the music biz gives back. Underneath the red carpet glamour, between live music venues, concert halls, the recording industry, festivals, and all the spin-off business, including tourist spending, it’s an industry that generates money and jobs.