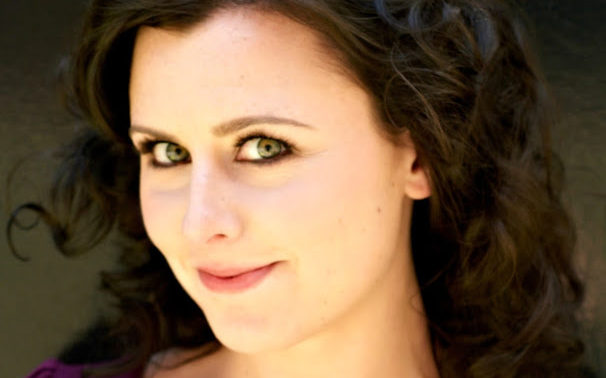 A 2015 MyTheatre Award nominee for her outstanding performance as Arthur Roeder in Flat Earth Theatre’s Radium Girls, Bridgett Hayes is a standout actress in the Boston community. We caught up with her to look back on her best work thus far, discussing along the way what it’s like to be an empathetic child, how theatre can inform discussions of global injustice, and how it feels to step outside your performance comfort zone.

You are an actor, a designer, a playwright, and a dramaturg. What drew you to the theater?
My mom started taking me to the Delaware Children’s Theatre when I was five years old. One of the first productions I remember seeing was Charlotte’s Web; she had to carry me out of the theatre because I was sobbing so hard over Charlotte’s death. The director followed us into the hallway — probably to ensure I wasn’t totally traumatized — and my mother explained that I had always been very sensitive and empathetic. The director then said, “She needs to be on the stage!” I guess that’s always stuck with me. I auditioned and was cast in my first play at age eight and have been doing theatre ever since.

The first time I saw you onstage, you were warning your husband not to go to work on the Ides of March (in Bridge Repertory Theatre’s Julius Caesar). You were nominated for a MyTheatre Award this year for your role as Arthur Roeder, in charge of the U.S. Radium Corporation, in Radium Girls. To say you have range is clearly an understatement. What compels you to audition for a given role?
There are three criteria I look for: the play has to have a good story, a well-written script, and a character I can get behind and understand their point of view. Other than that, I try to chose roles that are diverse. I’ve always considered myself a character actor – I love doing accents, creating unique voices and physicality, and playing interesting and unusual characters. That being said, I am particularly drawn to characters who have a good arch, ones that change throughout the course of the play and have some type of self-realization – that’s the most fun. Oh, and if the character is the villain. I love creating a sympathetic villain.

What was it like to play Arthur Roeder?
Cathartic. To be honest, I was a little self-conscious stepping into the role. I had never played a man before, and I was nervous that I wouldn’t be able to do the character justice. However, Lindsay Eagle, the director, was so positive, so encouraging and confidant that she had cast the right person that any reservations I had were soon quelled. In her vision for the play, the actresses playing men weren’t intended to convincingly come across as male. Rather, this production was an experiment to see what would happen if we gave a female perspective to this otherwise male-dominated corporate landscape. What resulted, for me at least, was a deeper understanding of the pressure Roeder feels to be successful, especially having forsook his father’s will for him to go into the ministry, and the guilt and remorse he suffers when he finally recognizes that he chose making a profit over valuing human life.

What sort of discussions do you think shows like Radium Girls can trigger in contemporary audiences?
One of the utmost reasons I was drawn to Radium Girls is because the story is every bit as relevant today as it was back in 1917, when these female factory workers fought for their voice to be heard and for the U.S. Radium Corporation to take responsibility for their actions. It’s 2016 and yet every day there is news of corporations polluting, poisoning, or causing some ethically reprehensible damage and refusing to own up (and pay up). Even though the U.S. government has enacted numerous laws to protect workers from unsafe working conditions, most industries have gone overseas to countries with cheap labor and lax labor laws. Women in poverty are overwhelming the victims most affected by corporations’ rapacious practices. I recently watched an excellent documentary, The True Cost, about the pernicious nature of our fashion industry, which produces cheap, fast clothing but at the cost of extreme environmental destruction and endangering workers’ health. This is very much a conversation that will continue in our world until governments impose more restrictions on free-market capitalism.

You had me in stitches with your role as Dora in Company One and ArtsEmerson’s production of An Octoroon. That show was one of the most impressive theatrical productions I’ve seen in a while. Can you describe the experience?
Thank you, Fabiana, that show has a special place in my heart and I’m glad you enjoyed it because it was a blast to act! Ever since Company One announced their season last year, I knew that I just had to be a part of An Octoroon. Why was I drawn to this piece? Well, first off, the structure of the play itself pushes the envelope, and the use of so many theatrical devices and elements is incredibly exciting. And I think it’s important that Boston produce more experimental theatre, theatre that is accessible to young audiences, and theatre that poses questions that aren’t always immediately answerable. Everyone involved in this production put in an incredible amount of work – it is a long and physically exhausting play – and I think that was evident from our production. But throughout the rehearsal process, we really just played around. There was a lot of silliness and a lot of giggling, and a lot of trying to keep a straight face while acting.  The characters in this play are so outlandish, and because the melodramatic style is so far from what we are accustomed to seeing in theatre nowadays, it was really fun to see how far we could take the characters while still ultimately telling a poignant story about race in America.

What’s next for Bridgette Hayes?
Glad you asked! I have a lot of exciting projects coming up. In August, I’ll be performing in Dog Paddle, a Bridge Rep production going up at Central Square Theatre. I’m also on the Stage Source Gender Parity Task Force, and we are currently examining data that shows if and how New England area universities offer equal opportunity in the theatre to female identifiers and minorities. I’m also going to be teaching a course on dramatic literature for the first time this summer at Boston University’s Summer Theatre Institute (wish me luck!).