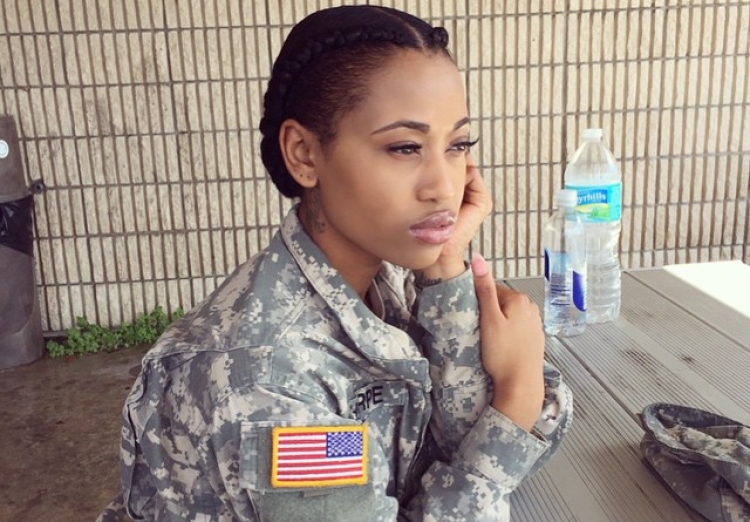 The preview for last night’s episode of The Bachelor forecasted an epic breakdown by one of those contestants who stands out early but ultimately isn’t that likely to win (the real frontrunners are Lauren B and Caila, though Catherine-esque surprises do happen). The promo showed the lady in question running away and crying, suggesting nothing more or less than “bitch be crazy”. This was Jubilee, and that was not what happened.

Jubilee Sharpe is a bold, beautiful, awkward, introverted, uncompromising Haitian orphan with a risky sense of humour who fought in Afghanistan then somehow ended up on The Bachelor. 26-year-old Ben being far too young to be the Bachelor, his cast is about 23-years-old on average and you can tell. Lovely as some of them are, they’re a particularly immature bunch (it’s episode three and they’ve already aligned against three different girls), most of whom are fairly interchangeable and have the collective life experience of an eggplant. Jubilee is 24, still too young to be on a show with a husband-finding premise in my opinion, but she feels like a grownup in a way that the others just don’t. Not because she’s more put together or practical (I suppose Becca has the market cornered there), it’s just that Jubilee’s lived enough to know that she’s just plain not interested in the other girls’ shit. She’s exactly what the show needed this season.

I like Ben. Ben’s whole thing is that you’d have to be crazy not to like Ben (we’ve finally stopped calling him “Ben H” so now he can officially usurp the terrible Ben Flajnik as “Bachelor Ben”). He’s tall, handsome, smart, sweet and nice. Mostly nice. He’s kind of ridiculously nice. Like, he kept Lace after she yelled at him about not making enough eye contact nice. He brought little tokens of appreciation for, not just his frontrunners, most of the women at the second cocktail party. I’m going to guess that Ben accidentally breaks more hearts than most Bachelors simply because he seems really invested in making each girl feel special. If we learned anything from the terrifying rage of Shawn Booth last season, it’s that making people feel like the only one in the room can backfire when they figure out that they’re not. Of course, if you’re a regular reader, you know I’m a little suspicious of that kind of overwhelming nice-ness. I start to think about the nightmare that was AshLee Frazier and camera awareness and worry that Ben seems so almost cartoonishly great not because he’s some crazy unicorn of a human being but because we actually just aren’t really seeing him.

Ben’s date with Lauren B this week was cute and you can tell he’s really into her but the only time I felt like I was watching real humans was the post-credits sequence when they started laughing (and talking to producers!) about the mysterious fart bubbles that interrupted their kiss.

In contrast, the entire time he was with Jubilee, I felt like we could see Ben. Her ill-timed humour, visible discomfort and ballsy self-revelation tear down his perfect walls just a little bit and you can see how much confidence it gives him when he sees her finally relax. Ben’s at his most likeable when he’s a little embarrassed so it was the moment when Jubilee made him turn bright red in the hot tub that I decided I was all-in on this otherwise kind of irritating season (irritating because this batch of girls is pretty dreadful; Ben’s actually the only non-Sean lead I’ve ever really liked). She was the only girl who never once mentioned “getting time” during that embarrassment of a cocktail party in which even the best of the other women managed to make the loss of Ben’s family friends into an opportunity for advancement in the competition. Was the massage bit an awkward idea? Yes. But Ben’s love of massages was clearly something they’d talked about and I honestly don’t think for a second that Jubilee was doing it for any reason other than she knew that about him and she wanted to get his mind off his terrible day.

I always have issues with the women who use their camera time to talk about the other women. Or, rather, the women who talk about other women to get more camera time. Olivia aside (cause that girl is ridiculous), I’m usually on the side of the person everyone unites against. As Caila (one of the sane ones) so aptly identified, what the girls were trying to do with the “conversation” they wanted to have with Jubilee was not talk to her, it was attack her. So of course she freaked out, and here is where ABC got the footage for their out-of-context promo. What the preview didn’t show us was Ben by her side, barely giving Amber the time of day. Because even though the narrative on this show is always that the girls see someone’s “true self” more than the lead, I often just don’t think that’s true. She opens up to him (possibly because he’s actively trying to get to know her instead of, by the very nature of the show, constantly competing with her) and he gets her; badly timed jokes and all. I believe Ben when he says (my favourite quote on this show in a very long time) “I know who she is and I like the person I know”.

Amber, however, is the absolute worst kind of Bachelor contestant. Someone forgettable who can’t live with being forgettable so she keeps imposing herself on the franchise. I see absolutely no reason why Amber would think she, specifically, could connect with Ben more than she did with Chris (or Dan or whomever else she tried to shack up with in Bachelor in Paradise); this is not a Kacie B/Sean situation (that poor girl was just in the wrong season). Amber wants to be the Bachelorette (and you get the feeling the producers are on her side, their public relations team desperate for an African American lead after they squandered the gift that was Marquel a few years back). She’s in this for the screentime, not the guy, and stunts like confronting Jubilee over something as stupid as a joke about passing off her date because she’s scared of the helicopter are perfect examples. Amber gives the producers whatever they want because she wants them to keep bringing her back. Girls like that are the true villains of the Bachelor franchise, mostly because they are never the “villains”. Olivia knows what role she’s playing and she’s having some fun with it. But Amber, she thinks she’s the hero and that, if she keeps at it, the audience will eventually love her and make her the Bachelorette. It’s never going to happen, Amber. Go home.

I’m not saying that Jubilee is the best choice for Ben. Nor am I saying that she should be the new Bachelorette (I honestly don’t love any of these girls for that spot yet). I’m just saying I’m really glad she’s on this season. She’s cool and weird and human in a way Bachelor contestants rarely are and she makes me like Ben more, which is saying something. I wish the other girls (and the promo department!) would stop calling her crazy. I think its them that are crazy but, whatever, live and let “love”.

Unrelated Thoughts:
– I was sad to see Jami go; I was really starting to like her. That self-deprecating exit interview hurt my heart.
– I had high hopes for Jojo but she was a little too mean in this episode. Still salvageable but she definitely went down a few pegs. Lauren H is out for good in my books.
– I’m a little bit shocked that I’m saying this but I think I’m starting to like the twins. It remains to be seen but I’m convincing myself to stop judging them because their job description is just “twin”.
– I still miss the chicken girl! I loved the chicken girl.