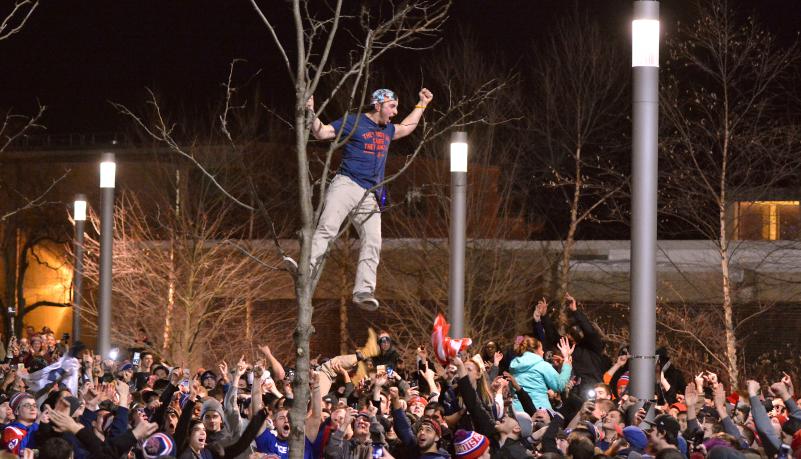 When is a Riot Not a Riot?

The Patriots won
And people took to the streets
Filling the night with cheers and open containers
And I was there
Watching and yelling though I had no allegiance
Except to my friends who had been waiting for this for years
So I joined them in revelry
Caught up in the oneness of the crowd
I screamed “Patriots!” till my throat was sore
And when the chant turned to”USA!”
I echoed back surpised at the strength of my voice
Even more surprised when someone started a fire
Then another
And a boy from my creative writing class
A quiet thoughtful kid
I think his name was Wyatt
Ripped off his shirt and jumped over one of those fires
While a pasty man climbed somehow onto the McDonald’s awning
And the crowd roared as he postured and started a new chant:
“Show your tits!”
Two students started pushing each other almost hitting a woman
And the McDonald’s man moved to dislodge the golden arches on the roof
As the crowd yelled “Show your tits!”
They began to move so erratically that someone fell to the pavement
Somewhere a plate glass window broke just out of sight
And the crowd had thrown a rope up to the roof of the McDonald’s
And the man there had tied it sloppily to the dip in the arches
But it somehow held as the crowd pulled backwards
Everyone staggering
A man punched another man
And a woman yelling
Wyatt bleeding from the head
While the man on the McDonald’s awning
Pushed the almost severed arches
And the chant shifted to “Fuck The Yankees”
As young men began to jump on any car with New York plates
And I remember not one police officer
Not one
As a team of hands
Mostly white hands
Worked together to try to push a public bus
Onto its side
We heard a faint explosion in the distance
So we decided to go home