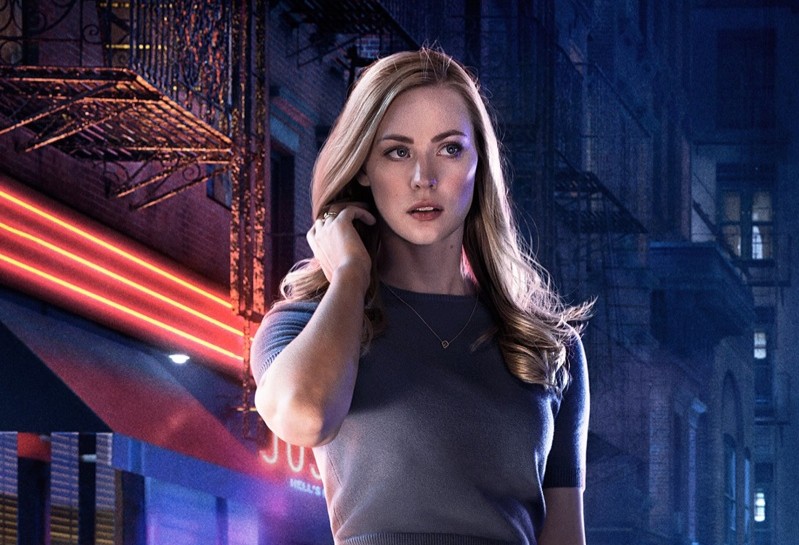 Daredevil made his comic book debut in 1964. As with most superheroes that have been around that long, he’s gone through his fair share of being reinvented and reimagined. As times have changed, his supporting cast has also evolved. On April 10th, Netflix released their new 13-episode original series based on the characters created by Stan Lee and Bill Everett. I had prepared myself for an on-demand television viewing marathon by reading Daredevil: The Man Without Fear, written by Frank Miller and drawn by John Romita Jr., which is a very thorough introduction to the main characters of the series and their world. I supplemented that with Daredevil: Yellow, written by Jeph Loeb and drawn by Tim Sale, which also covers the character’s origin, but puts a special emphasis on the romantic relationship between Matt Murdock (Daredevil’s secret identity) and Karen Page, the administrative assistant at the small law practice Matt has with his longtime friend Franklin “Foggy” Nelson.

I’ve been spending more time reading comic books than watching TV over the last few months. I cancelled my cable subscription late last year, but joined Netflix specifically to watch Daredevil. The show did not disappoint. After making my accelerated way through the series (which I’m looking forward to re-watching at a more leisurely pace), I had an opportunity to speak with Deborah Ann Woll, the actor who plays Karen Page.

While Karen’s first meeting with Matt and Foggy in the comic books has usually been a lighthearted one, the Netflix series makes Karen the first client of Nelson & Murdock. And, though the trouble in which she finds herself at the beginning dissipates, it sets her on a search for answers – a quest for justice that parallels Matt’s in his masked persona. But, while his adversaries continually point out his naiveté, Karen’s approach, though it may be green, seems to focus more on reasonable, methodical steps and she seeks assistance from people like Ben Urich, an investigative newspaper reporter. I asked Deborah to speak to the parallel paths:

“I think both of them will find the truth, whatever the cost. If it means physical harm, if it means putting yourself in dangerous situations, they will stop at nothing. They cannot abide corruption or people being taken advantage of. Matt might do that with his fists, but Karen will do it with her wits. And, certainly, the people with more experience – like a Ben Urich – are gonna tell her, ‘Well, that was a dangerous way to do it,’ or ‘You’re gonna get yourself killed,’ or something like that. And I like that Karen’s like ‘I don’t care. I just don’t care. I can’t let this continue.’ And to me that makes her very brave. And possibly naive, but she’s gonna get there at all costs.”

The ensemble cast does some truly remarkable work. Despite the fact that shooting concluded months and months ago, I couldn’t resist asking Deborah about one of my favourite moments, which comes near the end of the series finale. I didn’t mean to put her on the spot, but, having the opportunity, I just couldn’t resist asking. Being a theatre guy, I often delight in great facial shifts – the wordless muscular minutiae that are most effective for actors who perform into a camera. Those moments have me rewinding and replaying like a sports commentator. It truly is the craft at its finest. Here’s what she had to say:

“Karen is hiding a ton and if she’s looking across at someone that she cares deeply about – someone that she wants to be able to share everything with and she can’t – to me, in that moment, there’s a mix of understanding: ‘Both of us know that you can’t come back from certain things. Both of us have had to do things that will irrevocably change our lives.’ But I think also a moment of hope for the future: ‘Can there be a future? Can we move on? Can we be together?’ To me, acting moments that are rich are ones where you play the opposite of something at the same time you play the same thing. When you can believe simultaneously that things are never going to get better and hope that they will. That’s kind of what was playing for me, I think.”

In preparing for my conversation with Deborah, I learned that she was born in raised in New York City (Brooklyn, to be precise). So many TV shows and movies are set in New York and one can’t escape clichés about the city ‘being another character’ in the stories set there. So much of Daredevil’s story, in the comics and the series, is tied to the Hell’s Kitchen neighbourhood of Manhattan and I wondered about the ways in which being from New York and shooting in New York informed her performance. She responded:

“I think when people say ‘New York is a character in the story’… a better way to say it would be that New York has character. There are a lot of cities that don’t have a specific identity… New York has an identity. And sometimes, when you shoot in Toronto for New York, you forget the New York identity. So, it was a very nice reminder that every day that I lived in New York while I was shooting there… and I got yelled at or I almost got run over or it smelled like horse manure or garbage… or I had an amazing experience where someone sang to me in the subway… all of the myriad of experiences that you can have in New York, that every time something happened to me, Deborah Ann Woll, I was reminded that Karen lived in that vibrant world. I wasn’t staying at a hotel, y’know, I was staying with my parents. It’s this reminder of the vibrancy of that city. And it’s easy to forget that when you’re shooting in a backlot in L.A. or in a city that’s standing-in for New York. It was a helpful thing to shoot there.”

After admiring her work and experiencing her supremely pleasant manner in answering the questions of a comic-addicted theatre dude attending his very first press junket, it’s hard not to call myself a Deborah Ann Woll fan. As someone who hasn’t watched a minute of True Blood, I’m glad I have that to tie me over until the second season of Daredevil. The first season does so much so very well that one can’t help but get excited for all of the upcoming Netflix/Marvel co-productions.