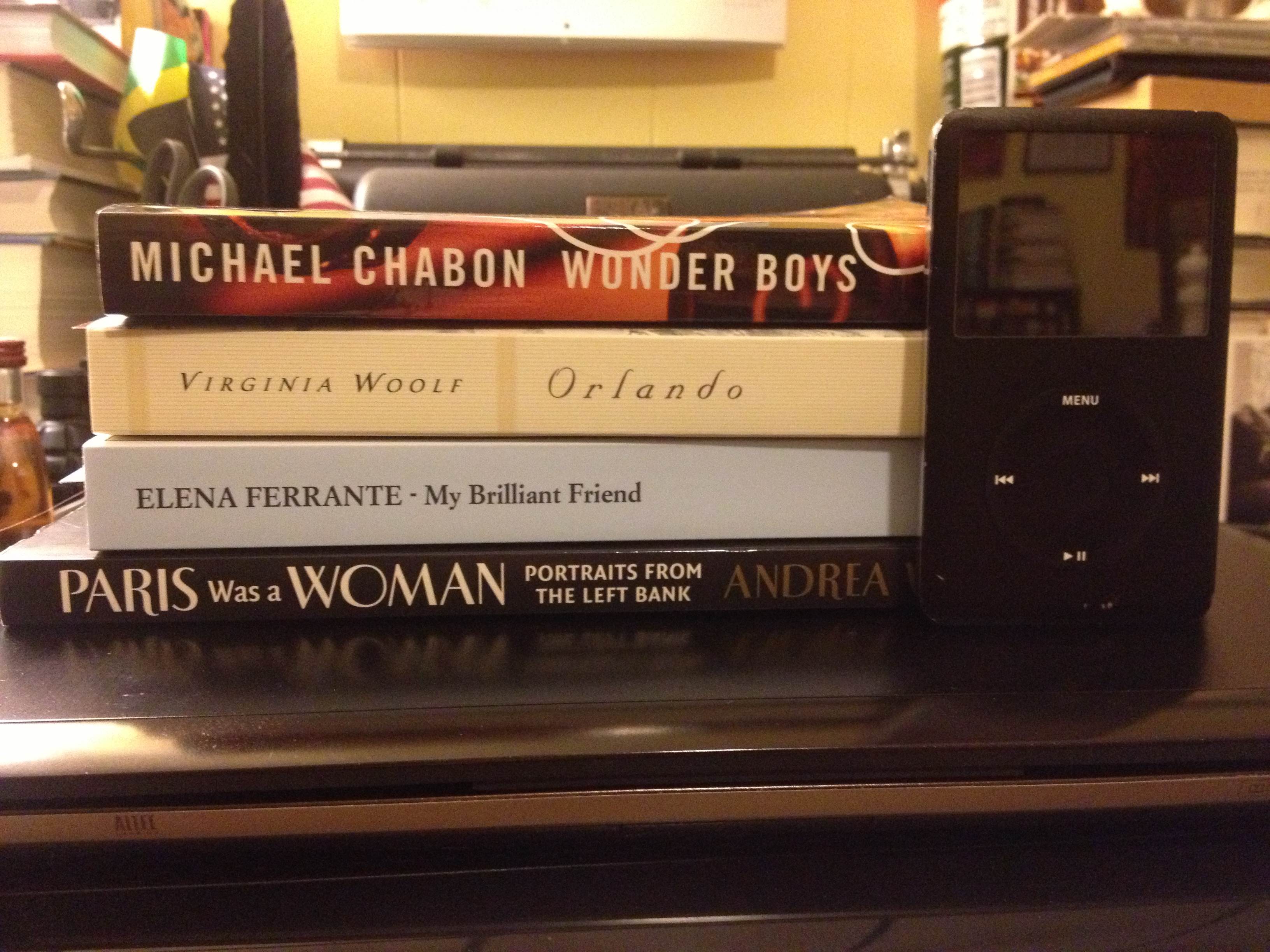 This month finds me criss-crossing all kinds of literary terrain. Old novels, new(ish) novels, an audiobook, and a bonus extra; there’s plenty here to keep us busy.

Michael Chabon’s Wonder Boys
I’m a Michael Chabon virgin (so much shame), and I figured I would eventually pop that cherry by reading Telegraph Avenue, or The Amazing Adventures of Kavalier & Clay. Instead, I dove in with Wonder Boys.

I was intrigued about the book after listening to an anecdote on the Slate Culture Gabfest about how the book came into being. Following the huge critical success of his first book, The Mysteries of Pittsburgh, the young Chabon felt pressured to write a “large masterpiece.” He labored for years on the ill-fated novel Fountain City, intensely afraid of dropping the book in the face of public expectations, a divorce, and the whittling away of a considerable advance.

He finally bit the bullet and abandoned the 1,500 page monster, instead choosing to write Wonder Boys. The novel is about a writer unable to abandon his own interminable fourth book, and how his life tangles with that of a young, troubled student equally mired in literary doom-and-gloom. Super fun.

Virginia Woolf’s Orlando
I’m apprehensive of this choice. Woolf is one of those writers you can easily admire and quake before, simultaneously. But I’m happy to take on the challenge: Bad Habit Productions, a distinguished fringe theater company in Boston, is putting on Sarah Ruhl’s dramatic adaptation of the novel in early April, a few short weeks away. In a bit of cross-genre reviewing, I want to explore the novel before exploring the play and reviewing that specific production.

Orlando, written in 1928, could be described as a fictional, time-warping, gender-fuck of a book. A young male servant in Queen Elizabeth’s court traverses 300 years and a chromosome change to become a modern-day thirty-year-old woman. My Harcourt edition states Orlando is “a funny, exuberant romp through history that examines the true nature of sexuality.” No wonder Ruhl chose to adapt it, and no wonder I am excited to read it.

Gillian Flynn’s Gone Girl: Audible Edition
I know: I’m probably the only loser who has not either read this acclaimed bestselling thriller, or seen the new movie adaptation. But I’m happy I held out; a friend recently encouraged me to try the audiobook version, and I highly recommend it (I’m a third of the way through).

The book opens with the disappearance of a beautiful woman on her fifth wedding anniversary. Right away, we are on unsteady ground: the narrative cuts back and forth, between the inner-monologue of the not-bereft-enough husband, Nick Dunne, and the diary-retrospective-perspective of the missing wife, Amy Eliot Dunne. What actually happened on that 4th of July weekend in Carthage, Missouri? Only time will tell.

The audiobook makes the book even more interesting to evaluate. Narrators Kirby Heyborne and Julia Whelan are superb at portraying a panoply of disparate voices, voices different enough to be distinguishable and realistic enough to be sustainable. They definitely make me wish my commute took longer, and (almost) make me wish I had more dishes to wash and other household chores to do.

Elena Ferrante’s My Brilliant Friend
Not much is known about the pseudonymous Ferrante, an author who has chosen to remain anonymous to avoid the sharp glare of media scrutiny, both Italian and international. In an interview with the New York Times, Ferrante carefully clarified that her “signed” books are not technically anonymous; she also conceded that her self-imposed “absence” allows her works to “assert themselves without my patronage.” Her observation that the media loves to venerate the writer more often than they do the work is an astute one.

While the author remains shrouded in mystery, her books have received a great boost from the praise of The New Yorker writer James Wood, one of my critical heroes. But it wasn’t til my mom insisted that I find her a Spanish translation of the first hit novel in Ferrante’s Neapolitan series that I resigned myself to the inevitability of reading My Brilliant Friend. The novel covers a friendship between two women from Naples that lasts a lifetime, and I fully expect to be as hooked as everyone else when I finish reading it.

Bonus: Andrea Weiss’s Paris was a Woman: Portraits from the Left Bank
This was an impulse buy I picked up today, after rewatching the great new documentary She’s Beautiful When She’s Angry (2014). Considerably influenced by the hour and a half of watching badass women fight for equality in all spheres (including what I like to call “the right to alternative sexy-times”), I gazed at this book of photography and literary excerpts “highlighting the political, social, and artistic lives of the renowned lesbian and bisexual Modernists” integral to the female literati of Paris during the 1920s, and knew it had to be mine.

Bring on the late-night espresso and glass of Scotch: it’s gonna be a busy month of reading.