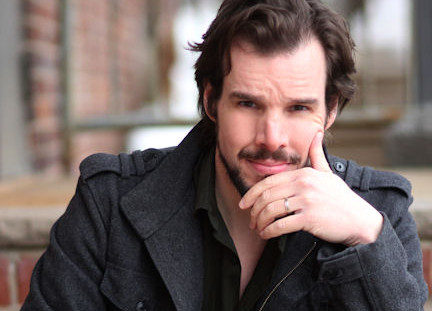 Kevin Cirone struck out as a musical playwright in 2014 with his new work Creative License. The piece is nominated for a My Theatre (Boston) Award for Best New Work. I was curious to ask Cirone about what motivated the project, and to learn more about the playwright and director of this show.

After your shining debut in The Wizard of Oz circa 1983, you dove headfirst into the world of theater. Are there any particular performances that shaped you as a director and a playwright?
Ha – you did your research. I learned a lot from every show I’ve done – in some cases what my strengths were, in some cases what I needed to do better, and in some cases what not to do. In terms of directing/playwrighting I think Tick Tick Boom was formative, in that it taught me how to balance a narrator-driven story and deal with abstract theatricality. Creative License certainly has some Tick Tick Boom elements in that sense, though not as much as it did in earlier incarnations.

You have experience in film, and success in writing sketches and in improv. What made you want to take on the challenge of writing a full-length, musical piece?
One of the things that drew me to theater from film in the first place was the immediacy and intimacy of the work, how something can be on its feet in a short time and receive immediate feedback. Creative License, which started as a screenplay and evolved – and keeps evolving – seemed to have a story and a pace that would fit best into that medium. And the music just came to me along the way.

What was it like collaborating on this piece with Spencer Elliott (co-composer and musical director of Creative License)?
Spencer was invaluable, period. I first approached this with the “I can do it all myself” mentality, probably because I’m a huge narcissist and perfectionist, but Spencer can do things with music (especially on a guitar) that I can’t even fathom, and could pick apart the melodies I wrote and apply tone and style in ways I couldn’t understand. He’s also so laid-back and easy to work with that it really taught me the value of collaboration. I would work with him again in a second.

I should add that music director Dan Rodriguez was also key in the process of mounting this world premiere / workshop, helping me to finish the music and put together all the detail work, like transitions, underscoring and an entr’acte, not to mention two songs that were added during the rehearsal process. Another great person to work with. I got really lucky on this project.

In reviews of the show, the characters in Creative License have been compared to those in the hit-musical Rent. According to the WordPress site for the show, your characters are less like NYC “prodigies” and more like “small-town dreamers” who want to create, not just survive. How would you describe the current fringe theater scene in Boston? Do you see more “neurotics” or more “Everyman’s”?
I think there are a lot of both. There are so many art and music institutions around Boston that naturally we’ll have our share of prodigies, but I think there are also people like me who come from other disciplines, have stories to tell and the will to tell them. The balancing act I struggled with is not to try to be something you’re not – don’t fall in the trap of trying to something erudite or cerebral just because that’s what you think that’s what people expect. Tell the story you want to tell, and absolutely do the work of workshopping and polishing it, but ultimately tell it in a way that speaks to you, not to some unknown face in the void.

What’s next for Kevin Cirone? Any new writing projects coming up?
Well, I’m still polishing Creative License, for one thing. I still think there’s at least one more iteration that I want to see on its feet before I put it away for a bit. And maybe I’ll perform in it this time and leave the directing to someone who knows what they’re doing! After that – the funny thing is, the most consistent feedback I have from Creative License is that they want to see MacDuff made into an actual show [laughs]. I’m actually taking a stab at something in that vein, but it’s going to take a while to come to fruition. I’ve also got two straight plays in the pipeline. Apart from that, I’m performing as much as I can and seeing what the next inspiration will be.