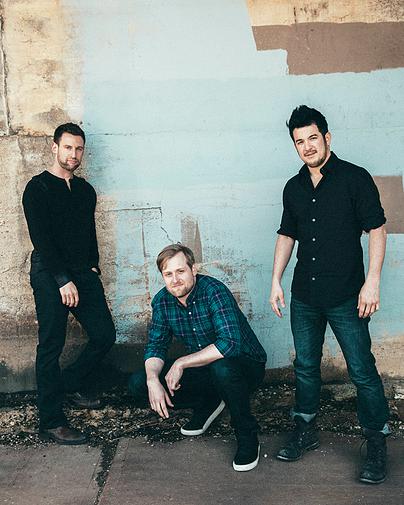 The Chicago Sun Times says, “The group’s two violinists and double-bassist look and act more like an indie-rock band” and Sir Simon Rattle calls them “the future of music.” What they are is Time For Three or Tf3, a trio of American string players who are setting the world of classical European music on fire.

The trio were in Toronto in February to play three concerts with the Toronto Symphony Orchestra (TSO) but double-bassist Ranaan Meyer has a bone to pick with Air Canada – they wouldn’t allow his instrument on the plane. “It’s the only airline in the world!” he says, noting he’s had no issues anywhere else. It left him scrambling to find an instrument to play for the TSO dates, but the vagaries of the road are not something new. “We’re almost always on tour,” he laughs.

After the Toronto dates, they’re stopping to record and then proceeding with a tour of the American east coast. Then it’s off the Sydney in August to play at the renowned Sydney Opera House. They’ve had concertos composed for them and premiered the works of prominent contemporary composers. Their combination of superb musical skills and sheer entertainment value has brought them acclaim across the globe – but it all came together more or less by chance.

The three – including violinists Zachary (Zach) De Pue, violinist Nicolas (Nick) Kendall – met while they were studying at the Curtis Institute of Music in Philadelphia. Their affinity for each other’s playing was apparent immediately.

“We’d all played in so many different ensembles, even as young musicians,” Ranaan recalls. “We’d gotten hired for a gig and tried to throw something together. It turned into the biggest party rehearsal.”

They played the gig – a corporate function – and blew away the crowd, getting a huge reaction rather than the polite applause typical of such jobs. It was only meant to be a one-time ensemble but they were having so much fun they decided to try it a second time and got similar results.

Along with finding a groove that they could share and play in, the trio shares a looser approach to the classics, breathing new life into a genre that is often seen as staid and stuffy. “We were all on the liberal side of classical music,” he says. In addition to the classical repertoire, they’ve been known to play mash-ups of Katy Perry hits and ventured into different genres like bluegrass and folk music. “It’s a culmination of different styles with the sophistication of classical music,” Ranaan observes.

He credits the way they got together for the infectious energy and enthusiasm that lights up their performances and the trio’s work in general, comparing it to the innocent joy of the students they worked with at the Oakville Suzuki music school during their stay in Toronto. “All they care about is having fun with their instruments,” he says. That’s what fuels Tf3 too. “We weren’t thinking about money or being famous or any of that.” In the absence of any professional pressures, they were able to develop the fun along with the music. “We were idealists. We empowered each other. “

That fresh approach to classical music is one they’ve taken into specific action in a residency with the Indianapolis Symphony Orchestra. After sitting down with conductor, they found a common vision for developing a concert series designed to appeal to the younger demographic that is so often lacking from classical music audiences. The initiative has been hugely successful. Ranaan reports that their concert series has been routinely sold out and that 95% of their audiences come from that target demographic of 20 to 40 years old. “It’s about presenting it in a way that’s acceptable to modern audiences,” he said.

Success speaks for itself; it seems like they’ve got that equation down right.