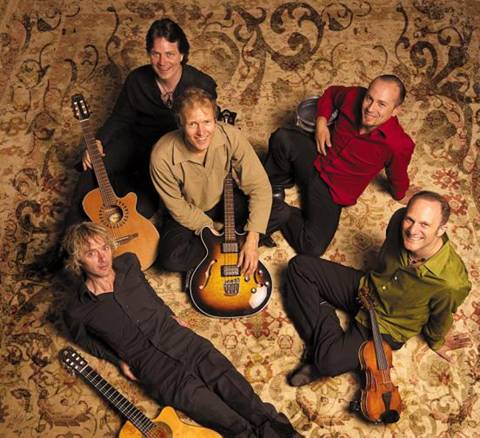 Chris McKhool & The Sultans of String

With a new video, the well-received release of their album Symphony! last year, busy touring schedule (including a recent dates across the U.S.) and three major gigs coming up before the end of the year, you could say Toronto’s Sultans of String are about as successful as an indie world music band could possibly be.

How does a band – any band – not only get by, but thrive in the 21st century music industry?

“There’s almost no retail left,” acknowledges violinist and founding member Chris McKhool, pointing out the preponderance of online sales and marketing in the music business. Still, there’s one golden avenue left. “The one thing you cannot replace is the experience of the live performance.” Live performance has always been the cornerstone of The Sultans’ strategy, keeping them with a busy playing and touring schedule.

Their music is truly one of a kind, combining influences from French manouche gypsy jazz to Cuban rumbas to Spanish flamenco and the hypnotic appeal of Arabic folk music. Chris grew up in a Canadian Lebanese-Egyptian household surrounded by music. The Sultans’ music reflects his Arab heritage directly in tracks like The Road to Kfarmishki from the latest CD. “You can’t help but have that influence.”

The group was formed several years ago in a chance meeting between Chris and lead guitarist Kevin Laliberté. “I was playing in a jazz bar on the Danforth,” he recalls. “Kevin filled in for another guitar player.” Not long after, the group played an extra-long gig where they had to come up with a set or twof of music on top of their usual repertoire and improvised to fill in the gaps. Chris heard Kevin’s trademark ruumba/flamenco guitar work and the collaboration – and their sound – was born. The band sets the bar high for musical excellence and the members have been acclaimed for their playing chops wherever they’ve gone on the worldwide festival circuit, including a mention in the U.K.’s Maverick Music Magazine.

“It’s kind’ve the antithesis to boardroom rock,” he says. “I love pop music,” he adds, “but it’s meant to be ephemeral. We strive to make real music by real people, telling the stories of real Canadians.” He’s realistic about what that means for their chances at mass media exposure. “We’re not rock, we’re not pop – we’re never going to get on those top 40 stations.”

One of the keys to their ongoing successes has been their ability to connect with diverse audiences through live shows. Two of their upcoming concerts see them playing with the Ontario Philharmonic, a 50-piece ensemble. Chris sees it as bringing together both the traditional classical music audience and those who are already into the world music scene.

Still, musically speaking, the project presented its own set of challenges. “Most of the songs we wrote are improvisations,” he explains. “We’re taking that to the absolute end of Western art music.”

“People have a wider pallet of acceptance than they realize.” He points out that social media is tailored to individual tastes and many people seldom venture beyond those self-imposed borders. “Being able to introduce people to new music – that’s even cooler,” he says, recalling the first time he ever heard Indian classical music. “Just realizing how big the world was! I love seeing great art no matter where it comes from.”

The third concert they’re playing will be at Toronto’s Koerner Hall as part of the Sultans and Divas concert to showcase Canada’s Arab music scene. Now, most Canadians would probably be surprised to hear there was an Arab-Canadian music scene. “There’s a little bit of everything in Canada,” Chris laughs. “We live in a patchwork of neighborhoods. ”Chris points out that the Arab music scene – like other immigrant music scenes – thrives outside the spotlight in often little known enclaves. “If you’re in downtown Toronto, it’s hard to hear about what’s going on in some small restaurant in Brampton,” he says.

Their latest video for the song Marry Me was shot at one of Chris’ favourite spots in town – on the hill on Broadview overlooking the Don River valley. “We shot it over a couple of hours in September. It took us a whole year to find that sunset day.”