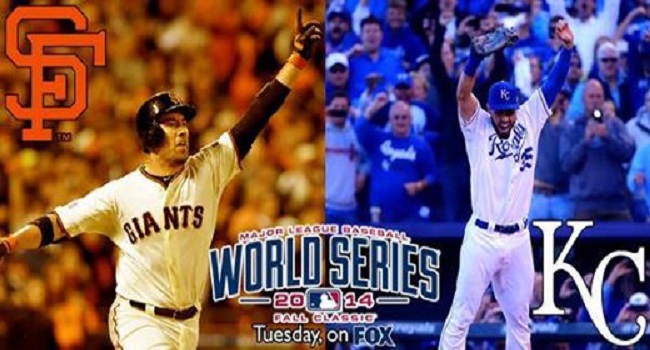 Tonight the World Series will kick off with the San Francisco Giants facing the Kansas City Royals. The two wild card teams will battle it out over a course of seven games (if necessary), marking the end of the MLB postseason. The fall championship is sure to be full of excitement and surprise as the underdog Royals come up to test the resilience of the Giants, who have won two out of the last four World Series. Will an undefeated postseason be enough for Kansas City to shake the drought and overtake the San Francisco dynasty? Or will the west coast remain true veterans and hang on to claim an 8th championship title? Let’s take a look at what each team will be bringing to the field and who will be swinging it out of the park to claim the 2014 World Series title.

Kansas City Royals
The Royals will be bringing the momentum that comes with making the playoffs for the first time since 1985. The Kansas City team are also riding the wave of 8 straight wins. They have won every game they have played since the beginning of the postseason. The American League Champs will have to keep the games fairly close to mitigate the Giant’s home- run potential of Buster Posey (.311 and 22 HR’s during regular season) Hunter Pence, and 3rd baseman Pablo Sandoval. However, with a bullpen as stacked as the Royals, the sought after 6 point lead should be achievable. The teamwork of Wade Davis, Greg Holland and Kelvin Herrera is a relief trio that dreams are made out of. So far, Davis and Herrera have rocked it in getting the ball as close to Holland as possible. The Kansas City players have posted stats that have not been seen in relievers, as all three of them have post sub – 1.50 earned run averages. The Royals do not just have a bullpen to brag about, they also are arguably one of the fastest teams of the season. Outfielders Jarrod Dyson, Alex Gordon and Lorenzo Cain are notable fast runners and can lessen the potential of successful hits, lending Kansas City the advantage of speed. The team has also stolen 154 bases this season, leading the MLB scoreboard. This level of speed will be sure to keep the Giants on their toes as they come face to face with the team that swept them 16- 6 during the regular season. Giants, welcome to Kansas.

San Francisco Giants
Kansas has speed but San Francisco has the advantage that comes with success. With a potential 8th World Series Title, the Giants has a payroll, $148 million (50% higher than the Royal’s $91 mill) to back the power studded roster. Weapons such as Posey, Pence, Sandoval and Bumgarner are hidden gems among the already strong team. These All- Stars have the experience and stats necessary to beat the younger team. Bumgarner, with an era of 1.42, has had a streak of 23 scoreless innings and as the starting pitcher in the first game of the World Series, the Giants are hopefully off to a strong start. Buster Posey also serves as an aggressive addition to the team through not only his hitting but also his skills as a receiver, helping pitchers get strikes. The Giants are a stacked team, even bringing Manager Bruce Bochy in as a notable power behind their success. Bochy has compiled a 30-11 postseason record since 2010. Starting his career with the Giants in 2007, the ‘greatest postseason manager of all time’ has seen his team win two World Series Titles along with three National League Championships. He’s a serious player in the baseball world and we all know how serious San Francisco takes their baseball. This year going so far as to block Lorde’s hit, ‘Royals’ from the radio, as she took inspiration from a picture of former Kansas City third baseman George Brett for the song. Kansas should rally their troops, because the Giants are coming to town and they are hungry for an 8th ring.

With the matchup of the wildcards, the newly undefeated facing off against the power of seasoned veterans, the Royals vs. Giants series is bound to be exciting. The MLB has also dedicated the first four games of the 110th World Series to various causes. The first game will be dedicated to the military, veterans and their families and the second game will be in name of ALS Awareness and Education. The third and fourth will respectively be dedicated to the Fight Against Cancer and Youth Outreach. If the teams prove to put up as much of a fight as they are said to, we are in for a seven day whirlwind of some great baseball.