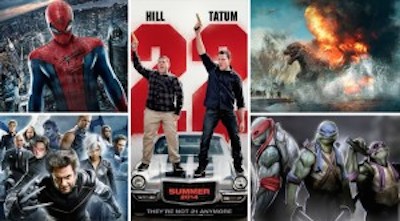 What Happened to Summer 2014 at the Movies?

The statistic all over the Internet, troubling studio executives and producers of the world, is the domestic summer box office was down 14.6 percent from last year. Some films found footing in this drought, especially good movies. I think there are lessons to be learned that could help change things, but will anyone listen?

Make more films about women
I think I have said this about every year; films about women do well, even in the midst of bad to mixed reviews. Last year The Heat starring Sandra Bullock and Melissa McCarthy made 159 million (domestic). Jennifer Anniston also helped We’re the Millers make 150 million (domestic). That’s just last year, I could cite countless examples from the last few years. On to this year!

Angelina Jolie was the queen of the box office this summer. Maleficent opened with a solid opening weekend, 69 million (domestic). While other films were opening at 90 plus, Maleficent never lost ground, and the percentage drop from week to week was small, help this film about a misunderstood character, to gross 238 million at the domestic box office.

Scarlet Johansson proved she could open Lucy, to great numbers (43 million), without the franchise factor. Lucy like Maleficent had mixed reviews, but the film grossed 119 million at the domestic box office. Time to up the ante Kevin Feige, and make a Black Widow film (more on Marvel later).

Shailene Woodley was the other female star of the summer, in the midst of explosions, and laughs her star power helped open a romantic drama, The Fault in Our Stars with 48 million at the domestic box office. The films total domestic gross was 124 million. Woodley also starred in Divergent, which was released in March and made 150 million. While both of these films come from popular books, this formula has not always materialized success at the box office.

These are just three example of how women make money at the box office, but for some reason major studios just do not get it year after year.

Sometimes new is better.
Enter the Guardians of the Galaxy. As an avid comic book reader I knew all about Peter Quill aka Starlord, Gamora, Groot, and co., but most had never heard of these band of misfits. These misfits now have the number one film at the domestic box office, and Guardians will probably be the first film to cross the 300 million mark.

Captain America: Winter Soldier was Marvel’s other release this year, which came out in April, and the film is second at the domestic box office, and performed well, it’s time for Marvel to realize the power of their brand, and expand to characters like Black Panther, Captain Marvel, and other lesser known people because if you build a good film, they will come.

People did not pay attention to film reviews for either of these movies, especially in China. Age of Extinction made more money in China than it did in the US, and is the first film to do this, this startling trend continues the trend of foreign markets controlling every aspect of the domestic box office, and studios churning out crap rather than well made films.

On the other hand Godzilla and Dawn of the Planet of the Apes could fit into this category as well, Apes was far superior, but they both made around the same of money at the domestic box office. Both were visual effects marvels on different levels. I think Apes is the best example of nostalgia reborn into well-made films.

SONY and Fox play the super-hero game
Can they? I just bought Amazing Spider-Man 2, and while I enjoy it, the film is sloppy, and SONY only has the rights to Spider-Man so their franchise ability is hindered. They have a Sinister Six film in the works, which is only about the villains, I am confused, is SONY going to try and humanize the Green Goblin? I think SONY needs to look at what they have done with most recent Spider-Man franchise, and re-evaluate, for the 2018 release of the third film. The film was also the lowest grossing, of any Spider-Man film, and barely made 202 million.

Fox brought back Bryan Singer to directed X-Men: Days of Future Past, and the film performed higher than almost any other past X-Men film, earning 233 million. Part of this was because of the blending between the new and original cast, but also because it was well made. FOX is in it to win it; SONY has some evaluating to do.

Funny R-rated films do better (most of the time)
Neighbors and 22 Jump Street, were the funniest films of the summer, I would argue that 22 Jump Street is miles ahead better, but they were both well made, there is the key. Funny movies have to have a strong creative mind, and the ability to keep their material in check. These two films landed the dismount.

Tammy, and A Million Ways to Die in the West did not. Tammy ended doing fine because of Melissa McCarthy, 83 million domestic, but West was the bomb of the summer. West was not funny, it was MacFarlane’s brand, and type of humor, which was shoved his shtick down the audiences throat, and failed.

Where have all the summer indies gone?
Boyhood did the best of all independent cinema released this year, and has earned 19 million dollars and counting. Boyhood is the best film of the summer, and will most likely be the best-reviewed film of the year. The interesting thing about this summer is that it felt like there was shortage of films that provide an escape from the explosions. It seems like television is the place for deeper meaning, while film is the place for explosions now.

Begin Again, and A Most Wanted Man fit within this category, they each earned 15 million. Chef also fits this category and earned 30 million; let’s get these films larger audiences, and keep them in theatres longer.