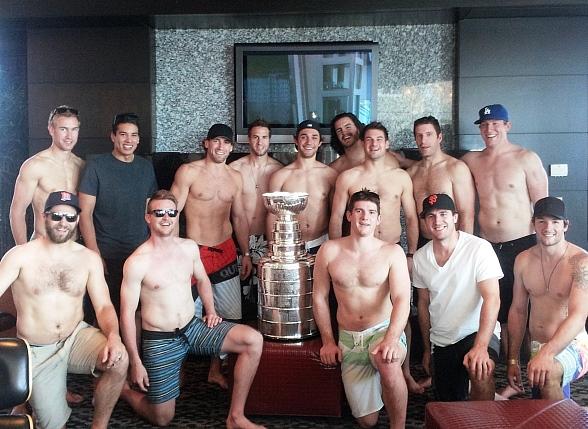 The Stanley Cup. The name induces a sense of respect, honour and tradition. As the holy grail of trophies, it’s legacy and those of the names engraved on the silver and nickel cup shines through the dreams of hockey aficionados. It has been spurring generations of players to 5 am morning practices, gruelling games and icy fights. For some it is about the title, for others it is about the legacy but for most it is about the game. As Stompin’ Tom Connor succinctly put it “the good old hockey game is the best game you can name and the best game you can name, is the good old hockey game.”

The Stanley Cup Playoffs are often an emotionally, physically and mentally tough period for players as they battle it out on the ice in an effort to win their names engraved on the notable cup. To celebrate their win, the players from the winning team each get one day with the cup to do with it what they want. While some return to their hometown to grace it with the presence of a silver dream, others have participated in wild antics with the accompanied trophy. The trophy has an appointed Keeper of the Cup from the Hockey Hall of Fame that accompanies it all over the world; most recently Ontario native Philip Pritchard has travelled with it although there are three other Keepers. As you might guess, this has resulted in stories that are legacies of themselves, with dogs eating out of it, it being tossed off of a roof and a baby relieving themselves while sitting in the cup (there’s a joke in there somewhere). The L.A. Kings are the 2014 winners of the Stanley Cup Playoffs. Pritchard has taken to social media to show off the players ‘day’ with the trophy. Let’s take a look at some of the memories the cup has gained through recent years.

1) Florida Panther Willie Mitchell who formerly played Defense for the L.A. Kings, took the cup on a trip with some buddies. This is how you do a fishing trip.

2) Anze Kopitar, Centre for Kings took the Cup on a helicopter ride over Slovania, a trip to a church and a boat ride on Lake Bled.

3) Nelson Emerson who works in player development for the Kings fulfilled a true Canadian fantasy by taking the cup on a Timmies run.

6) Bernie Nicholls might be hard to spot but the Stanley Cup definitely isn’t.

7) Willie Mitchell makes the list again as he celebrated the King’s win on by taking a helicopter to the top of a mountain and drinking champagne with his family and the cup.

So far we have seen helicopter, boat motorcycle and horse rides. It has also travelled in tanks, airplanes and vintage cars. The cup has been all over the world visiting hockey players’ home countries as well as uplifting the spirits of troops on deployment. It has been used to drink cereal, champagne, beer and vodka for humans and dogs alike. You could say the Stanley Cup has been around. It is the image of tradition and stands for the hard work and dedication of all hockey players. If you had one day with the greatest trophy of all time, what would you do with it?