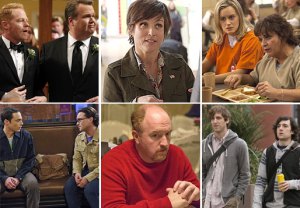 Can Modern Family tie Frasier’s record for the most wins in a series category with 5 wins? Will first year show Orange is the New Black, which is more of a drama in my opinion, do what Desperate Housewives could not, win in this category as a dramedy?

Last year there were two big surprises in the supporting acting categories; Tony Hale beat the Modern Family men, for his role in Veep, and Merritt Wever pulled off the biggest and most shocking Emmy win for Nurse Jackie. Wever was snubbed this year, not shocking, I still do not understand how she won, but will there be other wins like that this year?

Like within the drama categories each series in the Comedy Series race submits 6 episodes, and each actor submits one episode. One thing I did not mention in the in drama series predictions is that if an episode ends with a “To be continued” or has a second part there is a way for actors to submit a longer tape submission. On a side note I predicted both of the Guest Acting category winners in the comedy categories.

Over the years I have thought The Big Bang Theory would pull off a Friends-like 8th season win, but I do not think this show will ever win this category. Silicon Valley and Louie fall in to the same category as Curb Your Enthusiasm, too divisive, with many characters that could unlikeable to many voters. That leaves three contenders. Like with drama series the winner of this category is based more on the “prestige factor” and buzz. So who fits the bill here?

Veep has the prestige, it’s a show about politics, which always do well, it has some great people behind the scenes, and in front of the camera. Many people have also stated that this has been the show’s strongest season, which I would agree with. This helps with the buzz factor, and the show has more nominations than ever this year, included a writing nomination for the first time.

Orange is the New Black has prestige, but it’s the buzz that would carry this show to a win. Orange is the New Black recently released its second season, and the second season got just as strong markings, if not stronger than the first, and people are paying attention to this. The cast is all over the talk show circuit too, and keeping the show visible in people’s minds. I think this is a strong reason why this show has very good odds to win.

Interestingly enough Modern Family is low on buzz, and I would argue prestige as well. Many have stated that there is “Modern Family fatigue” but the show did well at SAG, and with the actors being the largest branch in this Academy this could help. The show has a history making moment on the line as well, with a fifth win. This was its strongest season in two years, and the gay marriage stuff could help, they also submitted great episodes.

I know based on tapes Melissa McCarthy is competitive, and she could spoil, but this is Julia Louis-Dreyfus’ win for the third year in a row!

I think this is the toughest acting category to predict in the comedy series categories because it is continually the weakest. My pick would be Louis C.K., but he will never win this category, the same way Jerry Seinfeld and Larry David could not win in this category. Cheedle is out too, because his celebrity can help him win at the Globes, but not the Emmy Awards.

Part of me wants to go out on a huge limb, and pick Matt LeBlanc, he has now been nominated in this category six times with no wins, which means he is very likeable, and the show is about an actor, which voters love. This is a big limb, but it’s one I am willing to walk out on.

Parsons has won this category three times, and is drunk once again, and his episode is good, but I do not think he will win his fourth this year.

Enter two new men to this category, William H. Macy for Shameless, and Ricky Gervais for Derek. Macy is the most respected actor in this race, and he has a shot, but I am not sure he does enough to win. Gervais episode has the heart, and is the heavy favorite with many based purely on episode, and I think this episode could help him win. I am going to go out on the limb.

This race is between two veteran actresses Kate Mulgrew in Orange is the New Black, and Allison Janney for Mom.

Janney’s role is the thing Emmy wins are made of; she is crazy, funny, and her performance does so much to make Mom a better show. The episode she submitted is just hilarious, and she is great.

Mulgrew is also a force to be reckoned with on the show, and at campaigning. Mulgrew is an amazing actress, and the flashbacks, and present day moments are stark contrasts for the role.

This is tough call, but I give the slight, slight edge to Mulgrew.

Before the tapes were announced this was Braugher’s in a landslide, but his episode is very week. The only way he could spoil is if voters are astonished at his comedic timing regardless on the episode.

I would argue that none of the tapes stick out, but Jesse Tyler Ferguson has two tapes essentially, and he shows so much range in both tapes, and at the moment he is my predicted winner; he is also the only cast member who has been nominated for all five seasons outside of Ty Burrell.

I do think Burrell could win, he is well liked, Hale could repeat because he is funny, but I can’t see this happening.