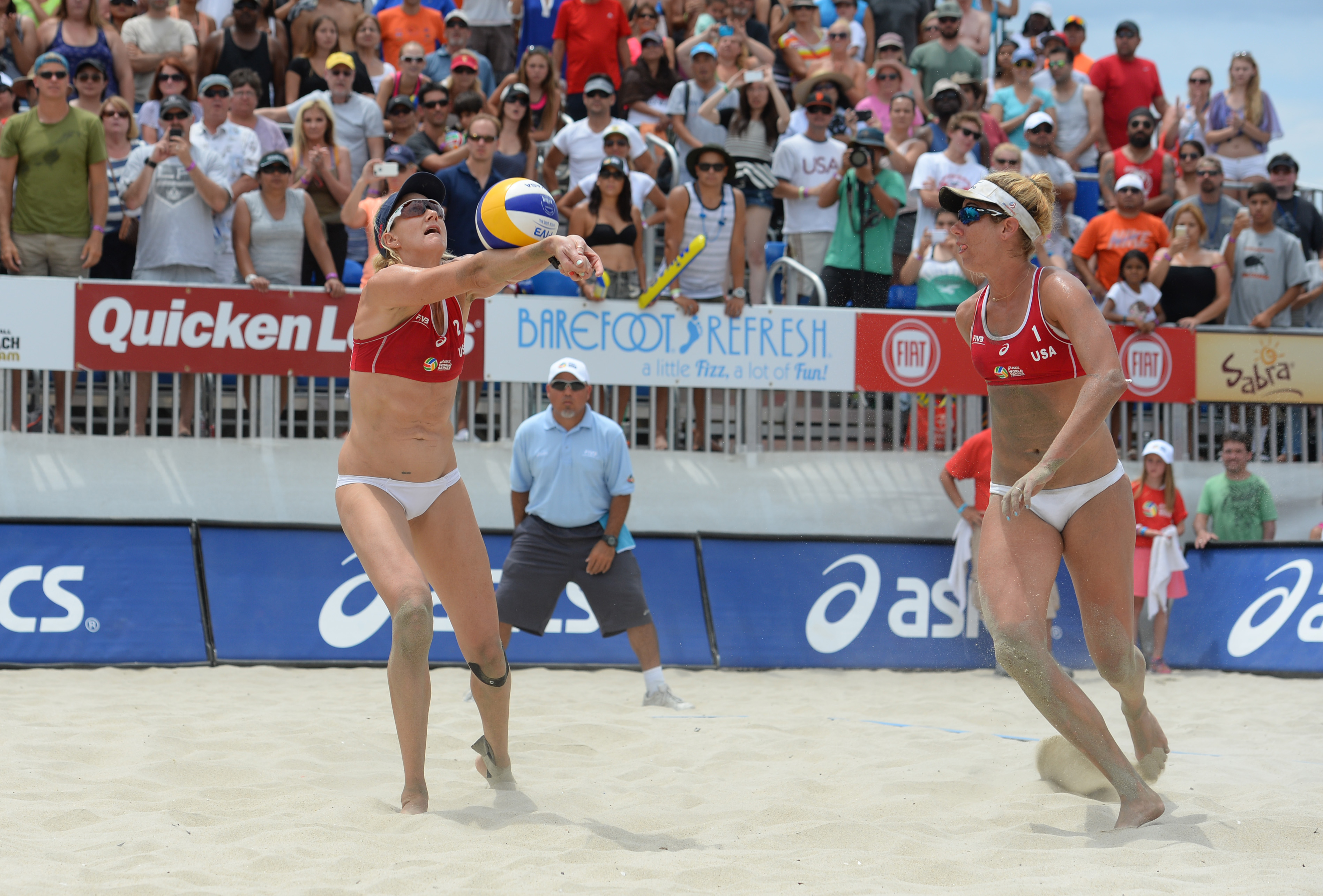 The sun was shining. The alcohol was flowing. The atmosphere was electric. And America put on a show for the rest of the world to see.

As simple as that opening headline may sound, it perfectly sums up my weekend spent in Long Beach at the 2014 Asics World Series of Beach Volleyball. I got to experience the WSOBV firsthand, and for my first ever pro volleyball tournament, it did not disappoint.

Well, I actually lied about that last statement. I have been to one other volleyball event. But it’s hard to count a 1988 indoor exhibition match as an authentic tournament experience, but it did give me my first taste of the sport.  At the tender age of 9, I still remember in vivid detail a Karch Kiraly lead US squad, the very same team that captured gold in Seoul, trouncing the much-revered Cuban national team. That was also the exact moment when my fascination with everything Karch Kiraly began. Which of course lead me to beach volleyball.

While some kids were dreaming of becoming astronauts, I wore out my old VHS copy of Sideout and constantly espoused to my parents about the virtue of one day becoming a professional beach volleyball player. Obviously, that dream never fully transpired. Just ask my parents about my fascination with the Frugal Gourmet and my desire to be a chef. Yet another dream that sounded much better in my head. Some things just aren’t meant to be, so I had to transfer that passion for the sport over to the spectator side. Since that point, it’s always been somewhat of a goal to experience a beach volleyball tournament up close and personal. And with the WSOBV, I can now cross that off the proverbial bucket list.

Which brings me right back to present day and my time in Long Beach for this weeklong tournament. First of all, my hat goes off to the FIVB and to Asics for putting together such a tremendous event. The weather was perfect for beach volleyball, and who could have picked a better locale than the LBC. It’s the one week out of the year, where you can legally drink on the beach, and if that wasn’t enough, the musical acts they brought in to play the event, kept the party rolling all throughout the weekend. It was an atmosphere unlike any I had ever experienced. It was the laid-back beach communities of Manhattan, Redondo, and Hermosa Beach mixed with the colorful characters out of the LBC. But all unified under one banner…“U-S-A!”

That merely sets the stage for the true headliner of the weekend. The incredible quality of matches I had the chance to witness. The WSBOV brought together the best teams from all across the globe to compete in what is sure to be a preview of the 2016 Olympic Games in Rio de Janeiro, Brazil. This tournament was a virtual who’s who of athletes on both the men’s and women’s sides, and to say the competition was steep, would be an insult to just how competitive this tournament truly was. It took a flawless performance from both the US men’s and women’s teams to come home with the gold.

On the men’s side, the top-seeded team of Phil Dalhausser and Sean Rosenthal rolled through the men’s semifinal, cruising to a straight set victory over the German team of Alexander Walkenhorst and Stefan Windscheif. And in the other men’s semifinal, the Polish team of Grzegorz Fijalek and Mariusz Prudel outlasted the US team of Theo Brunner and Todd Rogers to set up a rematch between Dalhausser and Rosenthal. Just one week earlier, Fijalek/Prudel defeated the American team 2-1 in the in the finals of The Hague in The Netherlands.

On Sunday, the home cooking proved too much for Fijalek/Prudel to overcome. After dropping the first set 24-22 in a heartbreaker, Dalhausser/Rosenthal finally came to life and took control of the next set for 21-17 victory. In the third and final set, team USA broke the 5-5 tie with a monster block from Dalhausser and never looked back, winning the final set by a score of 15-9. The final medal standings had Dalhausser/Rosenthal taking home the gold, Fijalek/Prudel with the silver, and the other American team of Brunner/Rogers going home with the bronze.

The crafty veteran presence of Dalhausser and Rosenthal was simply too much for any of the other teams to overcome. The gold medalist US team played in five different three-set matches throughout the WSOBV and kept finding ways to win, including holding off a young Polish team who looks poised to make some serious noise in the near future. Even at 34 years of age, both Dalhausser and Rosenthal have been playing like they recently discovered the fountain of youth, and this event could give them just the boost they need to keep rolling through the rest of the season.

On the women’s side, the top-seeded American team of April Ross and Kerri Walsh Jennings endured a few close calls in their qualifier and quarterfinal matchups but still managed to make their way into the semifinals, where they faced a talented Slovakian team of Dominika Nestarcova and Natalia Dubovcova. In the semifinal, Ross/Walsh Jennings dominated the Slovakians, winning in straight sets 2-0. In the other women’s semifinal, the fifth-seeded Brazilian team of Agatha Bednarczuk and Barbara Seixas held off a tough challenge from Spain to advance to the finals against Ross/Walsh Jennings.

The WSOBV represented the 90th time the US and Brazil have met in the gold medal match, and unfortunately for Bednarczuk/Seixas, they caught the US team right when those two ladies were hitting their stride. Ross/Walsh Jennings came through with a straight set win over the incredibly talented Brazilian duo, and they did it in dominating fashion. Throughout the final, every bounce seemed to go the US team’s way and every spectacular play made by Bednarczuk/Seixas was answered in emphatic fashion by Ross/Walsh Jennings. The culmination of which precipitated in a gold medal sweep by the Americans. The final standings saw Ross/Walsh Jennings take gold, Bednarczuk/Seixas take silver, and the Slovakian team of Nestarcova/Dubovcova came away with the bronze.

With the ultimate goal being another gold in Rio 2016, the newly paired duo of Ross and Walsh Jennings definitely made a statement for themselves on an international stage. And for Walsh Jennings, a gold medal in the World Series of Beach Volleyball serves as yet another achievement in what is already a Hall of Fame career. Walsh Jennings continues to play at an incredibly high level with no signs of slowing down. Out of 199 tournaments she has played in (US and international), she has 119 victories to her credit, giving her the highest winning percentage of any international player all-time. She also has the most career victories by any woman in the sport. The WSOBV also marked a huge milestone for Walsh Jennings. This is her 50th FIVB tournament win, making her the first female to ever accomplish that feat. She is now only the third player in FIVB history to accumulate 50 or more tournaments wins, regardless of gender. To achieve that in front of a home crowd in California must’ve been the cherry on top of what was already a very successful weekend.

All I have left to declare is what a spectacular weekend this was for the sport of beach volleyball. I’m sure events like the WSOBV will only help to increase the sports’ already growing popularity and will show just how much parity there is around the world. Thank you Long Beach, FIVB, and Asics for showing me such a good time. If you’ve never been to a live beach volleyball event before, do yourself a favor and go. I’ve always considered myself a fan of beach volleyball, but being there in person, enhanced my appreciation for the sport exponentially. My only hope is that I can come back again next year for the 2015 Asics World Series of Beach Volleyball. In the mean time, I’ll just have to dream of being back in those stands with a Deep Eddy Vodka Sweet Tea in my hand while I chant “America! F@%# yeah!” with the rest of the LBC.