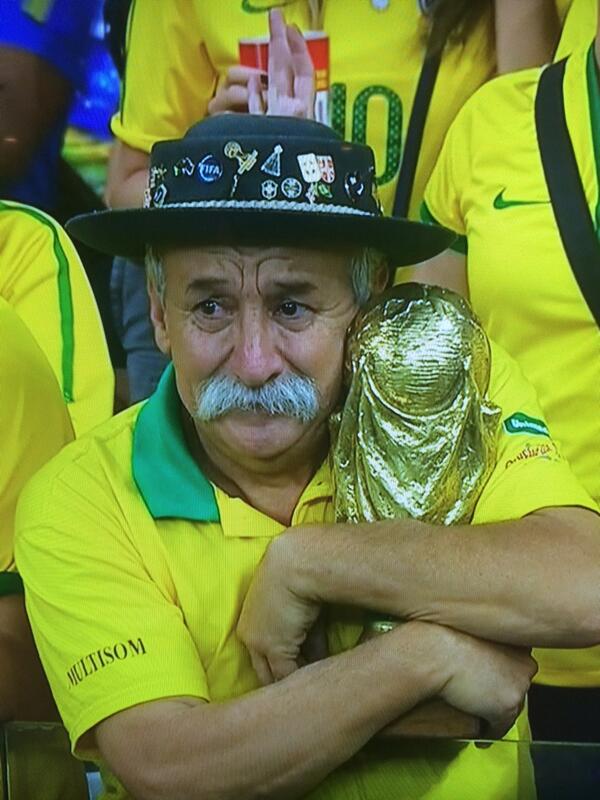 What Happened to Brazil?

If you did not watch the match, you’ve surely by now seen the highlights or heard the results of yesterday’s anticipated thriller between Brazil and Germany. If you haven’t seen the final score, just turn on any major news outlet, or any popular website, as it seems that is the only thing people are talking about today.

Heading into the tournament, it is fair to say that Brazil were one of, if not the favourite team to win the World Cup. For starters, they have home advantage, and if you’re wondering how big home field advantage can be really be, it is massive. In the Premier League 2012-2013 season, only one team had a better away record than they did a home record. That’s not an isolated incident either, as in Spain, 17 of the 20 sides had better home records than away, and only Milan performed better on the road in Italy.

Bottom line is, home field makes a huge difference, but not just because players thrive off of the crowd, which they do. Brazil are most accustomed to their hot climate. Other South American teams are obviously as equally accustomed, but European teams were and are not. Teams in Europe had just over a week before the tournament to practice in the country’s humid temperatures, while the Brazilians have had the advantage of playing their whole life in the muggy temperatures, allowing their bodies to be completely accustomed to the climate.

Furthermore, the home crowd puts pressure on the referees. Now, we could get into how FIFA refs are corrupt, but if you’re into that, that’s a whole other conversation. In a normal home environment, the crowd heckles and puts pressure on the ref to make calls in favour of the home team. Like any human, refs also can crack under pressure, giving a bit more leeway to home teams in many occasions.

Brazil were also considered the favourites going in because of their squad, specifically with the world’s biggest young talent, Neymar. Other teams have young talent, such as Colombia’s Rodriguez, Chile’s Sanchez, and Germany’s Muller, but it was thought that none would compare with Neymar. The kid is a genius. The epitome of a no.10 player; he can score, create, and score. I put double emphasis on score, as at the age of 22, he’s already scored 35 goals for Brazil, making him the 6th top goal scorer for the country, not to mention he also has 20 assists. Absolutely nonsense.

So, with all these advantages and reasons for them to be the favourites, what the hell happened to cause them to lose in such an embarrassing manner? Maybe the score line wouldn’t have been as different with Neymar healthy, as he surely would have been able to create something or score, but that wouldn’t necessarily have made a difference to Brazil’s defence, considering he’s a forward.

It is obvious that they missed their centre-back captain, Thiago Silva, who had to miss the game because of recurring yellow cards in the games previous and was instead replaced by Dante. In layman’s terms, replacing Thiago Silva with Dante is like replacing mayonnaise with miracle whip in your tuna salad. Sure, it’s a substitute, but everyone knows that the former is much better than the latter. The same goes for up top. When you have two Brazilians with the most Caucasian names in the southern hemisphere, Fred and Bernard, playing in place of Neymar, or even in place of former legends such as Ronaldo and Ronaldinho, you just know things just aren’t as good as they could be.

The thing about football is that it’s one of the most complete team sports out there. Even with the best player in the world on your team, you’re not guaranteed a win, or else it would a Portugal vs. Argentina final. It takes all 11 players on the field to play together to battle for a win, and quite frankly, Germany’s XI were much, much better than Brazil’s.

Just looking at their player sheet gets me giddy. I mean, when you have Klose, who is now the highest goal scorer in the World Cup finals with 16 goals, playing along side Thomas Muller, who at 24, with three World Cups left, has 10 goals, you’re bound to run up the score a bit.

And those goals are made easy to score when you have Ozil, who created the most chances in the Premier League last season, passing you the ball in his nonchalant manner. You also have Toni Kroos, who, while playing a different style than Ozil, is almost as equally creative and scores a bit more.

The Germans have a team that has the perfect balance of creativity, passing, scoring, and everything in-between. Not to mention their goalkeeper, Manuel Neuer, who decided to double as a sweeper this tournament. He has been much of the reason why Germany has had so few goals against. Every player brings a different aspect to the team’s game, allowing them to have the most complete and dominant team in the tournament.

Sure, the German’s had a better team, but it doesn’t account for how they beat Brazil in such extraordinary fashion. Much like trying to understand why some people genuinely enjoy brussels sprouts, some things just cannot be explained. For 10 minutes, it was as if the German’s played flawless football; like a world-class team vs. your Sunday men’s team. It seemed like every pass was completed, players were positioned exactly where they were supposed to be, and as a result, 4 goals in 6 minutes were scored. We saw the same thing happen earlier this year in the Super Bowl, when the Seahawks stunned the Broncos to a 43-8 defeat – it could hardly be explained why. Everyone was left bewildered.

Now, I’m not comparing football (soccer), to American football, but as we see from time to time in sports, some results are just so obscure, we’re left wondering what the hell actually happened. Obviously one team had to be better than the other, but going into the match, on both occasions, both teams looked to be equally talented and able – or at least not as different as the score line suggests.

Now some people are calling for a complete reconstruction of the Brazilian team. They want to see a complete overhaul of the team, including the ousting of manager Scolari – something I can’t help but disagree with, as he was the manager who won them the World Cup in 2002. As I mentioned, these things happen in sports from time to time, and it’s usually just a one-off. Brazil hadn’t lost at home in a competitive match in 40 years. It was also only the third loss in a total of 28 matches. Those are not statistics to rebuild a team. They’re a strong team who still have the potential to come third, so if they’re considering a complete overhaul because they lost in the semis, England and other supposedly “strong teams” who did not perform up to par should be searching for miracles instead of players.

About 13 or 14 players from the current Brazil team will be playing in the next World Cup, include Neymar. They’ll have four years to fix their kinks and bring in a few more young talents, which I’m sure Brazil has a plethora of. Assuming Scolari keeps his job, there is no reason the Brazilian side cannot make a chase for the 2018 World Cup in Russia.