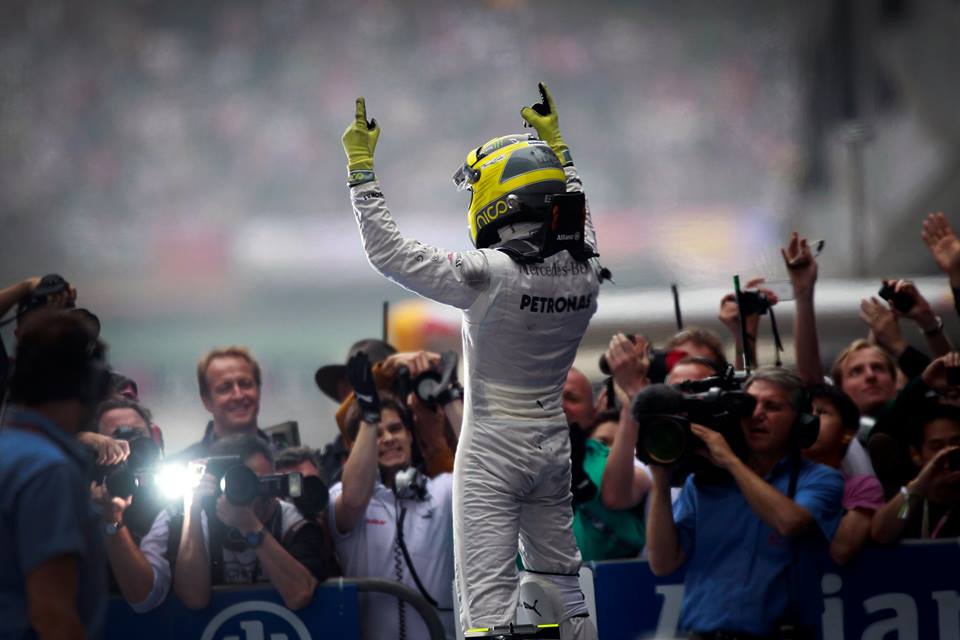 This week, Formula One travels to the land of the newly crowned FIFA World Cup Champions for the German Grand Prix. Between the Hockenheimring and the Nurburgring – the two main circuits where the race has been held over the last 50 years – the German Grand Prix has continuously provided us with dramatic and memorable races year after year.

This year, the race returns to the Hockenheimring for an installment of the German Grand Prix which could prove to be quite pivotal for the championship aspirations of two men.

Mercedes, in their home race, continues to be in top form coming off the back of Lewis Hamilton’s triumphant performance at his home race in Great Britain two weeks ago. This week, the pressure shifts to championship leader and fellow Mercedes driver Nico Rosberg, as it’s now his turn to contest for victory at his home track.

With Rosberg sitting on 165 points and a four point lead over Hamilton in the standings, this isn’t going to be a grand prix that decides who the title goes to by any means. Nevertheless, the race could swing the pendulum in a favourable direction for one of the Mercedes drivers on Sunday. Rosberg will be hoping it swings his way after his retirement in Great Britain let Hamilton back into the title race.

“I go to every race with the belief in my head that I can win,” said Rosberg in the buildup to this weekend’s race. “I am here to win and believe I can if I put things together. It’s always a challenge against Lewis.”

When asked about whether he believes Lewis has been faster than him this year, Nico replied “He’s always been quick so I need to get things right and need to put effort into it and every time I arrive at a track anew, I have to consistently, get things right.” While Rosberg leads Hamilton in the standings, Hamilton owns five victories to Nico’s three.

With Mercedes, it’s interesting to note that the team has a great opportunity this weekend to win their first home grand prix since 1954. This is mainly due to the outfit’s absence from the sport for the better part of half a century. However, since returning to Formula One in 2010, this year presents the team’s best chance to stand on the podium’s top step on German soil.

However, we shouldn’t get lost in all things Mercedes as we head into Sunday. I myself am quite interested to see if Fernando Alonso and Sebastian Vettel can rekindle some of the magic they produced two weeks ago at Silverstone. Their wheel-to-wheel battle for position in the race’s dying stages was a thing of beauty, and what true grand prix racing is all about. There’s no doubt that the “home grand prix effect” will motivate Vettel this week, but Alonso will also be hungry to find a victory in what could be his final season with Ferrari.

As for Alonso’s uncertain future with the Ferrari outfit, Fernando spoke this week saying “Every year now I get asked this question in July, maybe since I started in 2003. I haven’t talked with any other team and it’s not my priority.”

Interestingly enough, Red Bull’s Vettel was asked about the likelihood of a prospective move to the Ferrari camp next year, which prompted him to respond “Right now I’m very happy where I am and I’m really not thinking about what I’ll do in the future, but I wouldn’t rule out racing for Ferrari. You should never say never in life, but right now I’m very happy.”

Aside from the top dogs though, there are some middle-of-the-pack teams who are putting a lot of emphasis on this week’s race as well. For instance, Force India find themselves clashing with the likes of Ferrari, Williams and McLaren for position in the Constructors’ standings. That can be attributed partly due to Nico Hulkenburg’s impressive consistency, as he has scored points in every race this season and sits 7th in the Driver’s standings. Teammate Sergio Perez has held his own as well in 2014, despite scoring points in only one of the last four grand prix.

In looking for a big result at Hockenheim, Hulkenburg has been optimistic. “Even on tracks where we have been struggling slightly, we have managed to score points – for example, in Silverstone the car balance was not ideal, but we still came away with four points,” Hulkenburg stated in a press release.

In off the track news, Caterham continues to reshuffle its staff. With newly hired Christijan Albers now taking the reigns as team principal, the team is looking for immediate results as they try to get out of the basement in the Constructor’s standings. Currently sitting 11th out of 11 teams, their urgency might very well be rewarded in Germany if Kamui Kobayashi or Marcus Ericsson can put together a solid weekend.

Others who are overdue for a breakout performance are Ferrari’s Kimi Räikkönen and Sauber’s Adrian Sutil. Räikkönen, who had a terrifying first lap accident at Silverstone, has been underwhelming this year. A German Grand Prix that would see him bring his scrapes and bruises across the line in a points position would go a long way for the Finn. As for Sutil, both he and Sauber teammate Esteban Gutiérrez have been below standard thus far, so look for the team to make their presence felt on Sunday.

However, with the German Grand Prix sitting as the midway point of the 2014 calendar, it’s safe to assume that every team will be looking for more out of their cars and drivers. Valtteri Bottas is coming off of surprising back-to-back podiums in Austria and Great Britain. He and Williams teammate Felipe Massa – who was collected in the carnage of Räikkönen’s crash at Silverstone – will be looking to maintain their good form and reel in the 3rd place Ferrari team in the Constructor’s standings.

On the other end of the spectrum, Lotus has had a rather substandard season thus far, with Romain Grosjean in 14th place at 8 points and Pastor Maldonado in 19th and still looking for his first point. In my view, Maldonado’s days are numbered at the Lotus camp. On top of that, with his reputation for chronically retiring races, I’m not sure if another team would take a chance on him either unless he turns his season around promptly. This Sunday’s race would be a perfect time for him to have that statement race he’s been looking for, or else he may be without a seat next season.

As for my prediction, I can’t see anyone other than Mercedes taking the checkered at Hockenheim. Hamilton has the momentum after his win two weeks ago, and he would love to spoil Rosberg’s visit home. Rosberg, on the other hand, will likely drive like there’s a fire under him, as his home field advantage will surely have him motivated. Moreover, he’ll want to bounce back after not finishing in Great Britain due to a gearbox failure.

Regardless of who wins this week, the inter-team rivalry at Mercedes is shaping up to be a cracker. It’s somewhat reminiscent of Ayrton Senna and Alain Prost’s McLaren rivalry of the late 1980’s-early 1990’s. Then again, maybe I’m getting ahead of myself, because that was one for the ages. One race at a time I suppose. So for Round 10 of the 2014 Formula One calendar, all I can say is this one’s a coin toss folks. Take your pick.